'A Ministry Of Defense, But No Ministry Of Peace': A Celebration of Myanmar Poetry at the Irrawaddy Literary Festival by Dipika Mukherjee

By Dipika Mukherjee - August 25, 2018
NOTE: This article was first published on the Poetry Foundation website on May 21, 2014. The Irrawaddy Literary Festival remains one of the most interesting festivals I've participated in, and I feel privileged to have been a part of this historic festival, even though the patron, Aung San Suu Kyi, has not lived up to the ideals she represented in 2014.

The Champak, fragrant with white blossoms growing wild on Mandalay hill, perfumes the gardens of the Mandalay Hill Resort. This is where the 2014 Irrawaddy Literary Festival was held from February 14-16, with poetry read under white canopies amid the feathery foliage. Palm trees fringed tiny wooden pagodas; even the breeze was mellow.

In this most Zen-like of settings, the Myanmar poets read fiery words. Words to inspire the schoolchildren bussed into the venue from Myit Nge and surrounding schools, children with faces plastered with the yellowish-white thanaka paste, distinguishing them from the trendy young volunteers from the Jefferson Centre who spoke fluent English. There were very young nuns in light pink robes, and older male monks in robes of red and deep orange.
Bagan, Pinya, Innwa, Taungoo—even the tents were bi-syllabic sounds that rolled off the tongue. Naing Myint Lwin, who won a poetry contest at the Guardian newspaper in 1960, began with her prize-winning poem about the river Irawaddy:
As they reach the rich delta


The land they’ve formed year by year,
With pride and joy they murmur,
“We are a credit to Burma”.


Her English words, reminiscent of the Kiplingesque verses read on plantation verandahs peopled by colonial masters, were like nothing that followed.
As Pyae Phyo Ti began his poem, the young interpreter hidden behind the electrical equipment caught my eye. A device in my ear would sound the simultaneous translation into English, but the volunteers were very new to this. In an earlier session, the translator had collapsed into a fit of uncontrollable laughter at a speaker’s comment, which had clearly been irreproducible into English.


“The poem is titled 'An Interview with Mandalay'...or something like that,” began my interpreter, a grin in his voice. “Rhymes and rhythms in Burmese are difficult to translate,” he apologized, “but I will try.”
The poem "Scars from the Story of Scholars" is introduced as the story of Mandalay, but is a diatribe against the economic colonization of Myanmar by the Chinese. Much fist-shaking fury accompanies the words about people buying land and taking over local business, and the translation provided include “Brutally murdered” and “Demonstrations.” The poet ends with the thought that although rumor has it that Mandalay will become just another province of Yunnan, it is still not too late for action. 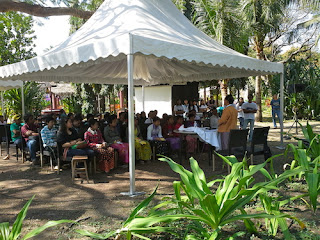 At the Q&A session that follows, a young monk strides up to the microphone, his intent clear in the hard set of his face: “The poem shows that you are a great nationalist. What if people are saying you are an extreme nationalist?"
The tent thrums with anticipation as the poet and the monk face off for a few seconds.
“Well of course, in Mandalay there are people of different races but what I worry about is the illegal entry of people from different countries.”
The poet pauses to catch his breath as the questions come from all sides, mostly belligerent. No questions are asked in English, and this becomes a contentious argument for national identity versus economic progress. Besides, only a handful of foreigners are in the audience.
Next is Maung Than Yu, a composer who has written songs about Mandalay as well as poetry. His voice too rises, and there is a lot of gesturing as he says:
A mother loves her children more than herself. So for the sake of a mother’s love, may all men cease war. We all have to walk the path of peace. Universities should teach peace.
We have a Ministry of Defense, but no Ministry of Peace. No country has a Ministry of Peace! Let us work together to set up Ministries of Peace in each and every country. Let us remove mines and bombs and have less fighting and war!
I do not talk of romantic love. The love I speak of is very maternal, pure and clean, peaceful. We are not reciting a poem but celebrating a convocation. A degree is given to scholars who have learnt the subject. Now a convocation for the doctorate degree of a mother’s love for the nation!

He strikes a chord in the audience; the questions are less hostile. There is a sense of calm as the last two poets, Nyan Myo Htei and Thin Thin Aye Hein, take the stage. 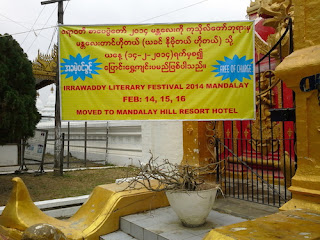 Later, I would discover that the sessions with the Burmese writers have been very combative, especially as controversy has dogged the second year of this festival. Official permission to use the Kuthodaw Pagoda as the venue—a historical site slated as the “world’s largest book”—was withdrawn on the eve of the festival and a writers’ boycott also suggested some powerful political maneuvering. The festival organizers had to scramble to find another venue, but the organizing committee, headed by resourceful Jane Heyn, ensured that the festival would go on.
The patron of the Irrawaddy Literary Festival is Daw Aung San Suu Kyi, now an elected Member of Parliament and a powerful member of the opposition possibly on the road to securing the presidency. Her presence was enough to speak volumes about the free exchange of literary thoughts and ideas that this festival sought to engender and Aung San Suu Kyi steered clear of any political rhetoric during her brief appearance, preferring to chat, fairly casually, about the literary influences on her own life.
But the impact of a festival like this was indisputable inside the many tents. Author Saya Kaung Thant spoke about Buddhist charity (“To donate, share –smile at least— it is a kind of donation. Feed a dog or a cat with the water in your house”) as well as democracy (“Refuse the fear and stand for the public with bright courage...only then will the journey to democracy begin”). His audience, mostly teenagers, listened with rapt attention.
Dr Aung Myint, a member of the organizing committee and an author, delivered an emotional closing speech: To be in a room like this, filled with the people of Myanmar chatting easily to foreign writers who had come from around the world, felt simply unbelievable.

Griselda Heppel said…
Very poignant to read this just after watching the UN’s strong criticism of the Myanmar government for their army’s brutal massacres and ethnic cleansing of the Rohingya. I’ve been to Myanmar and loved the country and the people - hard to believe Such horrors can be going on.

Thank you for this evocative article. You bring the different poets alive and while it’s difficult to get the quality of the poetry without knowing the original languages, the desire for peace and tolerance that comes through is both powerful and touching.

And I’d forgotten about ‘the worlds largest book’ - an extraordinary place! Would have been a perfect site for the poetry festival.
27 August 2018 at 23:46