The History Of The ClothesPeg: Ali Bacon tackles the demands of authenticity in fiction and in film.


Filming a trailer for my latest book with Gavin Allen Productions (see last month's post) is still a few weeks away, but a location recce has thrown up some matters of urgency.

As you will probably know by now, the book features encounters with early photography and while we’re not, I’m glad to say, planning to replicate the entire calotype process of 1843, even to give a flavour of what it was like demands a degree of historical accuracy.

Luckily we had an expert on hand who agreed with our idea that negatives were very often hung up to dry on a makeshift clothesline. Just one thing had as all stumped – what kind of pegs would be used to attach them? Surely the handy wooden spring clip (I even have some now mixed in with the flashy plastic variety) weren't in use back then?

Just in time my calotypist friend emails me with a gratifying quote from 1844, " let it merely be suspended in the air, and in the absence of a better expedient it may be pinned across a string by one of its corners." So off I go in search of the history of the clothes peg. 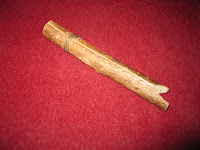 Googling reveals some ‘Victorian’ pegs made of a split stick, or two sticks bound, or nailed, together at the top. This one looks attractively primitive, don't you think?  Dead authentic, surely, and even if I last did whittling at guide camp, maybe I could actually make some myself?

But I do eventually turn up an article (The Economist no less) on the history of the clothes peg which tells me the ‘dolly’ peg - as used by my Mum and available passim for making dolls - was patented in 1809. Wouldn’t Messrs Adamson and/or Hill have simply raided the domestic washing basket and used what was used these? I also confirm that  the “new and useful or improved…spring clamp for clothes lines” came along earlier than I would have thought in 1853, but not quite early enough.

So it’s back to the old-fashioned peg –  But somehow these don’t feel quite right. Won’t they look too new? Can I age them by leaving them out in the rain or staining them? Or should I splash out on ‘vintage’ versions (i.e. shabbier models sold at a premium!)

Here I remind myself that the Victorians did not live in a world of antiques and sepia mists – they might just have bought some brand new clothes pegs like me. But authenticity, as someone once said, is not about accuracy. It’s at least in part about meeting the expectations of the reader/viewer and I just have a feeling that light bright pegs will look anachronistic even if historically they are perfectly okay.

Yes I am now truly obsessed and spend time empathising with my heroes in their candlelit rooms as well as Googling more clothes peg stuff just for the hell of it. I even turn up an exciting looking wire version of a ‘clothes pin’ which looks ideal for attaching paper, rather than clothes, to a line.

My heroes were nothing if not resourceful – even if these weren’t around in the shops or on the doorstep, maybe they would have made their own? But presumably only if they didn’t they have anything else to hand which would work. I abandon my designs on a wire coat-hanger as hopelessly extravagant.

So it’s back to the washing-line drawing board. Let’s get an old peg, some paper and string, and see if it works.

I’m sure this is what any self-respecting calotypist would have done.

Meanwhile if you have any clothes pegs which look like they could be very old, you know where to find me!

Ali's novel In the Blink of an Eye (Linen Press 2018)
is a re-imagining of the life of Edinburgh artist and photographer D. O. Hill. 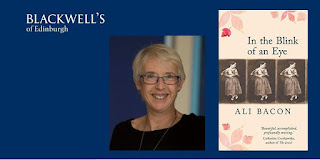 Join Ali for its Edinburgh launch in Blackwell's South Bridge, Edinburgh. on October 17th.
You can register for free entry here.

*Calotype of a bust of Daguerre by Rob Douglas,
21st Century Calotypist, http://www.papershadowsandlight.com/

AliB said…
Hi Susan. Yes very useful indeed and popular for lots of crafty pursuits I've purchased some cheap ones and will try to make look less new :)
22 August 2018 at 17:01

Umberto Tosi said…
What a delightful exploration: I salute your commitment to authenticity, even concerning a prop that might have been worked around by a lessor author! I'm old enough to have played with my grandmother's "clothespin people" - or clothes pegs, as you UK denizens call them - deeply involved long before action figures and video game avatars. I even penciled faces on them. LOL
22 August 2018 at 19:57