The Lure of the Land by Sandra Horn


We recently spent 10 days on the west coast of Scotland; a week in Oban right by the harbour, and the rest of the time in Fort William so we could go on the steam train to Mallaig over the Glenfinnan viaduct. Here's an Oban sunset: 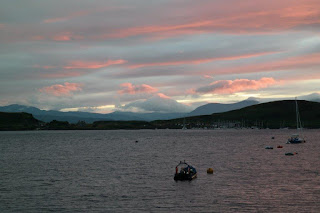 From Oban we had a sea safari and saw a whale, rocked about in the Corryvechan for a while (nothing like as fright/sick inducing as I’d feared!). We also went island-hopping (Mull, Iona, Staffa), some of us on a RIB and the sensible (or feeble)people, of which I was one, on proper CalMac boats. 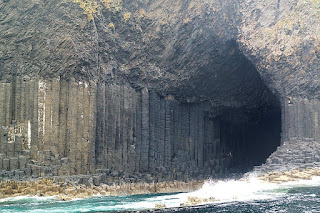 It was magical! I kept on thinking it ought to remind me of western Ireland, what with the sandy beaches, bays and islands off the coast – but it didn’t. It is as beautiful, but somehow seemed more grounded in the rocks. I don’t know what comparisons there are in terms of height, etc, between the hills of the Ring of Kerry and Glen Coe, but the atmosphere is completely different. Something about Glen Coe is dwarfing and chilling, even without its history, whereas one can feel right at home in Kerry with its dreamy beauty.  I’ve felt the same in Cumbria, in St-John’s-in-the-Vale – not dominated or dwarfed by the hills, but sheltered by them and feeling that I belonged there. I can’t explain it but I’ve been pondering it since. It led me back to Louis MacNeice (again, again):

In doggerel and stout let me honour this country
Though the air is so soft that it smudges the words
There you have it – the idea that there is something softer in the Irish landscape, something dreamier. He goes on to say

For the western climate is Lethe,
The smoky taste of cooking on turf is lotus,

MacNeice was deeply grounded in that landscape by birth and upbringing, as I am not, but for me it’s that ‘Let’s just sit here and forget the rest of the world, let it all drift by,’ feeling. Scotland was invigorating, even though it was as hot and sunny as I’ve known it, and Ireland was wreathed in mist and rain when we were last there, but still invoked MacNeice and also Tennyson’s Lotos-eaters and the ‘languid air’ of their island.

These feelings that a particular landscape invokes are strange because, I think, they are hard to predict and probably very personal. I don’t like heights but have braved a series of cablecars, including one with a rotating floor (EEEK!), in order to walk on a glacier – to walk in one, on another notable occasion, but you won’t get me up the lighthouse on Anglesea or the dome of the Duomo in Florence.  I can’t begin to explain the draw and the joy of a glacier on a high mountain or the deep discomfort of a winding, upgoing stair, but they run deep and strong.

Auden and Kipling have considered our place in a particular landscape and what it is that makes us feel enfolded and cherished. In Auden’s ‘In Praise of Limestone ‘ he posits that we are drawn to and are homesick for, limestone landscapes because like us they are fickle: they dissolve in water – and he likens the rounded slopes and secret cave systems  to a Mother:

What could be more like a Mother or a fitter background
For her son, the flirtatious male who lounges
Against a rock in the sunlight, never doubting
That for all his faults he is loved.

That’s it – the feeling of belonging and being loved in a particular place – or places.

In Kipling’s ‘Sussex’, my own home county, he makes a paeon of praise to the county Downlands, where the sheep-bit thyme smells ‘like dawn in paradise’ and he describes the land calling us home:

So to the land our hearts we give
Till the sure magic strike,
And Memory, Use and Love make live
Us and our fields alike –
That deeper than our speech and thought,
Beyond our reason’s sway,
Clay of the pit whence we were wrought
Yearns to its fellow-clay.

So there it is. Something in our human psyche is powerfully affected by landscape and it’s a uniquely personal thing. I don’t seek to understand it, I just live it and love it wherever I find it.

Susan Price said…
I enjoyed this, Sandra. I love the sunsets at Oban too, and the anticipation of boarding a Callie-Mac for Mull and Iona -- and Staffa! Isn't Staffa staggering?

We recently took the little shearwater ferry from Arisaig to Eigg and Muck -- more beautiful landscapes.
20 August 2018 at 14:00