The Power of Touch: Misha Herwin

Both my parents were Poles who came to the UK after the WW2, having served in the British army. 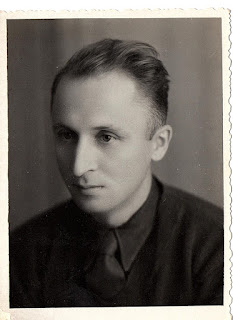 My dad had left Poland with the Polish Government when they fled the Nazis in 1939. My Mum and her family had been taken by the Russians to Kazakhstan in 1940. They had been woken at mid-night and put on cattle trucks and sent out into the steppes.

Although she had spoken about her experiences when we were children, and I had used some of them as a basis for my novel “Shadows on the Grass” we had no definitive record of her life.

A year ago my sister-in-law taped some of my mother’s reminiscences. She’d used an old Dictaphone and, afraid that the technology would not be easily accessible, I suggested that I transcribe the tapes. A little earlier one of Mum’s old work colleagues had also asked if she would talk about her life and Christine had sent me copies of the recordings she had made.
There was also a video tape that my Mum and her brother had made way back in 2008.

Armed with these resources I set to. There were hours of sitting listening, then watching and making notes. Some of the information from one source appeared to contradict another and last month Mum and I had a good session when we sorted out the anomalies. I also asked lots of questions that had been brought up by my research and learned so much more from her answers.

At one point, she go up, and pulling out a drawer brought out an old shoe-box full of documents that she had brought with her from Poland. For me the most moving one was a thin scrap of paper that her father had managed to smuggle out of the Starobielsk  concentration camp where he had been imprisoned by the Russians before being shot in the Katyn Forest. 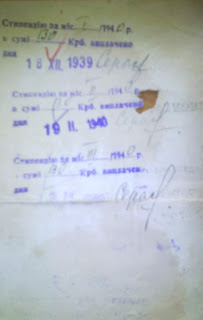 It had been written with love and kept with love. And although I had known his story for years holding this in my hand had an emotional impact I could not have imagined.

Umberto Tosi said…
What a powerful and moving account, Misha, shared generously. I look forward to reading "Shadows on the Grass," and encourage you, if you see your way clear, to make use of these precious communications from this tragic - and inspiring - past. Thank heaven you still have your Mum, surviving, and there to answer questions as well. I only wish I had asked more questions of my parents and grandparents before they passed on.
11 August 2018 at 17:40

Griselda Heppel said…
Me too. What an extraordinary story, you leave tantalising gaps that I'm guessing your book will fill. How did your mother (and grandmother?) escape from Kazakhstan? And how exactly did she and your father serve in the British Army, when first they had to get away from the Russians and the Nazis? And then that last piece of information which you drop lightly but devastatingly, that your grandfather was a victim of the Katyn massacre... argh.

Elizabeth Kay said…
My father, Feliks Krzewinski, was deported from Lwow, and did the long walk from Kazakhstan to Palestine, ending up at Monte Casino. I desperately wanted to write about his experiences, but he wouldn't talk about them, and died in 1981. However, he was an artist, and still have many of his paintings although some of them are in the Imperial War Museum. I look forward to reading your book.
15 August 2018 at 09:03