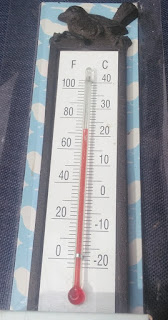 I was thinking about the weather the other day. That's something British people are famous for doing, of course, as well as for talking about it. My late father-in-law used to panic about weather extremes, especially gales, which everyone found quite harmless and even amusing until a hypnotherapist helped him to work out that it was caused by post-traumatic stress following his wartime experiences driving ammunition trucks in the desert during sandstorms.

However without even noticing it, I seem to have suddenly reached the stage in my life where I don't mind too much what the weather throws at me -- within reason, that is. I am not keen on the kind of gales we get sometimes which literally throw things at you, from trees to trampolines. I am also slightly baffled by the fact that during the various named storms we now have during every season except summer, the trains stop running somewhere in Scotland because of trampolines on the tracks.

When I was a child the weather was a much bigger deal. It could stop you playing outside, have tennis matches cancelled, and on a few glorious occasions in winter it even stopped the school bus from getting through. I particularly remember one family holiday on the island of Arran when it rained constantly for a week. We were staying in a guest house in a tiny village where the only things to do were walking, golf and boating. Everyone in the guest house was so grumpy after a few days of this that my mother, a great organiser, managed to persuade the whole group to take part in a games afternoon, with prizes for the champions. As well as carting golf clubs and the other essentials for a three week stay across from the other side of Scotland by train and ferry, we had brought a pack of cards and a couple of board games. You might almost think we had expected it to rain at least some of the time.


I can still remember the feeling of freedom when, on day 7 or 8 of our holiday, the skies cleared and we went out to forge a path through the drenched bracken down to the beach. It was almost better than having been able to do this all along.

Much more recently we've experienced extremely hot weather, even in Edinburgh, where our usual summer occurs some time in May or June and consists of two days of sunny weather followed by five or so weeks of us hoping the early morning haar (a kind of sea mist) will burn off and then the statutory three weeks of intermittent torrential downpours during the Festival. The torrential downpours started last Thursday, by the way.


I have been oddly reluctant to be inconvenienced by the high temperatures, having been content, on my days off, to find a cool place and sit or lie about in it reading instead of trying to do anything. It helps that because of a feud with the neighbours I only go into the garden when I think they're away on holiday, which has also resulted in the garden becoming a miniature rain forest, annoying them even more. It also helps that the office where I work at my day job several days a week is in the basement of the building and there's a tall grassy bank with a beech hedge on top which screens us from almost all the sunlight. This isn't great in the winter, and one of my colleagues, who is from a warmer climate, has had to get hold of a heater which is strategically positioned by her feet

One of the few times when I notice the temperature is when I get in the car, because I see it on the dashboard display as soon as I switch on the engine. Anything in minus figures indicates that there's probably ice or snow about and I'd better be careful. Anywhere between 12 and 20 degrees is fine. 25 is a bit warm. I got in one day last week and the temperature was 34*. The steering wheel was too hot to touch and I immediately opened the windows as I was afraid I would do something silly with the central locking and manage to trap myself, although I don't know if such a thing is even possible.

*I realised while I was describing the horror of this to my friend in Colorado that she wasn't particularly horrified, but fortunately I had a room thermometer to hand with both kinds of temperature on it and was able to translate it for her.

Because I had signed up for Camp NaNoWriMo in July, I was too stubborn not to write during the hottest spell, and although it was a bit more of a struggle than usual I have worked through the trickiest part of the plot, reached 50,000 words and feel as if I can make sense of it after all. So 'The Unexpected Suspect' should be completed within the next few weeks.

julia jones said…
Well done Cecelia -- and now you're sending my upstairs fo grapple with the single intractable something that just stops a novel from being quite done. Let's hear it for stubborness