I was recently sent a Q&A interview by a publisher for an upcoming anthology Into the Night Eternal: Tales of French Folk Horror, (which (shameless plug) will include my novella ‘A Small Thing for Yolanda’). As always that online interview sheet included that old chestnut ‘Which books have influenced your writing the most?’ And, as always, I was at a loss for an answer.
The books that had any effect on us at age four are never going to be the same at age fourteen, or forty-four, or sixty-four.  That said I am not sure that books read in adulthood ever affect us in the same way that they do when we are young.
I suspect what the question is designed to portray authors as astonishingly erudite by naming the latest literary success or else one of the classic worthies such as Joyce, Naipaul or Woolf.  I have read and enjoyed my share of literary classics – ancient and modern, but I suspect the books that really influenced me the most will always be those favourites of childhood. There is wonder in reading for the pure pleasure of being absorbed in something beyond our experience; when even the oldest of fairy tales were new to us.
This same ‘influential reading’ question came up in a Facebook reading group recently, and though some named worthy reads the vast majority (across the ages) named the books of Enid Blyton as their first passion. 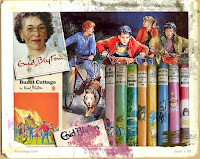 Whatever your own feelings about Blyton as an author the fact remains that she is one of those writers who possess the gift for appealing direct to her readership, despite all that the literary critics have said during her lifetime and since. BBC records show that she was kept from children’s radio for many years by BBC executives. In 1938, for example, Jean Sutcliffe, head of the BBC Schools department, wrote: "My impression of her (Blyton’s) stories is that they might do for Children's Hour but certainly not for Schools Dept. They haven't much literary value." There was a similar reaction against her books within some schools and libraries through the 1980s and into the 90s that pointed toward her middle-class values and political incorrectness as unsuitable reading for modern children. Yet of most of Blyton’s 700+ books, so far as I am aware, remain in print.
Returning to my Q&A – I know that what they really want is for me to be terribly erudite and name the latest prize-winning books or classic ‘must reads’ such as Joyce or Rushdie. But truth to say that whilst I have read a fair few literary classics – ancient and modern, I suspect the books that really influenced me the most will be from my pre-teen reading list.

If pushed I would point toward Arthur Ransome’s Swallows and Amazons as a series that has stuck with me for the longest time. Not for the four central characters, the Walker children, nor because it reflected my own upbringing in any way (far from it), but because Captain of the Amazon, Ruth ‘Captain Nancy’ Blackett who struck an indelible chord. She was one of the few truly independent young women in children’s literature of her time, and may possibly still hold that title. Captain Nancy broke rules and defied convention and never stepped back to allow the boys to take centre stage. When I consider other books that have stuck with me, both from my younger years and later, the recurring theme is invariably that of a female character who refuse to be put back into her box. Even Rowling’s Hermione Granger had to battle against expectations.
My novella ‘A Small Thing For Yolanda’ is a folk horror tale based around the unsolved murder on the metro of Laetitia Toureaux in the late 1930s. Whilst it is true that Toureaux was murdered, it is almost certain that it happened as a result of her work as a female private investigator. In my crime novel Winter Downs the lead character, Rose Courtney, set in the 1940s, takes no quarter from anyone. I think I detect a pattern developing...

Captain Nancy may have been the first and most influential inspiration on my list of fictional women, but many other came after to bolster the message. Lewis Carroll’s Alice; Jane Austen’s Elizabeth Bennett; Daphne Du Maurier eponymous Rebecca; Flora Poste, courtesy of Stella Gibbons; Sarah Paretsky’s V I Warshawski. That is not to say I don’t have male characters that have been an influence. There have been Sherlock Holmes (Conan Doyle), Lord Peter Wimsey (Dorothy L Sayers), Harry Dresden (Jim Butcher), Peter Grant (Ben Aaronovitch).
I could go on, and on, and on because there are so many books that I have read and loved over the years. How can any of us genuinely pick just one?


***
Information on Jan Edwards and her work can be found on:
Blog: https://janedwardsblog.wordpress.com/
Facebook: jan.coleborn.edwards
Twitter: @jancoledwards

Titles in print – all available in print and dig formats
As author: Winter Downs; Fables and Fabrications;  Sussex Tales;  Leinster Gardens and Other Subtleties
Jan’s award winning novel Winter Downs is first in the ‘Bunch Courtney Investigates’ series. Book two, In Her Defence, is coming soon!

Umberto Tosi said…
Congratulations on "A Small Thing for Yolanda" being picked up for that anthology. Please do plug its release so we can all read it. (Is it to be in French?). Regarding influences, with me, as you say, they have changed over time, though some stay with me. Besides the obvious classics - e.g. Joyce's Ulysses - one I've continued to cherish is Angela Carter's Nights at the Circus. Best of luck with the new release.
19 August 2018 at 04:38

Griselda Heppel said…
Yes, congratulations! And Three cheers for you for standing up for Enid Blyton. True, her style is terrible, her characters lazy stereotypes, the world of her stories about as un pc as you can imagine (though she was writing in a very different social climate)... but the stories themselves were pure genius. As you say, she knew how to speak directly to her readers and make them feel anything is possible (even if the girls are often stuck with making the lemonade and sandwiches...sigh). There is a reason why Bookshops are still crammed with Famous Five, Secret Seven and Faraway Tree.

And I’m with you on the most influential books being the ones we read in childhood. But then I write for children so I guess that figures!
19 August 2018 at 16:32

janedwards said…
Thanks Umberto. As soon as I get a release date I shall let you all know.

So true Griselda, Blyton was never the greatest writer we have ever had, but I strongly suspect that she has, to date, had the greatest influence over the greatest number of people. Blyton was the author instrumental on showing my autistic daughter what fiction meant and had my undying gratitude in showing her that books told stories, which many seem obvious to most of us but it was a breakthrough. I can see daughter now with Romeo and Juliet in one hand (for homework) and Five Go Off in a Caravan in the other (for reading pleasure).