After watching the last episode of Line of Duty, when I think I forgot to breathe much of the time, I needed something to read in bed that would let me cool down and get to sleep. In the pile of re-reads by my bed is Jill Paton-Walsh’s The Serpentine Cave. Perfect. 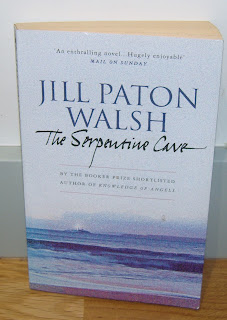 As you’d expect, it’s beautifully written and beautifully crafted, a story of a mistaken episode in childhood and a search for a missing piece of identity – and it’s set in Cornwall, which is a plus for me. My Grandmother, Little Nan (so-called to distinguish her from Big Gran, my Great-grandmother) was as Cornish as cream.  Mar’Ellen Harvey from St Just in Penwith. She was from a poor family (tin-miners?) and was born in the workhouse at Madron. She’d had pernicious anaemia as a child and had lost all her teeth to gingivitis by the time she was fourteen. She was ‘taken up’ by a couple of early property developers she worked for, and went with them when they left St Just – a scandal still talked of 70 years later by her childhood friend, Lily. She married my Sussex Grandfather, raised eight children out of eight and also cared for his six unmarried brothers until they wed and left, and his parents. Washing was boiled in a copper and the grate had to be black-leaded. I can see her now, bringing huge dishes of spuds and meat and veg from the kitchen to feed the hungry hordes when they came in from work, and I’m humbled by her strength and tenacity. I loved her. The Heligan books, stories, based on the statues of the Mud Maid and the Giant,  are partly a tribute to her memory, and whenever I’m in Cornwall or thinking or reading about Cornwall, I feel close to her. 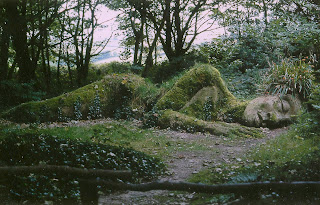 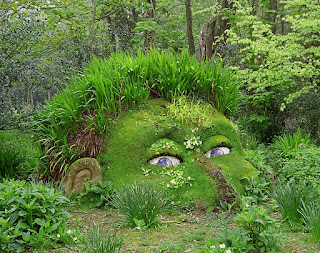 She is Granny Ellen in The Silkie, too, and although the legends of the seal-people are usually found around the coast of Scotland, the ‘islands in the West’ could as well be off Cornwall in my mind. 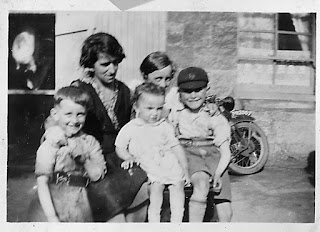 Nan with some of her children. My Mum at the back.

I’ve written stories and plays about her, trying to capture the essence of her indomitable spirit in her under-grown body, and imagining a future for her in the Suffragette movement, as a pupil teacher or librarian – fanciful stuff, I know, but her one great treat to herself was to have a book always in her pinny pocket in case she got a moment to sit and read. Those moments were few and far between, but I’m gladdened to think that she could find some solace in reading. She liked romances.
She did escape the extreme privations of her early life – food was always plentiful in the Sussex house and, although the family was never well-off, they did not want for the necessities of life. Nevertheless, she was a drudge all her life until old age and illness stopped her, and she was then cared for and cosseted by her large family until the end. I wish she had known that she was an inspiration to me, and that she is in my work in one guise or another.
This is not even remotely the blog I’d meant to write! It was going to be about a community play we saw at Restormel, but Little Nan took over. She’s done it before. She’s welcome.
Cornwall Grandmother Heligan Jill Paton Walsh The Giant The Mud Maid The Silkie

Bill Kirton said…
This has so many echoes for me, Sandra, but of a great-gran who was totally remarkable and even managed to live long enough to be a great-great-gran to my eldest. AND, she/we lived right on the Cornish border in Plymouth. Thanks for the memories.
20 May 2019 at 10:22

Griselda Heppel said…
I just happen to be spending a few glorious days in Cornwall myself, not far from Penwith. Your NaN sounds an astonishing person: what a powerful, caring, generous, resourceful and positive spirit to have achieved such a rich life after such a disadvantaged beginning. Her story would make a wonderful book in itself - Id love to see/read the plays you’ve written about her. Lovely post.
22 May 2019 at 18:40