By Cecilia Peartree - May 05, 2019
And we also have mice, despite keeping a killer cat who stalks foxes and attempts to savage dogs (more on that later) on the premises. Also, according to our next-door neighbour, a squirrel who lives in our attic, but who has left no trace of his presence there and no clue as to how he gets in and out.

The carers are a recent development and have arrived to smooth a family member's path on his return from hospital. There are upsides and downsides to this. The upside, of course, is that they carry out care tasks that I either wouldn't manage at all or that I would prefer not to have to think about doing, because as well as being totally unsuited myself to being any kind of carer, I've become aware recently that I have very little spare capacity left in my mind. In case this makes it seem as if I've gone into a senile decline, I must point out that my daughter-in-law, who is a good bit less than half my age, recently posted a graphic on Facebook saying 'I've got too many tabs open in my brain', which sums up the way I've been feeling very nicely. I think it's for much the same reasons too, as she has been project-managing some work in our house to prepare for its transformation into a one-person care home.

This leads me on to the downside of having the carers, which is that because I've never experienced their presence before, although not for want of trying to get some help from a different city council (Dundee, since you ask) in the past on behalf of my late mother, it's proving a bit hard to find space in my head for their visits which are currently running at 4 times a day. At the moment the house, which has always been a safe haven where we can do exactly what we like without worrying about other people, has turned into a place where we have to tread delicately to make sure we don't get under the carers' feet, and where I, at least, worry that they think I'm too lazy to make a sandwich for their patient although they have previously agreed that making a sandwich at lunchtime is part of the 'care package' and I only have to do the evening meal. At least on the days when I'm at work I won't have to worry about that, although I will instead be stressing out about whether they've let the cat escape. 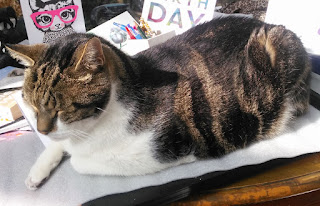 Ah yes, the cat.
We had a packed week planned for last week in the run-up to the arrival home of the patient in question. The decorator was due to finish up on Monday and the flooring company were to come in on Tuesday, the new bed and chair were delivered on Wednesday, the hospital would deliver the patient on Thursday and a new dish-washer was to arrive on Friday. So naturally the cat chose the Sunday before all this to fling himself at my sister-in-law's dog, somehow get his claw caught in the dog's extensive and complex harness and injure it quite badly, and of course expensively, although that was really the least of my worries. The vet told me she had to sedate him and super-glue the claw and toe back together. I think the glue is special veterinary glue, in case anyone is worrying about that. At the time of writing he is about to finish his antibiotics and will probably be allowed out again tomorrow. The dog was apparently uninjured, although perhaps somewhat baffled about being attacked by a whirling ball of fur only a quarter his size.

Anyway, returning briefly to the carers, I began to think about the kind of life they must lead. They have four days at work and four days off, but during their working days they make four calls to our house, sometimes only an hour or two apart, anytime from eight in the morning until nine at night. Multiply that by a number of patients with varying needs and temperaments and awkward families who may resent their presence, and whatever they are paid is not enough. I certainly wouldn't do it for a million pounds!
carers cats decorators