Getting Away (Cecilia Peartree)

By Cecilia Peartree - June 05, 2019
I don't think I've ever needed a break so desperately. Even at the last moment it seemed as if there were forces at work trying to stop me from escaping. I had just finished packing that morning when one of the kitchen lights suddenly began flickering on and off rather dramatically, even after I used the nearest switch to turn it off. Of course it could have been caused by an alien invasion, as in the scene from 'Close Encounters' where the little boy sees all his toys start to work on their own, but I suppose that was always an unlikely hypothesis.

When I tried again with the other switch, at the far end of the kitchen, it gave me an electric shock. While still waiting for the taxi, I sent an online message to an electrician begging him to hurry round and do something about it, ran upstairs to tell the bed-ridden member of the family to drag himself downstairs and out the door if he smelt burning -- leaving the door open for the cat, naturally -- and a few moments later left, still in a panic, to catch my train.

Fortunately I had charged up my mobile phone for the journey, because the electrician phoned me while I was on the train at Waverley Station to say he would come round to the house right away, and thanks to the invasion of the carers which I've already mentioned we have a key-safe at our front door, so I was able to give him the code for it and he could get in and fix the fault.

Well, I could have done without that kind of start to my week away, but once I relaxed, which didn't take quite as long as it probably should have done, thanks to the pressing need to choose between a cooked breakfast and a yogurt on the train, and the always soothing sight of the North Sea coastline outside the windows, I got into the holiday spirit quickly enough.

This was partly the research trip I had been wanting to do for a while, and partly a work visit to London for a conference at which I had agreed to speak. I couldn't quite fit in the north coast of France within the time I had allowed. Instead I had two nights in Rye, in Sussex, during which I planned to see for myself some of the places I had been writing about, working from maps both online and in print, and from a book of walks. Incidentally, the book of walks made everything seem much too easy. But more on that in a minute. 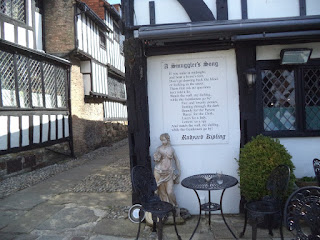 For a start, I stayed at the Mermaid Inn, in Rye, an old smugglers' haunt and full of atmosphere, although I was somewhat disappointed to find that the corner cupboard in my bedroom, which looked as if it must have a secret staircase concealed in it, was just for storing clothes.  In fact the whole town was full of atmosphere and cobbled streets. These weren't ideal for walking on, but I had pre-empted some of the problems by taking two sticks with me. I've usually taken two sticks on holiday with me ever since crashing down on the ground at Centre Parcs and doing something to my knee. I can't really afford to wreck any more joints these days! 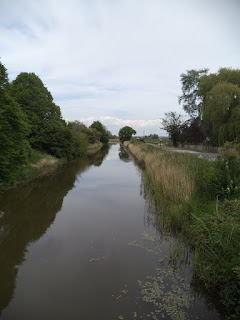 I was also glad of the two sticks when investigating the Royal Military Canal, which features in my novel. This was a case where the maps and the book of walks didn't tell the full story. For instance, the footpath which I had assumed was a towpath running alongside the canal on the flat turned out to be a rambling path leading up hill and down dale behind the parapet that had been constructed along one side of the canal for defensive purposes. I am not sure it would ever have been suitable for horses, which was useful to know. I also learned something useful from the taxi driver who drove me to Appledore and back - fortunately I had done enough preliminary research to know that the station there is 2 miles from the town, and that there is virtually no bus service, which came as a bit of a shock to me as a city-dweller. According to the taxi-driver, the bends in the military road that runs mostly parallel to the canal were planned to be at intervals corresponding to the range of a rifle shot. I'm sure I can shoe-horn this into the novel somewhere!

Although I didn't walk very far in Appledore, and my walking was interspersed with two visits to Miss Mollett's High Class Tea-Rooms, I was pleased to have seen the lie of the land for myself, and I considered my research trip well worthwhile. 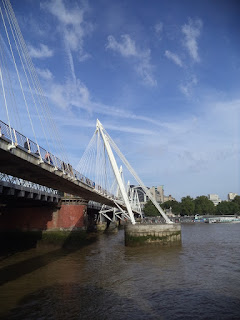 I didn't want to leave Rye and go to London, and indeed when I got off the train at St Pancras and emerged into the polluted air around Euston Road, I felt like just returning to Sussex, but the conference was at a venue on the South Bank, and arriving there in the mornings was a real pleasure. 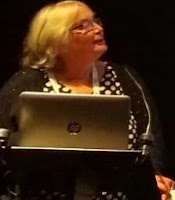 Here I am in full flow during my presentation. I must say this is one of the better pictures of me that I've seen lately! The short holiday had evidently done me good.
conferences electricity holidays London research Sussex