This may be my last AE post | Dipika Mukherjee 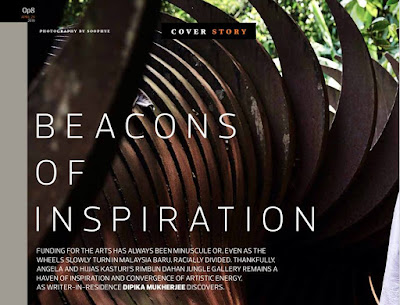 I will be writing a fortnightly column for The Edge, Malaysia, from July 2019 is onwards. Loosely structured as literary postcards from everywhere, this opportunity will allow me to address my readers in a country I write about most frequently, and I couldn't be more thrilled.

The Edge published two of my articles earlier this year, including one about a residency at Rimbun Dahan which became a cover story. So I have tested the waters ... and it feels warm and welcoming! This is a Malaysian newspaper that I have a lot of respect for as it stood up to government bullying during a politically fraught time; it is the newspaper that appeared with a black cover page to protest censorship, and features in my short story, Doppelgänger, in 2015. 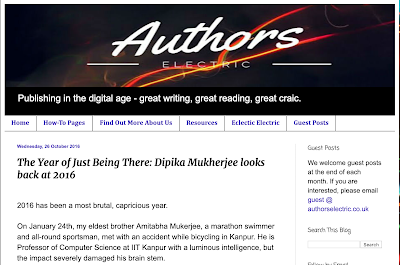 I have been writing for Authors Electric since October 2016... almost three years! I was invited to join by Umberto Tosi, and my first article was about my brother's accident. This post felt cathartic and vulnerable in a way I hadn't felt with my fiction or poetry. I would go on to write more posts about my brother, his books, as well as our mutual love for everything literary.

When I had no energy to speak and the world seemed endlessly bleak, writing seemed my only control over a wanton universe.

I would read other writers on Authors Electric write about caring for loved ones, or about bereavement, and learn about healing through words. I would read about successes and failures, the rants and the jubilation...always in crafted sentences which were a joy to read. More than anything else, this group gave me a safe space where I tried out a form of literary ventriloquism, throwing my voice further and further, bouncing off so many others, and watching it echo right back.

An article on how slogans during the Women's March in Chicago were literary micro stories was widely shared, as was the post about a small literary festival in Malaysia winning accolades around the world. My post on misogyny in Bengali children's rhymes was reprinted in the Indian media. I wrote about Malaysia and India and Myanmar and Brazil and Wales and the Netherlands and the US ... I wrote the world as I read it through books and sometimes stray poetry.

Always -- always-- I wrote with the conviction that my core group of readers at Authors Electric would treat my words with respect, and even compassion. I could be sure of this, and it was SO liberating, to write whatever I wanted.

Writing for the news media is a different beast, and with the pay, comes the pressure of delivering something that consumers find worthy of purchase. 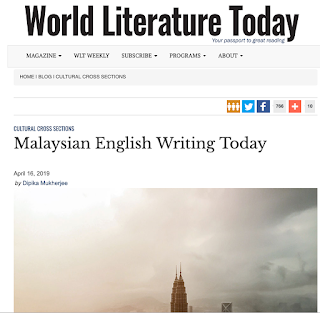 I am grateful to the Authors Electric group for helping me find and develop a voice in the lyrical essay. My last two essays published in The Edge were republished by World Literature Today, and I am excited about this new global audience. I am not a fast writer, so I am unlikely to be able to sustain a fortnightly column at The Edge as well as a monthly Authors Electric post along with my two books-in-progress and teaching, so as soon as I find a substitute writer to take over this spot, I'll take a bow.

But I'll always come back, with a Guest Blog or two, if you can still make space for me.

Dipika Mukherjee’s work, focusing on the politics of modern Asian societies, includes the novels Shambala Junction (which won the UK Virginia Prize for Fiction), and Ode to Broken Things (longlisted for the Man Asia Literary Prize as Thunder Demons). She has been mentoring Southeast Asian writers for over two decades and has edited five anthologies of Southeast Asian fiction. She is Contributing Editor for Jaggery and frequently writes for World Literature Today, Asia Literary Review and Chicago Quarterly Review as well as for the media in Malaysia and India. She is core faculty at StoryStudio Chicago, teaches for the Graham School at University of Chicago, and is affiliated to the Buffet Institute for Global Affairs at Northwestern University.  More at dipikamukherjee.com