I really do try to act like a grown-up, and mostly seem to get away with it. There is, however, the occasional blip, usually when, clicking on Facebook or some equally inexcusable online site, I’m attracted by some technical or technological item which promises me miraculous solutions to various problems – medical, writing or computing-related, gardening, household gimmickry, etc. – and, cavalier that I am, I tell Paypal to send them some money so that I can own it/them. The generosity of Paypal is unbounded and, some days later, whatever I’ve ordered is delivered by a variety of very friendly postpersons.

The subsequent experiences with these objects, processes, machines, garments, pieces of equipment, etc. range from frustration, bewilderment, anger and, occasionally, deep satisfaction to internal dialogues about how seriously I really take the existentialists’ assertions about the essence of my ‘moi’.

The absurdity of the whole process was brought home very forcibly last month when I spent a week in Orkney. I was there giving writing workshops to students and loved the friendliness, gentleness (and accents) of the people. It really is a beautiful place.

When I got home, however, there waiting for me on my desk was a little package. I unwrapped it and, inside, found a small box, some 5 x 2 x 2 inches,  which contained a thing made of black plastic. I remembered having ordered something several days before leaving  for Orkney, but I couldn’t remember what it was. (See above re. ‘acting like a grown-up’.) 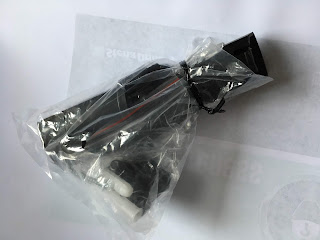 Never mind, there was also a small piece of paper on which were what must be the ‘operating instructions’. (I say ‘must be’ because there was no actual heading. The thing’s ‘essence’ consisted of a lower-case letter, a hyphen, and two numbers.) Unfortunately, the ‘instructions’ – if that’s what they were – were in a font size that must be 0.02. On top of that, the characters were all Chinese. Luckily (or not), on the reverse of the paper, they’d been translated into equally tiny English.

Now, before we continue and you start imputing me with racist or imperialist tendencies, I must tell you I have the utmost respect for translators. Mainly because once, during one long ago summer vacation,  I was the only one in the French department of the university where I worked when a person arrived looking for someone to translate into French the instructions for an asthma inhaler. They had no option but to ask me. I did the job and then spent months scanning the French press expecting to find reports on increased mortality rates among French asthmatics.

Anyway, the bits of tiny English I could decipher were about as literate and comprehensible as a Trump tweet, but I still have the piece of black plastic and the illegible instructions for its use, and one day, in the near or distant future, I’ll find out what it is. There are definitely more things in heaven and earth, Horatio, than are dreamt of in thy philosophy.

Thank you for making me smile, Bill - and good luck with whateveritis! There was an incomprehensible lump of wood with a slot in the middle and leather straps each side on the telly earlier. it turned out to be a wooden leg for a sheep. That's what the man with the beard said and he looked like an expert.

Now there's the start of a short story - or a mystery novel! I'm sympathize, but I'm also glad I'm not the only compulsive "special online offer" shopper of gadgets in this esteemed group. Thanks for the chuckles, Bill. I have to go check my mail now and see what packages have come in.

This kind of post is what the internet is FOR. I have made my family cluster round my laptop so we can all giggle together. My son's first thought was that it's a rainsword with a samurai handle (I SO wish it is that) but on closer examination he noticed it has a bracket, and suggested some kind of wall mounting for a TV.
And I love the sheep's wooden leg, Sandra! Thank you all for much hilarity.

Sandra, it would need to be a miniscule sheep, but if an expert with a beard says it is…

Umberto, how reassuring to hear that my idiosyncrasy is shared by someone of stature. May all your packages be comprehensible.

Griselda, Like you, I’d have been so proud if it had turned out to be ‘a rainsword with a samurai handle’, but no. In fact, while it may have a bracket (I cede to your son), it’s too flimsy to support even an iphone and it turned out to be a video camera (which may be an approximation to its real essence but it’s the best I can do).