By Debbie Bennett - October 06, 2019
There are, apparently, a maximum of only six degrees of separation between anyone on the planet and Kevin Bacon – he of the irritating EE adverts: who says you can’t? Me, Kevin. I say you can’t. I say it’s enough to put anyone off EE, though the reception in our village is beyond awful anyway. 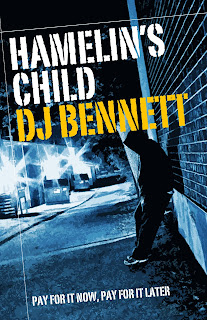 Umberto Tosi said…
Hamelin's Child sounds fascinating. I'm looking forward to reading it. I'm with you on the endless rewriting, reading aloud and rewriting! I don't know my Kevin Bacon Number, but I did work for Francis Coppola for a while back in the 1970s, and I think Bacon was in one of Francis' films, but I can't recall with one... So maybe my number is #1, or would that be #2. I can't get the system straight. Anyway, who you know - celebrities or otherwise - is overrated. It's the work that matters. But you already know that.
6 October 2019 at 07:03

Jan Needle said…
Talking of name-dropping and the Jimmy reference Debbie, I think you may have mentioned more germanely that I've written a novella about Napoleon (which is also available in German which must prove something, God knows what), and that according to my dear departed mum I actually looked like him as a baby. I also spend a fair amount of time in St Helen's, where another mate, Andy Lynch, lives, and even more telling for your pitch, I've been drunk in in Hollywood several times, although to be fair it was Hollywood Co Down, not in the South Atlantic. Keep on pitching though - Hamelin's Child is excellent, and persistence is probably the key, coupled with luck. Having just read this comment - I'll get me coat!
6 October 2019 at 10:43

Debbie Bennett said…
The only thing I've been in Hollywood - well LA anyway, although it *was* a tour of the Hollywood stars' houses - is very ill. It probably looked like very drunk as I was so dizzy I couldn't stand up, and I got ejected from the tour bus God-knows-where to throw up in a small cafe and get a very expensive cab back to the hotel .... Turned out to be a virus that ate my inner ear.
6 October 2019 at 10:48