Corona Island picks for a Cancelled Summer by @AuthorKatherine

By Katherine Roberts - March 21, 2020
The covid19 scare is affecting even normally socially-isolated authors like me. Activities essential for our mental health and wellbeing, such as meeting other socially-isolated authors for coffee in a halfway cafe (often tens of miles away) are now almost impossible... either the cafe itself has closed, or the other authors are too afraid to venture out. Both of my local National Trust properties, which provide valuable respite from all the wireless radiation in town, as well as being a source of creative inspiration, have also closed for an indefinite period - possibly all summer - and further flung NT places that are kindly keeping their parks open for free during the crisis (but not their cafes, sadly!) are too far for me to reach on my bicycle without planning an overnight stay, which is now difficult because most hotels and B&Bs are shut. Pretty much all of my summer activities have been cancelled, including an authors' conference in rural Oxfordshire I always look forward to, which is both a valuable networking event, as well as a chance to catch up with far flung author friends. Schools and colleges are now closed, too, sweeping away a valuable source of income for children's authors in the form of school visits, and also bringing to an abrupt end my Royal Literary Fund Fellowship that provides 1-1 writing support to students a university that (ironically) trains new nurses and other healthcare staff. I really feel for the students I've seen, who are heading home early in confusion and worry, and I've read enough Occupational Therapy essays to know that at least part of the value of such activities for an otherwise isolated author is the feeling of usefulness and purpose they bring... without which we are simply a string of crazy words in our heads, and one editorial decision away from starving in our garrets when "the computer says no" (the 21st century version of "sorry, not for us I'm afraid.")

So how does all this make me feel? Rather pointless and trapped at present, to be honest. The horrible uncertain thing is that we are only at the start of what is promising to be a desperately stressful and miserable summer for many people, let alone those who already feel isolated enough at the best of times. So if, like me, you feel a need to turn off the mainstream news for a while and block social media for the sake of your sanity, here are my Corona Island picks for weathering the pandemic: 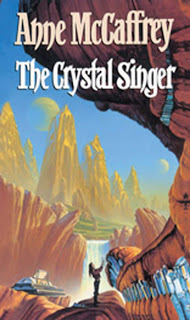 The Crystal Singer by Anne McCaffrey.

This would probably be classed as YA (young adult) if published today, but was written for the adult fantasy/SF genre. Killashandra Ree, upon learning she has failed her final music exam to be a top class singer, is contemplating throwing herself under a space shuttle when she meets charismatic 'crystal singer' Carrick, who suggests her talents would be welcome on his planet of Ballybran, where people like her with perfect pitch "cut" valuable crystal from the ranges. What he doesn't tell her is that, in order to live and work on Ballybran, she'll need to survive something similar to a deadly virus... I won't tell you what, but there are obvious parallels. This is not a disaster novel, however - far from it! McCaffrey's characters are human and real, the story is gripping as well as having an interesting scientific concept behind it, and there are two more books in the series so if you enjoy this one you'll get to meet Killashandra again!

I guess most people have seen the Mission Impossible films starring Tom Cruise as Ethan Hunt, so I'm not going to tell you very much other than that this one is about a genetically-engineered virus called Chimera, which is in danger of falling into the hands of a terrorist organisation, and its antidote Bellerophon (named after the Greek hero who slew the mythical chimera). The line that sticks in my mind comes shortly after the heroine Nyah Nordoff-Hall (played by Thandie Newton) injects herself with the final syringe of deadly virus: “You're not gonna shoot me Sean, not this bitch, cause she's worth THIRTY SEVEN MILLION POUNDS.” And this film was made 20 years ago, so you can add inflation on to that.

A busker was singing this in my local town yesterday, which seemed appropriate given the general mood of the people I bumped into - at appropriate social distance, obviously - on my (so far unsuccessful) hunt for replacement toilet rolls. I plan to sing it as I pray the sewer doesn't clog up when my single remaining loo roll runs out and I am forced to use pages from my remaindered Song Quests instead... which is too much information, I know, so I'll shut up now.

Over to you: What are your Corona Island picks for the summer of 2020? Let's make a list!

Griselda Heppel said…
Well I think lots of people have been suggesting Camus's The Plague and Defoe's Journal of the Plague Year... Perhaps one could add to that Pepys's diary for 1665 and the Bergman film the Seventh Seal, along with the chapters in Exodus that deal with the 10 (or was it 12?) plagues of Egypt. It's being so cheerful as'll keep us all going, I reckon.
Sorry to hear your life has become more circumscribed. At least while we can still get out for walks/cycle rides, and hopefully the weather gets warmer, there are still pleasures to be had. But lonely ones.
21 March 2020 at 16:53

Katherine Roberts said…
Thanks, Griselda! I also thought of the Biblical plagues of Egypt, also the four Horsemen of the Apocalypse... however, no Jehovah's Witnesses have knocked on my door lately to explain it all to me :-)
23 March 2020 at 12:30

Helen Larder said…
Thanks very much for this post, Katherine. I've been recommending the film, 'Captain Fantastic', which is new on Netflix. It's about a family living 'off the grid', isolated from society. It is also about a particular mental health condition. It is very well written and brilliantly acted, with clever humour throughout. Fast forward the first scene if you are of a very sensitive disposition! xxxx
29 March 2020 at 19:13