How "The Awesome Adventures of Poppy and Amelia" came to be written: Misha Herwin 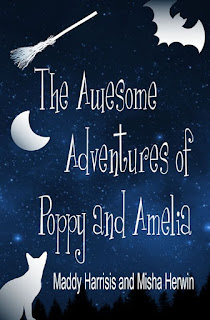 “The Awesome Adventures of Poppy and Amelia” would never have happened if it hadn’t been for lockdown.

In those first couple of months, like so many writers, I found working on my current book very slow going.  A day’s work felt like ploughing through porridge. Very little got done and what I did write had somehow lost its flow.

The impetus to write had also faded and most days I found it almost impossible to get going. Nothing much seemed to matter. While other people re-decorated, caught up with DIY or re-modelled their gardens I let the time slip past.

Except for my four times a week Skype lessons with granddaughter Maddy.

At the start of lockdown all grandparents had been roped in to help with home schooling and my brief was to deliver her English lessons. Having been a teacher in a middle school as well as in secondary education, this wasn’t going to be too hard. Or so I thought.

Working through what the school had sent, however, was far from simple. No blame here to the teachers who had to put together a term’s worth of work almost overnight. Some of the material was great, some less than inspiring and some beyond awful. There was also the unrealistic expectation that given a stimulus the pupil would then find a quiet space and write for twenty minutes. Hard to achieve in a classroom let alone a house, flat or even a bedsit with parents and siblings vying for space.

In the event, we managed and the reward at the end of each lesson was story time. Together Maddy and I wove the story of two girls who became witches by accident and how they learned to use their growing skills. Added to the mix was Mia who like Poppy and Amelia had a secret of her own. 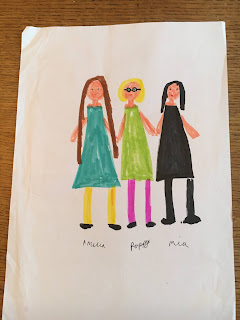 The characters evolved with the telling. Maddy knew exactly what everyone looked like and sent me a picture to make sure we got their descriptions right.

To keep up with their adventures I had to make notes on each story and towards the end of lockdown I had at least 5,000 words of notes. At which point I suggested to Maddy that we could make an ebook to which she replied, “No Granny, I want a proper book, with my picture on the back.”

And so began our joint editorial sessions. We cut down on the stories, we honed what had been written, Maddy put me right on things I had either forgotten, or got wrong and then when the book was well on its way, I took it to Renegade Writers.

My fellow Rens loved it. At our weekly on line meetings Michelle said it was like being back at primary school and having story time on the mat. Much as they enjoyed it, they didn’t spare me the feedback. Because the book had evolved from storytelling there were gaps in the narrative that needed to be filled. At the end of every session I had to do some re-writing then check with Maddy to see if she agreed with what I had done.

Finally it was ready for Jan Edward’s, my editor, scrutiny, followed inevitably by more work and then there really wasn’t anymore to be done.

Maddy had specified what she wanted on the cover, which was designed by Peter Coleborn and exceeds all our expectations.

12th November is publication day, two days later it’s Maddy’s birthday.  In any other year we’d be there for a family party, but in any other year there would have been no “The Awesome Adventures of Poppy and Amelia.”

As always the book is available on Amazon, Kindle HERE and all other digital outlets. You can also order it from any bookshop.

Katherine Roberts said…
What a wonderful thing to do during lockdown, Misha! Love the cover, too.
11 November 2020 at 13:33

Peter Leyland said…
That’s just lovely Misha. I taught my grandson Science during lockdown, not nearly so creative and constantly interrupted by Lego! Your account does remind me of my middle school teaching days, however, when anything seemed possible. Good luck with the book.
11 November 2020 at 16:27

Griselda Heppel said…
I LOVE the look of this book. What a super thing to emerge from lockdown, just when everything else in your writing life grinds to a halt, your granddaughter inspires this brilliant co work. I trust her picture really is on the back!
12 November 2020 at 18:58