Illustrations - or not - in Adult Fiction -- Bronwen Griffiths

I was stuck for a topic for this month’s blog until I read Griselda Heppel’s article on woodcuts (published 1st November). Her blog reminded me of how important illustrations were for me as a young reader – for all young readers I imagine. Even now, I adore illustrated books. A few years ago I purchased a book called Waterlife, which is purely illustrations. It’s a treasured possession. 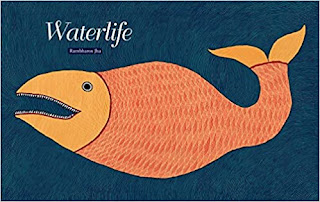 Few novels, besides specifically graphic novels (which have become quite popular) are illustrated. 19th century novels often contained illustrations but that has gone out of fashion. Now, only a handful of fiction books for adults have illustrations. Mervyn Peake’s Gormenghast trilogy contains a small number. The Hobbit includes illustrations but Tolkien had trouble persuading his publisher to include his drawing of the The Book of Mazarbul in his Lord of the Rings trilogy. In fact it was not included in the first edition. The Silmarillion was illustrated but Tolkein did not live to see it in print. But these books are exceptions. It is rare to find any illustrations in adult fiction

One rare exception is the set of three illustrations by Willow Dawson in Miriam Toews book, Women Talking. We discover that the illustrations are a voting ballot: a group of illiterate Mennonite women will cast their vote to decide how to respond to the crimes perpetrated against them.

Non-fiction books are more likely to include photographs or drawings. The Raqqa Diaries: Escape from the Islamic State by Samer (not his real name) is chock full of illustrations by Scott Coello. Travel books often contain photographs and maps, although I was very disappointed NOT to find a map of Venice in Cees Nooteboom’s marvellous, and recent book, on the city. 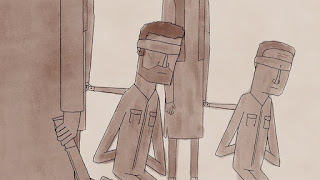 No, I must to return to children’s books to discover illustrations. One of my favourite artists is Edward Ardizzone who illustrated many children’s books, including Stig of the Dump by Clive King. I can also never get enough of Tove Jansson’s stories and illustrations for the Moomin books – I even have a Moomin calendar on my wall though whether I want to be reminded of 2020 again is another matter. 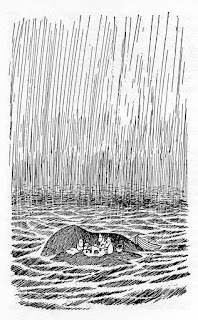 As a child I loved the illustrations in My Book of Favourite Fairy Tales (1921). Little is known about the illustrator, Jennie Harbour, despite the fact that her works are now collector’s items. She was born in 1892, probably in London, and is considered to be part of the Art Deco movement. Copies of the book now sell for £100 and more but my own copy is worthless (not to me!) as I decided to ‘improve’ some of the black and white illustrations when I was around five years old and coloured them in with crayon! 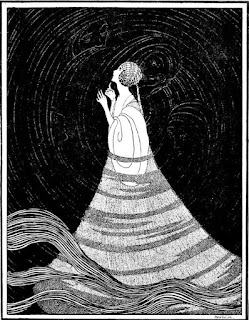 The illustrations to Mary Norton’s series, The Borrowers, are by Diana Stanley. These are also wonderful drawings. A more recent book, published in 2008 by Walker Books, is The Ghost’s Child by Sonya Hartnett. The illustrations by Jon McNaught often wrap around the text. 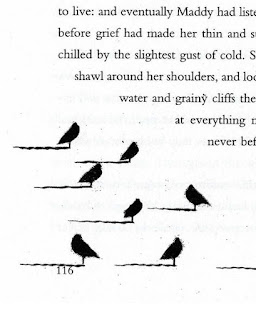 There are many amazing children’s picture books, some of which I enjoyed reading to my son when he was small but as to whether we will ever see illustrations again in adult fiction, remains to be seen. With the exception of graphic novels, that is.

Bronwen is attempting to work on a novella but during lockdown the work is progressing slowly and she is spending more time drawing topiary instead. She is the author of two published novels and two collections of flash fiction

Her stories can be read online at

Griselda Heppel said…
Thank you for this wonderful post reminding us how important illustrations are (and mentioning my AE post about wood-engravings, thanks too for that!).

It is sad that the tradition of illustrating adult books has ceased - just think of all the famous people who have illustrated Dickens's works, beginning with Phiz. This is where the Folio Society has done such a brilliant job down the years, publishing beautiful editions of the classics with specially commissioned illustrations by artists like Edward Bawden, Elizabeth Frink, Charles Keeping, John Lawrence, Simon Brett, Miriam McGregor and many others. I'm glad you've found some recent examples of illustrated adult books, while your evocation of Ardizzone, Tolkien, Peake and perhaps my favourite, Tove Jansson, brought back so many happy reading memories.
12 November 2020 at 18:50

Peter Leyland said…
Very interesting Bronwen. Made me look back at my remaining illustrated children’s books like The Coral Island and Tanglewood Tales. I did have The Otterbury Incident illustrated by Edward Ardizzone but my daughter insists it’s hers. What I do like is when illustrations take on a life of their own like Sidney Paget’s drawings of Holmes. I always delight in telling people that he never actually wore a deerstalker or smoked a curved pipe. Thanks for an entertaining read.
12 November 2020 at 19:35

Ann Turnbull said…
Oh, yes! Winne the Pooh... The Lion, the Witch and the Wardrobe... I also loved the illustrations to The Just So Stories by Rudyard Kipling. And recently I've been reading poems by Imtiaz Dharker, illustrated with her own subtle and mysterious artwork.
14 November 2020 at 14:21

Peter Leyland said…
Illustrated Poems, yes. I have Imtiaz Dharker's Over the Moon full of wonderful drawings to accompany the poems, and have seen some of Bronwen's poems on Twitter which she illustrates herself.
14 November 2020 at 15:51