My main method of escape from the doom-laden statistics and fear-mongering on the news these days is to disappear into the pages of a good book, preferably backwards in time. 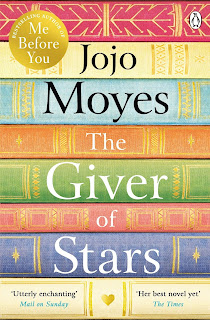 Jojo Moyes' Giver of Stars is one of those books that 'came' to me, sitting on top of a small pile of secondhand donations outside the tea hut in my local park, where they are raising funds for restoring the tea house ready for a grand opening once this covid pan(dem)ic is over. I dropped a few coins into the collection tin and grabbed the book straight away, because I have read this author before and know she always delivers an intelligent and emotionally engaging story that I will probably enjoy. I didn't even know what this one was about until I started to read and realised it contained HORSES, one of my lifelong passions, and also BOOKS, which are another. The story is a romance of sorts, actually several intertwined romances, set against the backdrop of 1930s Kentucky, when intrepid women rode out to remote farmsteads carrying library books and became known as packhorse librarians.

What a brilliant job!!! Combining libraries, books, horses and the freedom of the trail, all rolled into one... shame I was born half a century too late, and on the wrong side of the Atlantic. Wales is the closest I came to my dream this year.

Fresh back from my own trail ride, although carrying just one book (a slim volume of short stories by Michael Moorcock I'd picked up in Hay the day before), I immediately identified with the straight-talking Margery O'Hare who rides her mule Charley, laden with books, for miles through the forest and over the old Indian escarpments on a mission to bring stories, recipes and education to the isolated and suspicious families who live in the hills. She is joined on the project by English newly-wed Alice, Izzy the lame daughter of the local library organiser, and a coloured woman called Sophia with librarian qualifications, who works tirelessly behind the scenes to keep the shelves in order while the others are out riding the trails (this was during the years when coloured people had separate libraries and just about separate everything else in America).

As with all of Jojo Moyes' books, there is more to the story than romance. Not everyone thinks the library is a good idea, particularly when the women use their position to alert the land owners to the dangers of allowing the local mining company access to their land. The powerful men in charge do not like the fact rural families are reading books and leaflets and becoming wise to their rights, and the women must soon find a way to defend themselves.

If you are not a horsey kind of book lover, don't worry, because Moyes doesn't always write about horses. Her best known novel is probably Me Before You, which was made into a movie starring Sam Claflin and Emilia Clarke (who also plays Danaerys Targaryen in Game of Thrones), and was followed by After You and Still Me... two more books of hers I managed to read this summer. That trilogy deals with the issue of assisted dying, apparently one of the permitted exemptions that allows you to fly to Switzerland during lockdown in the middle of a pandemic, which brings me back to the 21st century.

Damn. That dratted virus still seems to be around, so clearly we need another escape plan.

If you could choose any time period, what would be YOUR dream job, and where?

Katherine Roberts writes fantasy and historical fiction with a dose of magic for young readers. Find out more at www.katherineroberts.co.uk

Katherine Roberts said…
Nobody has a fantasy dream job? Maybe you're all living the dream already! Feel free to comment about your current job, if so...
22 November 2020 at 13:56

Umberto Tosi said…
I would have enjoyed being editor of the Territorial Enterprise in Virginia City, Nevada during the 1860s silver mining boomtown Comstock Lode days when Mark Twain - then Samuel Clemens - wrote for them, among other stalwarts. With its saloons, theaters, Victorian opera house schemers, sagebrush poets, and sudden tycoons it combined the wild West with Shangri La...

I've had many at different times in my life, from assassin to photojournalist to professional gymnast, and finally to the job I've always wanted since I was sixteen - author. It took me all my 20s and two decades in finance before I took it up seriously, so I guess I ended up with my dream job, after all!

Katherine Roberts said…
That one sounds fun, Umberto! 1860s? No problem. Just one moment while I set up the time machine... and off you go!

Assassin was definitely a fantasy one, and now that I think of it, it's one I've used in my stories.

Perhaps that's what writing offers more than any other job,
- the chance to live the fantasy life through our characters. :D
23 November 2020 at 13:24