Recently, I was having an online argument with someone about the BBC. She wanted to abolish it. I pointed out that it didn’t just put out TV and radio programmes, but for a few measly quid a week there was Cardiff Singer of the Year, Young Musician of the Year, the link with Open University, the emerging artistes programme for singers and musicians, support for choirs, orchestras, and also such public amenities as weather reports, the shipping forecast, education packages for schools…etc. etc. ‘People don’t want that,’ she retorted. Really?

Then recently a sound engineer was explaining the difficulty she was in during the covid crisis. She is self-employed, so did qualify for the government’s belated financial help, which included those in the creative industries, who were unable to work at present. Ah, but then she was offered a contract for a theatre job, so effectively stopped being self-employed for the duration. But she had a job anyway, right? Wrong! Theatres were closed. She, and no doubt many others like her, were left in limbo. Do we as a nation just not get it? The creative arts are not just an add-on after the bread-and-butter aspects of our days, but the very lifeblood of a civilised society. Of course, most of us love what we do – that’s no reason to think we shouldn’t be nurtured and respected and rewarded for our contributions to wellbeing and joy and the general good of the nation.

In the midst of my angst/muttering/cursing at the Philistinism that seems to have overtaken us, I suddenly thought of our trip to Prague some years ago, when city breaks seemed such an easy and innocent thing to do. It’s a beautiful city with a most amazing roofscape. Here’s Our Lady of Tyn (which I first thought was ‘tin’ and imagined the church made of it). 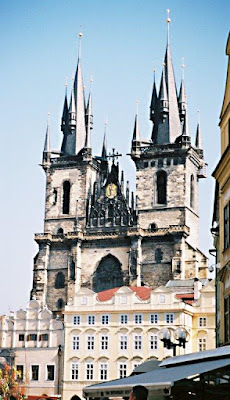 There were almost more concerts than can be taken in during a day – short programmes in any old hall with space for some chairs, at coffee time, after lunch, teatime – music so rudely called ‘lollipops’ by some (ie lovely stuff that hordes of people enjoy)  - played wonderfully by formally-attired musicians we thought might be moonlighters from the opera house. It was a memorable trip and one of the best things about it was a visit to Vyšehrad, the old cemetery, where the beloved sons and daughters of the country are laid to rest. Dvořák is there under a suitably vast and impressive (and unsuitably hideous) monument; Smetana has a tasteful obelisk; Purkinje, Karel Čapek …the list is long and very impressive. 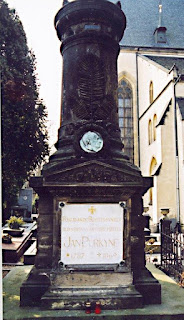 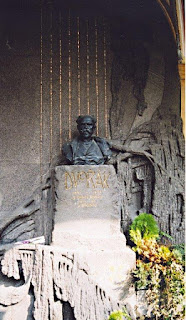 There are no soldiers there (and a very few carefully-selected politicians), only people who made, in their lifetimes, lasting contributions to the nation and the world: composers, singers, writers, poets, painters, sculptors, actors, scientists, doctors, teachers, musicians. In other words, the truly important people, as Arthur O’Shaughnessy knew well:

We are the music makers,
And we are the dreamers of dreams,
Wandering by lone sea-breakers,
And sitting by desolate streams; —
World-losers and world-forsakers,
On whom the pale moon gleams:
Yet we are the movers and shakers
Of the world for ever, it seems.

With wonderful deathless ditties
We build up the world’s great cities,
And out of a fabulous story
We fashion an empire’s glory:
One man with a dream, at pleasure,
Shall go forth and conquer a crown;
And three with a new song’s measure
Can trample a kingdom down.

We, in the ages lying,
In the buried past of the earth,
Built Nineveh with our sighing,
And Babel itself in our mirth;
And o’erthrew them with prophesying
To the old of the new world’s worth;
For each age is a dream that is dying,
Or one that is coming to birth.

These are the first three verses of a much longer poem, but enough, I hope, for all you wonderful creative people to take heart and hold your heads high - even if you can’t pay the rent.

All photographs by Niall Horn

Peter Leyland said…
A great paen to creative people Sandra. In July 2017 I read and wrote a paper about 'Creative Health: The Arts for Health and Wellbeing' which your piece reminded me of. It was a 200 page parliamentary report headed by people like Grayson Perry et al but I am still waiting for it to have an impact. As you say the creative arts are the very lifeblood of a civlised society. We must support and be part of this. Thankyou.
20 November 2020 at 12:44

Bill Kirton said…
Spot on as ever, Sandra. I despair that our current principles, practices and preoccupations all seem to deny the existence of that fragile truth both you and Peter identify as a 'civilised' society.
20 November 2020 at 13:26

Umberto Tosi said…
Thanks for reminding us of the truest and most-neglected measures of wealth and civilization - celebrated at least in Prague.
20 November 2020 at 20:13

Without the arts and support for the institutions that create and deliver them to the masses, we would undergo a slow starvation.

This is evident in our behaviour right now. We yearn for something that takes us out of reality, if only for a short time - a book, a concert, a movie, a visit to the gallery ...

If you want an example of the absence of art and culture and what it does to a 'civilised' society, just look at the last 4 years under the outgoing US president. With no interest in art unless he turned a profit and monetary wealth the only marker of success, he has bled his country dry.

It will be the creatives who offer the balm to heal those who've lost so much.