Not many people get beyond this gate. But go on, you can come in.
Have a seat by the pond. There is water down there, somewhere, below the poppies. The birds and insects find it. 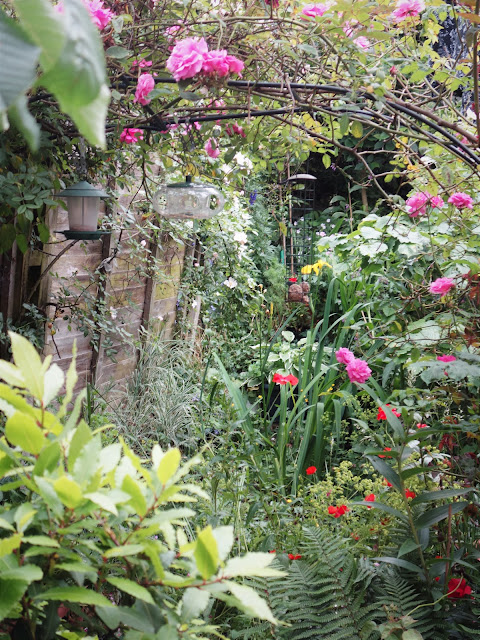 This fox-glove (below) self-seeded and started off quite modestly. 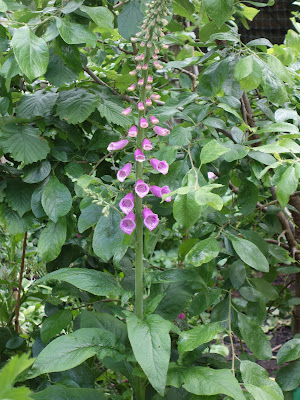 Then it grew and grew and kept on growing, into a mighty tower of flower. It must like its position, on the shady side of the potted plum tree, because it's now two and half metres tall (eight feet). 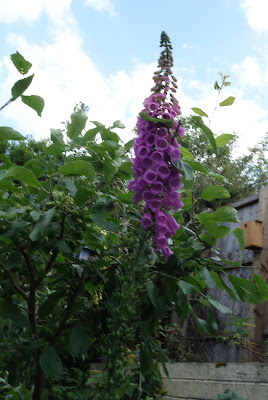 It has been a great amusement to stand and watch the bumblebees work their way up this tower. They arrive in twos and threes and go from one flower to another. They vanish inside, but if you stoop and peer into the flower yourself, you see them working their way right to the back, with little scrambling legs. After a second or two, they reverse out and jump up, or sideways, to the next flower and repeat. Then away on their wings. 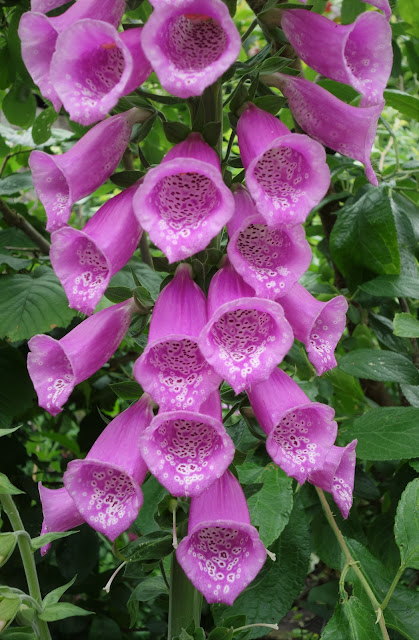 Trouble is, they often head into our home-made greenhouse, AKA The Polythene Palace, which is never going to win any architectural prizes, but has proved very useful. (And like a sauna these past few hot days.) Its wooden frame is covered with horticultural polythene, supported by arches of water pipe. Since there are flowering bush tomatoes inside, bees elbow me aside as I open the door and buzz in. 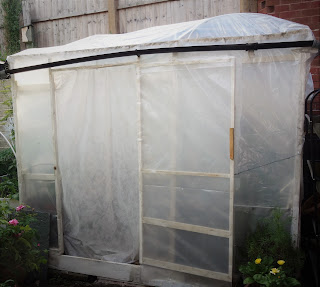 The polythene palace, with bee curtain in place across door. As a beauty, it's no star, but it keeps Jack Frost out.
Once inside, though, the little bee-brains cannot grasp the fact that flying upwards towards the light is not the way out. Buzzing furiously, they bash their heads repeatedly against the plastic, resisting all attempts to guide them towards the door or window. My soft-hearted brother couldn't bear finding the little bee corpses, dead of exhaustion. "We're supposed to be helping the bees, not luring them into death-traps." Hard to argue with that. Hence the anti-bee curtain: a long sheet of horticultural fleece, strung on wire hoops hung from a garden cane. It's stapled to the door frame at one side, and fastened with bits of velcro at the other. We take a sneaky look round for bees before opening it, edge inside and re-fasten it behind us.
It does the job. Hardly any bees have been trapped since it went up -- and since the window is always open in this hot weather, it's a little easier to catch the one or two who have in a flower pot and put them out the window. The curtain also considerably increases the temperature inside, making the tomatoes and peppers happy. I think I'll keep it in place this winter. 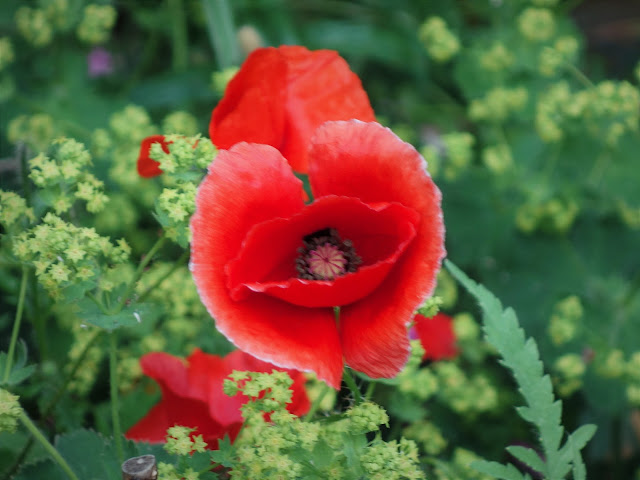 We get a lot of bees, of all shapes and sizes. Some with white bums, some with buff bums. We have carder-bees cutting neat little holes in leaves, which they then use to line the holes in the bee-hotel. And masonry bees nesting in the holes left the house walls by cavity-insultation.
We have many different hover-flies, all trying hard to look like wasps. Troops of ants. Little orangey yellow moths and punkish caterpillers with loud yellow stripes and mohicans. And many other insects beyond our powers to identify. Except the brilliant scarlet lily beetles, which we spot on our lilies now and again. They make no attempt to hide, which is just as well since, with bright scarlet bodies against dark green leaves, they'd look a bit silly if they did. We have to approach them stealthily because at the first hint of danger, they give a small but audible squeak and hurl themselves off the leaf they're feeding on, to the ground, where they speedily bury themselves. 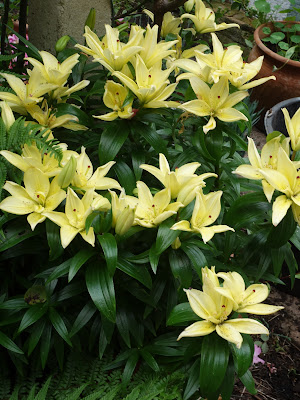 The above are Asiatic lilies. They're lovely, but I'm keenly looking forward to the tall Oriental lilies with their big, scented, trumpet flowers. They're in bud, but yet to flower. 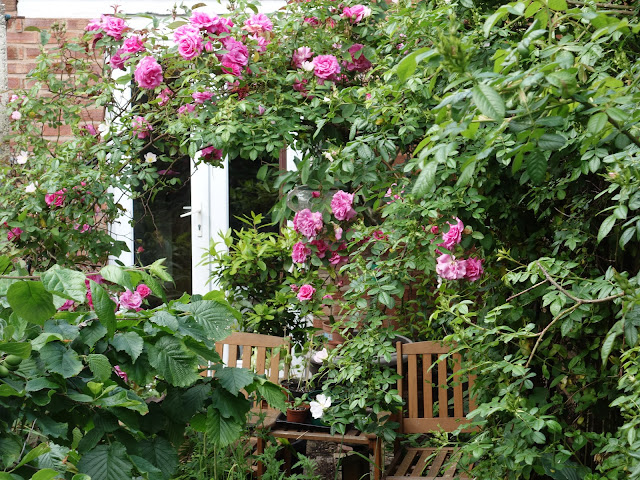 It's been a battle to dead-head the roses, lilies, geraniums and all this year. The flowers hardly seem to open before they're dropping petals and going to seed. I was blaming the hot weather, but we've had hot weather other years without flowers 'going over' so speedily. Then it occured to me that flowers go to seed when they've been fertilised. So, maybe everything is going to seed so fast because there are more pollinators in the garden this year than in previous years? Despite the lethal greenhouse.
This may not be true, but I'd like to think it is, because it means we're succeeding in making a welcoming little habitat.
Oh -- writing? I haven't been doing much writing. There are beans to plant out. And a new parcel of shade-loving plants...
' Authors Electric Blog foxgloves greenhouse lilies roses Susan Price wildlife garden

Umberto Tosi said…
Thanks for this lovely walk through your garden, Susan. It was much needed today! You let us smell the flowers and the vines, hear the bees buzzing and feel the poetry!
25 June 2022 at 00:24

Jan Needle said…
That's lovely, Sue. A friend of mine has taken to painting his hand with sugar water. When he finds an exhausted bee he invites it onto his hand until it's supped enough to fly away, invigorated. Great to watch!

Sandra Horn said…
What a lovely summery post! I always think lily beetles have a fatal design fault in their colouration but at least it makes the little perishers easy to spot and umm...deal with. I love the greenhouse.
25 June 2022 at 22:52

Emma Barnes said…
Your garden reminds me of those hidden gardens in children's books ... Tom's Midnight Garden and the rest. Those foxgloves ... mine have been enormous too, like leaning purple towers of bells (and bees).
28 June 2022 at 20:59