All is True in Rumer Godden’s The Greengage Summer, finds Griselda Heppel

First, get rid of the parents.

Rule 1 of writing a children’s adventure story. You have to neutralise the parents in some way because they’ll prevent your child characters running any sort of risk further than climbing the odd tree, or getting home after dark.

That’s why so many heroes of children’s books are either orphans, or have parents unable to function as a result of illness or other misfortune.
For obvious reasons, stories for adults don’t have to follow this rule; hence I was convinced - at the beginning - that a book I read recently was for children, not grown-ups. The heroine was 13, after all, and most of the other characters were younger than that. Their father was away collecting plants in Tibet (the classic Absent Explorer Father trope), while their mother was taken seriously ill right at the start of the story. The children find themselves abandoned in a strange country, having to fend for themselves. A perfect set up for a wonderful, exciting piece of children’s fiction.
Except that it wasn’t for children. And - as I was alarmed to discover - the basic plot wasn’t even fiction.
Rumer Godden fans will have recognised her marvellous The Greengage Summer by now. I’m aghast not to have read her books before, but also wonder why no one seems to talk about them nowadays. She writes beautifully, evoking multi-layered complexities of character and motive with the lightest, sparest touch.
The story may be set 100 years ago, in post World War 1 France, but 13 year-old Cecil’s predicament of suddenly having to take on parental responsibility for her much younger brother and sisters, and even for her older one, among strangers whose human flaws render their kindness all too suspect, is recognisable under any circumstances.
If anything, Godden was far ahead of her time in depicting how brutal adults can be towards young girls just growing into womanhood. Sixteen year-old Joss, Cecil’s beautiful older sister, embodies a dangerous combination of power with innocence which makes her intensely vulnerable and yet, of course, victim-blamed by jealous adults. Ultimately, Godden makes clear, this is a bunch of children, trying to keep their heads above water in surroundings of intrigue, betrayal, predatory desire and actual criminal activity. It’s a brilliant thriller woven on to a classic storybook structure in which the child characters are cast adrift and must battle for survival in an alien environment, as they have to in Richard Hughes’s A High Wind in Jamaica. Or even in William Golding’s  Lord of the Flies.
How clever, I thought, of Godden to draw on her memory of a childhood holiday in France and use it as a springboard for such a terrific plot.
Then I read the introductory pages. I tend not to do this until the end of a story, in case of spoilers (believe me, it happens). Godden’s Introduction to the Third Edition of The Greengage Summer isn’t a spoiler per se… more of a revelation. Because it’s all true. The absent explorer father. The sick mother. The children dumped in a hotel in Champagne country, resented and neglected by all the adults in charge except for the one charming, tender-hearted, noble friend who really understands their needs…. and yet is leading the most dubious double life of all. Truth is infinitely stranger than fiction and it takes a gifted, experienced writer like Godden to make what is essentially a true story work as a gripping, heartstopping narrative.
I can’t wait to read more of her books. I have one at home called The Dolls’ House. In the children’s bookshelf, of course, where else? 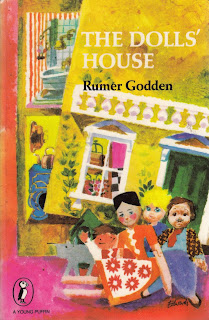 Silly me.
Wait a minute. I think this one may really be a children’s book….
OUT NOW
The Fall of a Sparrow by Griselda Heppel
BRONZE WINNER in the Wishing Shelf Awards 2021
By the author of Ante's Inferno
WINNER of the People's Book Prize
www.griseldaheppel.com
https://griseldaheppel.wordpress.com.
Authors Elecric Blog childrens books Griselda Heppel Rumer Godden The Greengage Summer

Peter Leyland said…
How interesting Griselda. Rumer Godden is a neglected writer indeed. I well remember listening to a 1970s radio broadcast of The Battle of the Villa Fiorita in weekly instalments, which was mesmerising. It contains all those elements of children up against the adult world which you so well describe. I have also read The Diddakoi because I taught children from the group so described, though we might have a different understanding of them today. I think it was a TV series back then.

As for The Greengage Summer, well I have to say I haven't read that, but will look out for it. I loved Richard Hughes's A High Wind in Jamaica too. I hope you get on well with The Dolls House.

Umberto Tosi said…
Thanks Griselda. I've put Greengage Summer on my must read list.
1 October 2022 at 03:01

Griselda Heppel said…
Thank you both. I’m glad my post intrigued you enough to want to read the book. My husband just read it and thought it extremely good, which is high praise from him. And Peter, thank you - I had a memory at the back of my mind of hearing a Rumer Godden book serialized on BBC radio 4 decades ago, narrated by a child trying to take responsibility for her chaotic family, couldn’t for the life of me remember the title - and that was it, The Battle of the Villa Fiorita! I can now hunt that one down too.

It’s a theme explored in a different way by Edith Wharton in The Children. Maybe that should be the subject of my next post though Whartons books are so heartbreaking I can’t read them too often.
3 October 2022 at 18:13