Royalty is very much on my mind lately, with this post publishing just two days after the state funeral of Queen Elizabeth II. We now have a new monarch, King Charles III. But this post is not about him. I'd like to introduce you to a slightly lesser-known monarch... meet Richard Booth (1938-2019), bookseller extraordinaire and self-proclaimed King of Hay!

If you've ever visited Hay-on-Wye on the border between England and Wales, you'll already know its fame as a "town of books". It seems every historic street contains a bookshop of some description, many of them selling second-hand volumes that will keep your average book lover (me!) happy for hours browsing the shelves for rare copies of magazines and bargain paperbacks of every conceivable genre. The Hay Literary Festival has become big business, celebrity authors rubbing shoulders with debut novelists as they give talks and interviews to packed marquees on the Festival site. I can remember going to see JK Rowling back in the days when children's authors were still confined to the local school hall - there was standing room only that year and a queue around the block for signed copies of her Harry Potter books. It seems King Richard of Hay was responsible for putting the town on the literary map, after opening his first secondhand bookshop there in 1962 and filling it with books shipped over from America. 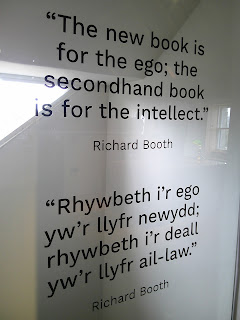 These days, I prefer to visit Hay during non-Festival weeks to avoid the crowds, and my latest visit happily coincided with the reopening to the public of Hay Castle, once the stately home of Richard Booth. Living in the castle obviously gave him grand ideas. In 1977 (Queen Elizabeth's Silver Jubilee year), Richard declared himself 'King of Hay' and the town of Hay-on-Wye to be an independent kingdom.

With a nod to the Roman Emperor Caligula (who, according to legend, named his favourite racehorse a Consul of Rome), King Richard promptly appointed his own horse - Goldie - as his Prime Minister.

Hay Castle has suffered two fires in its history, the second one towards the end of 1977 that destroyed the roof and some of the original features. When Richard Booth sold the castle in 2011, the Hay Castle Trust took over and began a programme of restoration.

In the basement, I enjoyed catching up on the castle's history, which takes the form of an atmospheric light show beamed on to the stone walls. Legend tells us that Matilda, wife of William de Braose, built the castle in the 12th century using stones she gathered in her apron. Since then, it has endured battles, been sacked by Prince Llywelyn the Great, and later in more peaceful times extended to make King Richard Booth's former home and the impressive building we see today.
Hay Castle is now open to the public with a cafe, exhibition space, and - of course - a bookshop. Well worth a visit if you are in the area... and I challenge you to leave town without acquiring a book (or two or three).
*

Her novel about Emperor Caligula's racehorse Incitatus combines the pampered stallion's viewpoint with chariot racing and gladiatorial battles in ancient Rome, and is suitable for readers aged 10 to adult.

Peter Leyland said…
Well, you will know I love Hay, Katherine, if you remember my account of a Whitsun dalliance there on AE. I have also been filmed by Channel Four standing in front of Richard Booth's bookshop as it was, under an umbrella in the pouring rain!! I didn't know all the other history though so thanks for filling in the gaps. I have visited Hay bluff but never Hay Castle. Sounds fascinating and I will now have to visit out of festival time which has become more and more frantic since the old primary school days. Thanks for a post that gave me great memories and that's a nice picture of you at the end.
21 September 2022 at 14:56

Katherine Roberts said…
Ah yes, it does sometimes rain in Hay... but there are plenty of bookshops to take shelter inside until it stops :-)
22 September 2022 at 12:19

LyzzyBee said…
A lovely piece. I haven't been to Hay for ages. Last time I went with a group of friends, I whipped one into a frenzy of pity for a slightly damp Jane Eyre on the Outdoor Bookshelves at the castle, very amusing!
23 September 2022 at 17:45