Of Places and People by Debbie Bennett 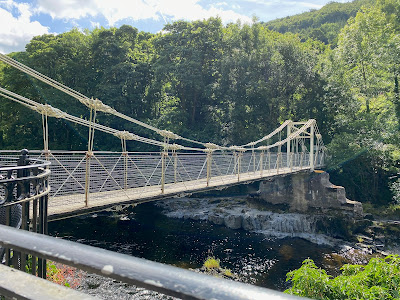 There’s something very spiritual about certain places. They don’t have to be places of religious worship, but they quite frequently are – indeed, it’s the spirituality of a place that often inspires the building of a place of worship. Maybe it’s the peace and quiet, or a location far away from centres of population
We spent a few days in Llangollen recently at the Chainbridge Hotel. So called because it does indeed have a chain-bridge over the river Dee; the hotel is perched on a narrow strip of land between the start of the Llangollen canal at the Horseshoe Falls and the river Dee. The majority of rooms have balconies overlooking the river and the constant loud white noise of roiling water over the rapids is curiously soothing at night. 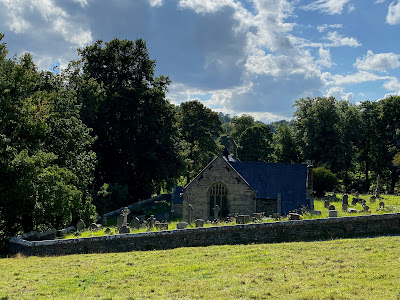 But if you walk up past the Horseshoe Falls on a small footpath through the woods, you come to a tiny church in the middle of nowhere. Llantysilio church dates back to the 12th century, but it’s suggested that its location may have been due to the existence of an earlier site of pagan worship. If you visit, you can see and feel why – there’s an overwhelming sense of peace about the place both inside and out. The graveyard is mostly overgrown, with only a few of the imposing gothic headstones favoured in such places. It’s mostly unassuming headstones and crosses, overgrown with ivy. There are yew trees with cool dark places underneath, full of echoes of the past. Next door is a more modern graveyard, but this older version seems mostly Victorian now, although who knows how old the bodies contained within the perimeter walls actually are? 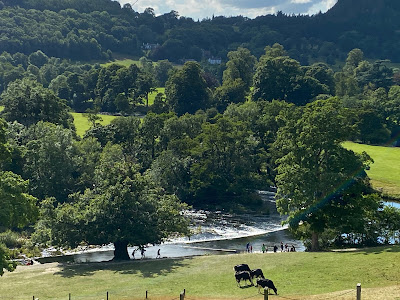 It’s an active church. There are still services and it must be wonderful place to marry and comforting to mourn. Something speaks to the soul and as you step through the lychgate, you can almost feel the transition onto consecrated ground. Food for many a horror or ghost story, maybe, or just a place to recharge your batteries.
Are places spiritual because of what happened there? Does the act of worship bless the land as well as the people? Regardless of religion (or lack of it), do people influence the land, or does the nature of the land influence the actions of the people? I’ve always liked the mythos whereby the king is the land and the land is the king; the Arthurian sword in the stone and the round table are examples of this. Susan Cooper’s Dark Is Rising sequence was hugely influential on my writing (and further reading) as a child and adult – I remember discovering the Welsh places were actually real and even now, I can drive down the Tywyn road in Wales and look up at Bird Rock and wonder …
www.debbiebennett.co.uk
chainbridge Dark is Rising debbie bennett horsehoe falls llangollen llantysilio susan cooper

Umberto Tosi said…
Your evocative post reminded me of my avorite "church" stops in the great outdoors. Half dozen spring instantly to mind, including a grove of giant redwoods in California's Sequoia National Park, and a beach tucked below giant palisades along the Pacific Coast near Big Sur. You get the picture. No matter how much I considering myself a nonbeliever, I am filled with the presence of divine spirit the moment I arrive in such places. There, as you point out, one finds one's Excalibur....
6 September 2022 at 02:41

Cecilia Peartree said…
What a lovely post. I am not a spiritual or religious person but I agree that certain places are soothing to the spirit. Usually the quieter places, sometimes in woodland or moorland, though you can also find sanctuary sometimes in the middle of a city.
(I love Llangollen also! - we have family in North Wales whom we sometimes visit)
6 September 2022 at 14:41