Recently I have been doing some research for a novel. I write historical fiction so I like to mention real people, real places and real events. Anything to help give my historical setting authenticity. It was while searching for some of these ‘real’ people – as in people whose names and deeds are recorded in history – that I came across some intriguing names. My books are set in medieval Wales so that does explain some of the unusual spellings and meanings I have come across.

The first that caught my interest was Gwenwynwyn ap Owain Cyfeiliog (d 1216). It bothered me because his first name sounded rather soft for someone who was regarded as quite a formidable ruler in his day. Too many ‘wyn’s for a start. And then my Welsh speaking  son informed me that Gwenwyn means poison. Ah, makes more sense, I thought! Incidentally, he was the son of (ap) Owain Cyfeiliog who was apparently a poet as well as a ruler. I guess he named his son?!

My favourite find was Rhys Gryg, or in translation, Rhys the hoarse (d.1234) another minor Welsh prince. Sad that his memorable feature was that he had a husky voice. But then many other prominent figures of the past have been given nicknames to do with how they looked or behaved, nicknames that have stuck: Longshanks, Lionheart, Lackland. 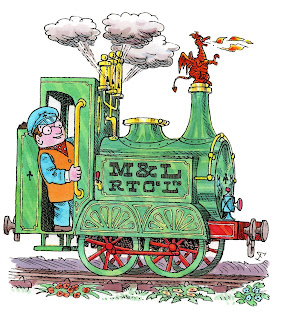 I have been around long enough to remember a certain children’s program about a small Welsh steam railway, called ‘Ivor the Engine’. Those of you who also remember it will no doubt remember the name of the engine driver, ‘Jones the Steam’. Is this a Welsh peculiarity I wonder – of adding a person’s employment to their name so as to differentiate them? Could it be something to do with large numbers of people sharing the same surname: Jones, Williams, Parry? I didn’t actually believe that people were named that way until I had lived here in Wales for a while. I’ll admit that I  haven’t ever met a ‘Jones the …’, but ‘Huw Taxi’ drove my kids to school and ‘Dai Post’ delivered our mail!

So what if we decided to rename ourselves according to a physical attribution, a character trait, or indeed by occupation? I could be ‘Joy the Grey’, but that implies a level of wizardly wisdom I cannot claim to possess. More like ‘Joy the short-sighted’ as my reading glasses are now my constant companion. I could also be ‘Joy the Procrastinator’. Expert at that. As to my occupation, I could refer to myself as ‘Joy the Writer’, but in true Welsh tradition it would have to be contracted… so, ‘Joy laptop’ maybe?

Have you come across or used any magnificent names in your research or writing? What about if you retitled yourself according to the guidelines above? I’d love to hear those!

Joy Margetts has loved writing for as long as she can remember. A retired nurse, mother of two, and a new grandparent, she also has a lifelong interest in history. She makes her home on the beautiful North Wales coast.

More information on Joy and her writing, and her personal blog, can be found here www.joymargetts.com

Bob Newman said…
In Under Milk Wood there are fine Welsh names such as Organ Morgan and Dai Bread, with his two wives Mrs Dai Bread One and Mrs Dai Bread Two.
I've been trying to remember a particularly quirky royal nickname I'd heard recently. I failed, but in searching for it I discovered Ivaylo the Cabbage (of Bulgaria) and two fine Manx rulers, Ketil Flatnose and Olaf the Titbit.
In Hitler's time there was an Austrian Nazi called Seyss-Inquart, whose second barrel is pronounced "inkfart". I was never able to take him as seriously as I should.
As for myself, if I were known as Bob the Rhymer, Steeleye Span could sing about me.
23 September 2022 at 12:09

Peter Leyland said…
I have a memory of that naming system Joy. When my grandparents retired to Anglesey in the 50s and we used to visit I remember them saying 'Jones, the post' and 'Williams the milk'. My grandfather set uo some goalposts in a field in the village so should have been Leyland the keeper! Thanks for the blog.
23 September 2022 at 13:03

Ruth Leigh said…
There were some great royal nicknames! Ferdinand the Hairy and Juana the Mad (both of Spain) and good old Foxy Ferdinand who I think was the King of Bulgaria. I suppose I might be Ruth the Loquacious. I loved Under Milk Wood and Ivor the Engine. Loved this blog too. I use the winners of my book launch competitions to name some of my characters and also those who first buy a book at an event get put in too. Real names of real people I find work better. What does ap mean by the way? I've always wondered.
23 September 2022 at 13:47

Joy Margetts said…
Thanks all! Bob, there are some corkers there... and should I admit that as a inhabitant of Wales I have never read Dylan Thomas! Love that you all found the blog entertaining. 'Ap' means son or daughter of... So the surname 'Parry' actually came from 'Ap Harry'.
23 September 2022 at 14:22