By Agnieszkas Shoes - December 16, 2012
I'd been planning to say something highly controversial for Christmas. Something about Modernism and critical theory and the role of the explanatory text. Then I thought that might be heavier than the Christmas pud I've been preparing so that can wait. Instead, here is some poetry.

These beautiful postcards feature imagery by Veronika von Volkova. The words are mine. You can buy them as actual postcards if you like ( just paypal £5 to songsfromtheothersideofthewall@googlemail.com and I will send them straight out - there's an original poem on the back). The words and the images are from my first ever solo show, Some of These Things are Beautiful, which will premier at Cheltenham Poetry Festival on April 24th.

It's a privilege to be able to work with Veronika again. Her imagery has the exact mix of joy and nostalgia, darkness and hope, that I try to convey in my poetry. I hope you like the results. 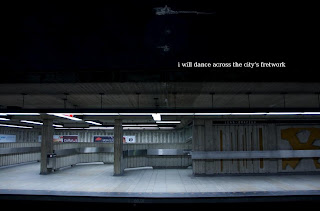 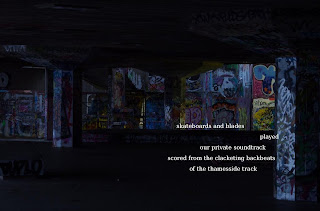 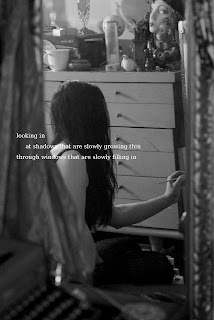 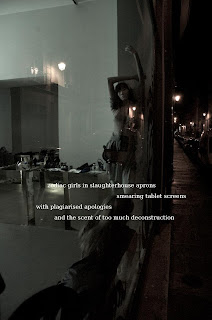 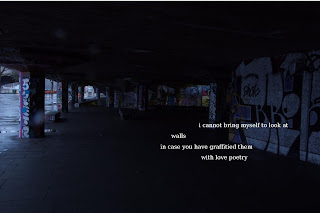 And as a Christmas offering, here's a new Christmas poem:

Through unpulled curtains,
Yellow nets
Through sherry vodka and regrets
We watch a nation with its Christmas box –
Poptastic toss
And TV dross
And things designed to remind you of your loss

Don’t spare a line at a slam or a rhyme
Or prayers to non-existent gods when mass bells chime.
If you want to give.
If you want to stop the clocks
To put the slow tick tock of grown men’s loneliness in stocks
And let them live…
Give
Time

John A. A. Logan said…
Thanks Dan, a powerful new poem...a funny thing happened there while I read, well, 3 funny things:
1) In 3 places I found myself smiling at how much I was enjoying, and about to make mental note of a line to quote as my favourite, but then jolted back to seriousness again with the next line
2) The rhythm entered me until I started to recognise your unique rhythm, and then realised I'd be able to recognise that singular rhythm now as Yours, wherever I saw or heard it...Poetic Fingerprinting
3) Just following on from discovering again what is unique in your poetry...that singularity which consists I think in a driving through of phrase (perhaps often in a salvo of 3 interlinked and even similar lines...it's almost like metal-mechanical Driving Home of point...like the moving-machine-parts in Lang's Metropolis...like you generate three lines one after the other, like piston-action...or like a boxer Jab-Jab-Punch)...but just after the singularity struck me, unique to you...I had an end-rush of intuition that the poem belonged in a family of poems linguistically/rhythmically...and it's T.S. Eliot'e poem, Preludes...that was shouting out from my subconscious, telling me that somehow, somewhere, in lineage...there's a connection to your work, probably when the lines step up in intensity like high-precision pneumatic tools...the Eliot-mark, and it's a rare thing to see or find in a poem...especially in the era of, yes, "Poptastic Toss and Tv Dross"

Dan Holloway said…
:) Haven't kept on top of it as much as I normally would, feeding it brandy every week since June, so not quite as much of a punch as usual!

Very interesting. I think because I write a lot of poetry for performance, I slip into a particular rhythm that somehow works internally - maybe it's some very deeply buried musical thing about resolution, but I do find myself being pulled to certain internal rhyme schemes and rhythms again and again, to the extent I can find it difficult to write differently.

George Fripley said…
Simply a wonderful poem Dan...I have read this out loud three times and each time it gets better.