It's the way that ya tell em -- Karen Bush 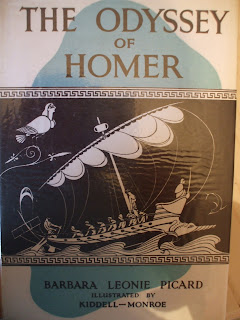 At the age of eight I was discovered curled up in a chair reading my Dad's battered old Penguin edition of The Iliad. I'd like to claim I was a child prodigy, but it really would be a blatant lie: when the book was gently prised out of my fingers and replaced with a version more accessible to my tender years, I found it much easier going. The Iliad was followed in quick succession with The Odyssey which I liked even better: I still have the copy, bought by my Mum, back in the days when hardbacks were Expensive. And that was followed by a collection of Greek and Roman myths, by Roger Lancelyn-Green - and I liked his Robin Hood much better than some of the others I also read.
It was this with this discovery of multiple versions of Robin Hood that it slowly dawned on me that Not All Stories were Original. (See? Told you - definitely not a Child Prodigy.)
Sometimes it was a re-telling of a story which someone else had written. 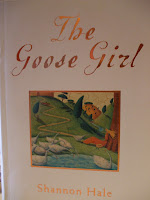 Sometimes the writer did a brilliant job, and sometimes it left me cold: I loathed Charles and Mary Lamb's Tales from Shakespeare which I thought were feeble, boring and patronising. But a good story, well told will always be a joy to read, whether following the original plot or giving it a few deft tweaks. I enjoyed Shannon Hale's version of the Brothers Grimm's The Goose Girl immensely, and after having to return Thomas the Rhymer by Ellen Kushner to the library, tracked down a copy to buy so I could read it again whenever I liked. As for Diana Wynne-Jones' take on Thomas, Fire and Hemlock is my most favourite of her books: I adore it. 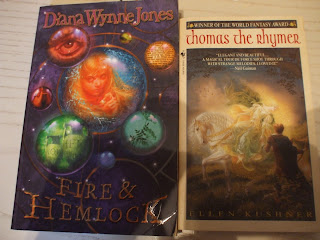 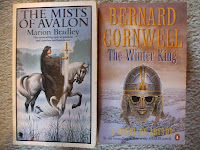 King Arthur has been a popular source of story recycling too.
I enjoyed Marion Zimmer Bradley's The Mists of Avalon, and thought Bernard Cornwall's version not only gripping but with a good twist too. 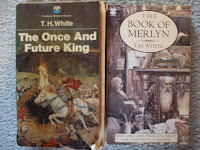 But by far my favourite version is the one that TH White wrote, The Once and Future King: possibly my favourite book of all time, my desert island book, and which far surpasses the original. Here is Le Morte D'Arthur as Malory should have written it.

Have you re-written any old stories, or got any favourite re-tellings?

The Great Rosette Robbery and other stories

(A few old ones dusted off and buffed up, plus a few new ones for good measure) 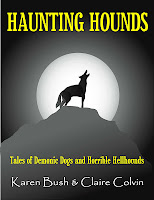 Or a few spooky ones if that's more to your taste ... Haunting Hounds: Tales of Demonic Dogs and Horrible Hellhounds

And as a special freebie for Christmas, there's a new short story with a touch of tinsel! No link yet as I'm racing to finish writing it, but here's the cover ... don't forget to add the title to your Kindle Christmas bookshopping list!

Chris Longmuir said…
Ah, memories! You've just taken me on a journey of my childhood reading. I loved anything to do with myths and legends, and anything Arthurian. I must check out your other suggestions as more modern takes on old stories.
10 December 2012 at 10:07

Susan Price said…
I second Chris! I loved and still love all folklore, myths and legends. I think the ones that particuarly enthralled me as a child were the ones that explained the existence of something - y'know, like spiders being a weaver called Arachne transformed. And folklore taught me a lot about story-telling.
I love what Jill Patton-Walsh said: 'Modern novels go back to Ullysses, but story-telling goes back to Odysseus.'
10 December 2012 at 11:17

Lexi said…
As a child I disliked Charles Lamb's Tales from Shakespeare too, and I enjoyed reading the plays. Lamb is so mealy mouthed. 'Desdemona, with a singularity rather to be admired than imitated, had chosen for the object of her affections a Moor'.
10 December 2012 at 17:45

Susan Price said…
Have you read Hawthorne on Dido? The racism of those days of 'family values' can be gobsmacking.
10 December 2012 at 19:31

Lydia Bennet said…
I was a total myth-head too as a tot, ended up studying Latin and ancient Greek as a result, not to mention Anglo-Saxon and Old icelandic. I've re-written P&P of course in Lydia Bennet's voice,I've also written several modern versions of Shakespeare's sonnets. I used to love Rosemary Sutcliffe's stories, and later on Mary Renault's novels based on Greek myths (with hot boy on boy action to boot!)
Re old attitudes, just had an fb discussion with another writer on golden age crime novels. I'm re-reading ngaio marsh and the like.Racism, anti-semitism, and most constantly striking of all, class attitudes,are a frequent shock amid the brilliant language, characters and plot, ditto for sayers etc. Sometimes it's characters using language we'd not use now, though without any strong prejudice - the discussion about language just had never happened then - but sometimes, most disturbingly, you feel it's the author's opinion. But it's all part of history and can't be washed out any more than people should do mealy-mouthed versions of Will S!
11 December 2012 at 13:35