Kathleen Jones on Being a Media Tart 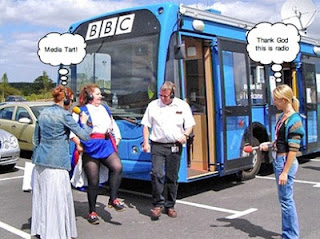 Once upon a time, when I published a book, an elegant twenty-something girl with long legs, long hair, a media degree and a name that ended in ‘a’ would ring me up for a friendly chat, and then, several days later, send me a list of interviews she’d set up, author events, possible TV and radio dates, and people who had promised to review my book. There would be a publicity pack, professionally produced, and regular updates.  I’m only now beginning to realise what a fool’s paradise I was living in!

One of the drawbacks of being an Indie author, for me, is having to do my own publicity.  It’s not exactly my strong-point, in fact I’m rubbish (don’t have the long legs, long hair or a name ending in ‘a’ for starters!)  And I'm not a natural performer.  Some authors, like Giles Brandreth for instance, seem to just love being in front of the camera, or on stage at a literature festival. Like actors, they come alive before an audience.  I’m better at it than I used to be; in the beginning I used to have to drink a couple of glasses of wine before the ordeal, just to get the courage to step onto the stage.
I've always preferred small, intimate events where you get to talk directly to the readers - a kind of dialogue.  And that’s what E-publishing seems to offer you - a direct conversation with the reader rather than the performing animal circuit.  But in order to have that conversation you have to use what is oddly termed ‘social media’ although it’s performed alone with your computer.  Many authors happily Blog, Twitter and Facebook and Google and become Linked-In as though born with a smart phone in their hands. Although I really enjoy blogging - it’s more like writing a weekly column for a newspaper only read by your friends - a kind of personal journalism - there’s something about using my blog as a self-advertising tool that I feel very uncomfortable about - as though trying to sell my loyal followers anything is betraying their trust.

Twitter is something I’ve taken up in the past year and quite enjoy in small doses.  But I don’t have a smart phone, so have to do it on the computer when I have a spare moment - which is rare.  Sometimes it just seems like One-More-Thing-I-HAVE-to-Do, rather than the fun it should be.

Facebook, like Blogging, seems to be a useful way of connecting with people and sharing information painlessly. My Facebook page is mainly for family and friends, rather than a business opportunity, and that’s the way I like it, but I don’t mind posting updates on what I’m working on - my family also want to know what I’m up to!   I like the way Google keeps FB and Blogger linked together with its own platform (not so much fun if you use Wordpress) because it’s less work for me.  I can share something on FB, Twitter and the Blog with a mouse-click. But it does all take time - which is the one thing I don’t have.  There seems to be less and less time to write.

And I wonder, during one of those 3am sleepless episodes, when you start interrogating yourself ruthlessly, whether it’s worth it.  Do my books sell any better for all this blatant publicity seeking?  Or should I just abandon the effort and write more of the damn things instead?
What I hate most is the selling of myself - I’m someone who can’t even knock on doors to ask for charity donations, or to borrow a cup of sugar - I worry about intruding on other people’s privacy.  Now I have to go knocking on virtual doors asking people to give me reviews, feature my book on their blog, let me have a blog interview...

But it seems I’ve got to learn - there’s no-one to do it for me now.  My books just don’t make enough money to pay anyone for publicity.  And if I could learn to perform on stage for a literature festival, then I can learn to be a media tart in the cyber-jungle.  You never know, I might get quite good at it, with or without the legs!

Cartoon Pic - thanks to Brenda at Tyne Bridge Morris. It’s brilliant!  Anyone want to join a female Morris dancing group?
Posted by Kathleen Jones at 00:30

Wow, fabulous lectern! My 3am night terrors are increasingly leaving me feeling that no amount of what I do online comes anywhere close to what I do "in real life", and there's something very satisfying about the in real life experience as well - actually seeing readers' reactions as they happen, completely unfiltered or reflected upon. I think we are most comfortable online when it is simply an extension of our real lives, and I think that's probably how it should be.

I think you're probably right Dan. What bothers me is whether we should be doing any of this at all. Perhaps we should just write the d*** things and throw them out into the jungle and let them get on with it!! But I suppose that's another post .....

You're selling your books, not yourself, of course - and however close we are to our work there IS a distinction. It seems to me that it's not so much the publishers that we're missing it's the e-booksellers. I've just finished reading the Sun's Companion and felt quite cross that it wasn't in a pile in a shop, like my village shop in the old days, for me to step forward and talk about and recommend. I'm not a natural sales lady but it's so much easier when it's someone else's work and also when your reader / potential customer is there with you and you can pick up signals that tell you what to recommend. I agree with Sue Price that Amazon does this as well as any virtual store could conceivably do it - the others, apart from specialists -- are no where. Perhaps we should be focussing all our sales efforts on making Amazon's job as easy as it could possibly be and then just use the social media for socialising. And it's okay to talk about your work when your socialising as long as you listen to other people talking about theirs - AND YOU DO, Kathleen, you're one of the best

AND you're a good speaker and people enjoy listening to you which no-one is forcing them to do.
So thanks for sharing the 3am angst but please don't stop communicating

Thanks Julia and thanks for your nice words about the Sun's Companion. Ever thought of a career as a therapist? :-))

Ha, morris dancing! I used to do that. Still got the clogs (one is acting as a doorstop right now...)

Isn't it terrible having no natural self promotion instinct?
I think you have plenty of company!
The anxiety I suffer over promoting myself or my own work is a misery!
In my professional life I have a confidant persona, but talk about myself or my work to any other than close friends and I am a blithering wreck!

I'm with you on this. The problem as I see it is in our inhibitions. For example, my granny's favourite saying was 'You never blow your own trumpet, it's vanity' and it's very difficult to get away from that, because to publicise and market you do have to 'blow your own trumpet.'

Self-publicising bores me. I try, but give up. Trad publishing wins hands down on this one, and it depresses me that I have to do it - it's humiliating.