Murder in the best possible taste! By Ann Evans

Who doesn't love a good whodunnit​​?

I'm quite a fan of crime books, so back in the year 2000 I was pleased when Scholastic Children's books commissioned me to write four murder mystery books for kids.

They were to be Sealed Mysteries, with the last chapter as a pull-out section, that could be tucked back inside itself.
It was a new concept as far as I know, and probably one that no one else has re-done. I guess that sales didn't meet their expectations, as the fourth book in the series got as far as the proof stages and the cover all designed but sadly never made it into print. 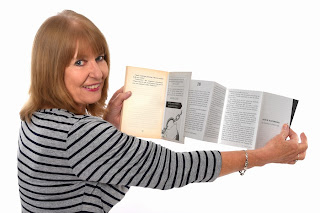 Although not a financial success, I know that readers have enjoyed them, and when I do school visits these days, present day youngsters still find it a really quirky and novel idea that they seem to like.

About a year or so ago, a young woman brought her toddler into the photographic studio I share – and where some of my books are on display. She spotted Fishing for Clues and was surprised to learn I was the writer. She told me she'd got the book as a child and loved it – she even remembered what the story was about. She said she'd still got the book, and that it was one of the things she'd kept when growing up.

When the rights for these Sealed Mysteries were reverted back to me, I set about bringing them out as ebooks. But of course couldn't replicate the pull-out pages, so when you reach that stage in the ebook, you find a link to certain pages on my website where you'll find some clues and red herrings to help readers work out who the villain is.

They obviously couldn't be called Sealed Mysteries, so had to come up with a new series name. I also wanted to make it clear that they are murder mysteries – I didn't want anyone reading the books who wasn't aware that it was a murder mystery, crime stories aren't for everyone. And while the books aren't gory or violent, sort of 'murder in the best possible taste!' (and my own grandchildren love them) there's no getting away from the fact that a dastardly crime gets committed in each book, and my young heroes and heroines find themselves involved in one way or another with these bright young sleuths trapping the villain in the end – at the same time as getting themselves into (and out of) terrible danger.

After some deliberation, I called them Little Tyke Murder Mysteries, and my granddaughter posed as a little tyke which my photographer pal, Rob turned into a cartoon-style version of her for my logo. He kindly created some new covers too using a piece of red shiny fabric (Stealing the Show), next door's brick wall (Pushing his Luck), A wooden box (Pointing the Finger) and a little area of water from a canine hydrotherapy pool photo he'd taken earlier for an article. (Fishing for Clues)

The books are for 8-10 year olds, and making sure all the characters had a motive for committing the crime, and the ability and opportunity to do so too, was challenging enough, then I had to slip in some red herrings and some clues – including one that most definitely lead the reader to the right villain, if they spotted it. Not the easiest books to write, that was for sure!

Here's an extract from Fishing for Clues. As background, Candy and Jake are helping their dad clean up the narrowboat he's bought. It had been left abandoned for a year, the owner simply vanished leaving all his possessions behind – including his diary. Candy finds it very strange that someone would deliberately leave all the things they treasured. She's starting to worry that maybe he hasn't gone that far...

Candy gazed around, holding on to the sink to keep her balance as the boat bobbed about on the water. It was quite pretty really, beneath all the dust. Every wall and door was decorated with canal art, bright pictures in reds, greens and yellows. Even the pots and pans were painted.
“Look,” she said, glancing at a bright red kettle sitting on old newspapers on the table. “He was halfway through painting a scene on this kettle. Look it’s someone fishing in the canal…”
“All his paints have dried up,” Jake interrupted, jabbing a rock–hard paintbrush on the tabletop.
Candy frowned. There was a mug and plate on the table too, and half a loaf of bread which was now just a lump of hard green mould. What looked like the skeleton of a fish lay dried up on the plate next to a knife and fork, an unwashed saucepan sat on the cooker. A pile of ruffled bedclothes lay untidily on the top bunk.
“It looks as if he abandoned the Baloo in a hurry,” she murmured, glancing around the galley.
“He’s even left his clothes and shoes,” announced Jake, opening another cupboard. “Pooh! And his socks.” He shut the cupboard door quickly and opened the next. “Hey, look at this!”
“What have you found?” his dad asked, stooping down to take a look.
“Bottles of booze – brandy! Loads of it.”
Mr Everton picked up one of the fat brown bottles and read the label. “Mmm, excellent brand and pretty rare. Can’t buy it in this country. It must have come from the Continent. You wouldn’t leave this behind unless you had to.”
“See?” Candy murmured. “I told you it was odd.”
Jake continued delving through the cupboards. “This one’s stuffed full of papers, letters and things. Hey, was his name Benjamin Fisher?”
“Yes, I believe so,” said Mr Everton. “Just throw it all away. I’ve brought plenty of rubbish sacks.”
But Candy was still puzzled. Why leave everything behind like this? Clothes, letters, all that brandy… He was halfway through painting a picture on a kettle. He hadn’t washed up his dinner plate. It was just so odd.
Jake sniffed at a green piece of mould that had once been a slice of bread and butter and waggled the dried–up fish bones at Candy. “Mmm, nice. Fancy a sandwich?”
“No, you eat it,” she answered, smiling sweetly. But her smile soon turned to a frown. “He must have gone out after his dinner and had an accident or something. It’s so sad.”
“It certainly looks that way,” her dad agreed. “But these things happen. Bad luck for Benjamin Fisher, but good for us. I’ve always wanted to own the Baloo,” he gazed around the boat, smiling happily, “and now I do.”
“But aren’t you bothered about what happened to him?” Candy insisted. “This was his last meal. That was his last painting…” her gaze turned to the bundle of bedclothes. “It even looks like he’d been in bed…”
Her heart lurched. There was a definite shape to those bedclothes. An icy shiver crawled up her spine. “Dad… you don’t think…?”
A look of horror spread across Mr Everton’s face. “Died in his sleep, you mean? And no one discovered him?”
Jake’s brown eyes looked like saucers. He backed away from the bunks.
“Have a look, Dad,” Candy whispered, grabbing hold of Jake and holding him close.
Mr Everton looked distinctly nervous. “Don’t be so daft. Someone would have checked… wouldn’t they?”
“Maybe not, Candy breathed. “Make sure, Dad – go on.”
He hesitated nervously. “It’s just bedclothes.”
“It might not be,” Candy whispered, her skin beginning to crawl with horror.
Slowly, very slowly, Mr Everton inched along the galley towards the bunk bed. Cautiously his hand reached out towards the bundle of bedclothes.
Candy and Jake held their breath.
Gripping the edges of the grey woollen blankets, Mr Everton yanked them clean off the bed with a load, “Waahh!”
Candy and Jake screamed.
A second later their dad was doubled up with laughter. “You pair of nits! You didn’t really think old Benjamin Fisher was still lying in his bed? Give me a bit of credit, please.”
Candy gave her dad a thump. “You did that just to scare us, didn’t you? You’ve already checked the boat over, haven’t you?”
“Course I have. Honestly, you pair!” he grinned. “Now let’s get some work done.”
Candy glared. “That wasn’t funny. I nearly had a heart attack.”
“I wasn’t scared,” Jake shrugged, the colour returning to his cheeks.
“No, I could see that,” Candy remarked knowingly.
“I wasn’t!”
Candy heaved a sigh as she looked all around. “So, where shall we start?”
“Wherever you like,” her dad replied, still chuckling to himself. “But watch out for the dead bodies.”
Candy pulled a face at him as she tugged the brass handle of a long, thin door. “What’s in here anyway?”
“That’s the toilet,” said her dad. “I haven’t looked in there yet. So if Benjamin Fisher is still aboard, he could be sitting on the loo.”
“Very funny,” said Candy, smiling sweetly and giving the door a pull.
It opened suddenly.
It was a tiny little room. There was just enough room for someone to squeeze in, sit down… and die.
For there, sitting on the loo, pipe stuck between his bony jaws, spectacles dangling from hollow eye sockets, trousers round his ankles and an old newspaper on his lap… was the skeleton of Benjamin Fisher.
Rigid with shock, Candy could only stand there staring. Eventually Jake wandered over and peered over her shoulder.
Candy had never realized until then just how loudly her little brother could scream.

Little Tyke Murder Mysteries are available
from Amazon, or contact me for a pdf version.

Interesting point about how to recreate features like hidden sections in ebooks. Also crime for kids could be a bit of a minefield - especially if you go as far as murder - publishers and buyers might be more wary of this now than when the books came out? It'll be interesting to see how they do, good luck with them anyway!

this just came up on fb http://www.theguardian.com/books/2014/nov/13/violence-teen-fiction-ya-novels-glamorise-crime-catherine-bruton