Mr Adams! Come in, Mr Adams! Rick! Ricardo! Or how about, “the Richmeister”! ’Cos that’s what this book is gonna make you, my friend. Y’know, rich? Ah. Okay. You get it. You writers never miss a trick.

Ritchie, have a cigar. Or maybe you’d prefer a carrot? Ha ha, just kidding. No, the other box. Those ones are kind of… mine.

What can I say? You came to my rescue. “Animal stories!” I hear the market scream. “Won’t someone give us animal stories?!” And then along hops you, with your wonderful, genius, delightful, um, piece of… ah, here it is – ‘Watership Down’. And what do I find? It’s just busting with rabbits at the seams! You know what you are, Mr Richard Adams? A saviour. An honest-to-mercy lucky rabbit’s foot saviour. Because kids love bunnies, don’t they? Boy, do they love the cute fluffy bunnies. And you’ve got floppy ears coming out your… ears.

I’ve got just one or two comments.

Firstly. It’s a teensy bit long. You know, for this reading age group. But – not a problem! Because already I see lots that we could trim. F’rinstance, the long words and rabbit gobbledegook, names like Hyz…enth…lilly-lally something, and Thethuthithethath – ach, forget it – which those kids wouldn’t be able to read anyway, right? And hey presto, the book’s half the length. No, don’t thank me, it’s my job.

Something else we might lose – which brings us to point two – is the blood. Not to put too fine a point on it. I gotta say, and maybe it’s just me – actually I don’t think it is – but I believe you may have gone a bit over the top there. Just a, what’s that phrase? Just a tad. 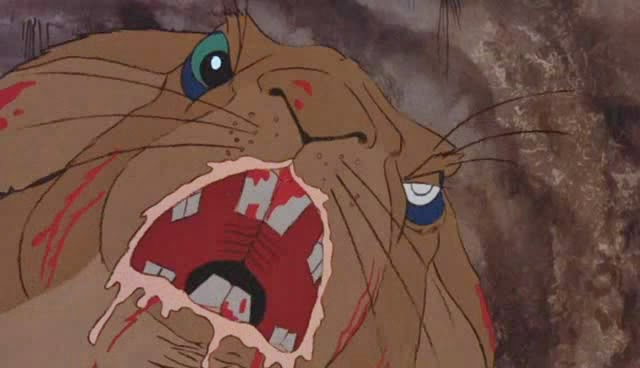 I have to be straight with you, Richard. There’s too much gore. Too. Much. I mean, what the heck? Gassed rabbits clawing each other’s throats out? Ears ripped off? Clawing and biting every other page, snares round necks, bunnies choking on bodily fluids, bunnies fighting to the death, and here, a whole field covered in blood, just on page 4! Richard, Richard… what the actual heck? Did your marriage break up? These are kids we’re dealing with.

Okay, relax. Apart from that, it’s fine. Fine-ish. Moving into fine-ish territory. But if you don’t want this imprint to be legally obliged to change the title to Watershed Down, then you’re gonna have to work with me here. Hey, I said much the same thing to that Mr Kipling, when he came in last week. Mr Kipling, I said, your Jungle Book is exceedingly good (I think he appreciated that), just ditch the fancy words and violence. And I think we ended up seeing eye to eye. Funny thing though – he didn’t even eat one cake while he was here. When I had Stephanie buy them in special.

Now the good news. Point three.  Because I think I have an answer here already. You see, Rick – and I’m just reminding you of this – your readers will be young children. So they don’t need all this stuff you got in here about… you’ll forgive me using a four-letter word… about sex. Oh yeah, I know they are rabbits! But, y’know. Everything they do in the story, it really just boils down to chasing tail, doesn’t it? Yeah, I know it’s because they need to breed and have children! But that’s just not appropriate. Not for children. But Rick, today’s your lucky day! For I have had a vision.

Try this on for size. You know your seagull guy, Keyhole? Excuse me – Keehar. Well, he’s just great. But what about this for an edit? Keehar is not a seagull. Keehar is… Oh, you’re gonna love this…  Keehar is… a STORK!

You’ve got that blank face on again.

Do you see it? Do you? Keehar’s a stork! He can bring the baby rabbits! So you solve the problem of the rabbit cubs right there. No, Rick, I’m pretty sure it is cubs, not kittens… that’s cats you’re thinking of. But doesn’t that just nail it in the bullseye? It solves everything! Keehar brings the rabbit cubs, which means, no rampant rabbit shenanigans, no messy war, no farm raid, no Hazel getting shot, and no need at all for Art Garfunkel to sing. BRI-IIIGHT EEEEYES! Ah, gets me every time.

Have a Bramley apple tart, Rick? It’s still got its crunch.

I’m sorry, the plot? What’s left of it? Well let me see now… We still have the quest to find a new warren, right? Oh, but wait… we just lost the part where they gas the old burrows and stick the rabbit corpses up on stakes. So that doesn’t work. Aha! Got it. Instead, the rabbits are on a mission to find new lettuces… and they can only get them in Mr McGregor’s garden! Bingo! Trust me, Rick, that’ll definitely sell. I can show you the figures from last time. Hazel and Bigwig, they’re gonna make you big bucks! Get it? Big bucks?

Richard, don’t be like that! Where are you going? Oh, I see. That’s the thanks I get. Off you hop, then! Get out of here, bunny man. Go home. Run back to the family! Ha! Diddly-dum. Click! Click! Diddly-dum!

Me too (still laughing, I mean). That being said, I loathed Watership Down. Struggled to get past page 1. I may be the only person in the known world, but I'm unapologetic. I just didn't buy into the devices. Give me Flopsy, Mopsy and Cottontail any time.

great fun Nick, enjoyed it very much! not a big fan of WD myself (love the Watershed down gag!). I agree with Sandra re Beatrix Potter, who is a lot less cutesy than people assume just because she wore bonnets. she was a scientist and a realist and nasty things happen in her books... I wonder what this agent would make of her!

Yes, Nick, great: sadly funny and horribly true. Val, I agree absolutely about B Potter but I also think Watership Down was a great book. And Richard Adams did me a great personal favour, though I've never met him. He let me use Hazel and Bigwig and Snitter and Rowf from Plague Dogs as passing 'characters' in Hare's Choice and also wrote a lovely endorsement for the US edition. So I won't hear a word against him!

I don't hate it or owt, it didn't appeal to me I don't know why. but he sounds a good guy if he did you a good turn Dennis!

They could have used DM for latter Homeland seasons.

Interesting,too, that Adams created the story during tellings to his daughters on long car drives, and it seems he made it up as a way of telling them, by analogy, of his experiences during Battle of Arnhem (A Bridge Too Far)...could only tell them the story by changing everyone into rabbits...:

"By the way, the great English talking rabbit novel, "Watership Down," was inspired by the Bridge Too Far battle. Richard Adams was one of the commandos dropped on the far side of the Rhine, who seized the final bridge. When the British armor assault crossed eight of the seized bridges but was turned back before the Rhine, the Bridge Too Far, Adams and his mates had to swim the Rhine and then make their way like scared bunny rabbits through 100 miles of enemy territory to get back to British turf. A quarter of a century later, he turned the experience into a story about a squad of very English male rabbits who must cross perilous territory to find a new home."

Never imagined this would lead to a discussion about Watership Down...