The Red Envelope by Pauline Chandler

Every week or so, my friend and I exchange books using ‘the red envelope’.

She lives a hundred miles away, so we post the precious envelope with its precious cargo, back and forth. Usually there’s no message with the book. It’s enough to know that the other has chosen the title with the other in mind.  She’s my reading buddy!

The first book my friend sent me was ‘H for Hawk’, which she was reading with her book club. She had enjoyed it and thought I, with my passion for raptors, would enjoy too. I did, to a certain extent, though I thought the writing was a little overblown, the writer succumbing to that tendency some people have to romanticise our relationships with these amazing birds. ( Yes, I do this too, but you can have too much of the oohs and aahs!) Fab choice though.

In return, I sent her ‘Beyond Black’ by Hilary Mantel, one of my favourite writers. 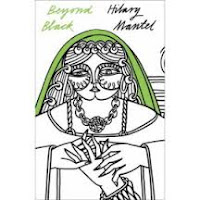 Have you read it?  It’s a hilarious, yet poignant tale about a genuine medium and her relationships with the dead and the living. I never knew juggling the two could be so fraught with mischief, especially if your spirit guide is a little old man with a huge sexual appetite. I say no more.

My friend has since sent me ‘Wake’ by Anna Hope, a beautifully written account of the aftermath of WW1.

Just when you think you have a handle on the events of that terrible era, new information emerges, new horrors, new tragedy. The details of the burial of the Unknown Soldier at Westminster Abbey, and the reaction of those who were there, are especially moving.

I have my next choice ready for the red envelope, but I haven’t started it yet. It’s ‘The Cat’s Table’ by Michael Ondaatje.

Here's what the blurb says: ‘In the early 1950s, eleven year-old Michael boards a huge liner in Colombo, bound for England…Seated at the lowly ‘cat’s table’, as far from the Captain’s table as possible, he makes friends with two other boys, Cassius and Ramadhin…At night they spy on a shackled prisoner..What’s his crime?’

Sounds great! Think we’re both going to enjoy this one.

Wendy H. Jones said…
What a fabulous idea. I think I may have to start one of these up as well. You've also given me some ideas for reading material.
21 August 2015 at 08:47

JO said…
What a great idea.

My neighbour and I buy each other books that we both want to read, and then swap - they can end up in either house and we've yet to fall out about it (after doing it for 15 years it seems unlikely we ever will!)
21 August 2015 at 08:57

Lydia Bennet said…
Yes a lovely idea! And like book groups, it means you get to read books you wouldn't otherwise.
21 August 2015 at 11:53