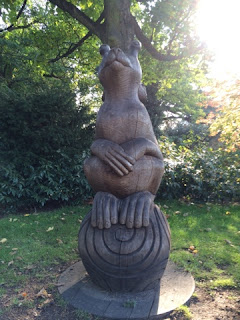 As a writer I have discovered that inspiration strikes at the oddest times. I am currently on a bit of a working holiday in the South of England. Whilst staying with a friend who lives in Eltham, in London, she took me along to Well Hall Pleasance. It sounded pleasant (pun intended) so off we went. Little did I know what a treat I had in store. This used to be the home of Edith Nesbit who wrote The Railway Children and Five Children and It amongst many other books. The picture at the top is the Psammead from Five Children and it. There are a number of these wooden statues in the garden, all depicting different creatures from the books. 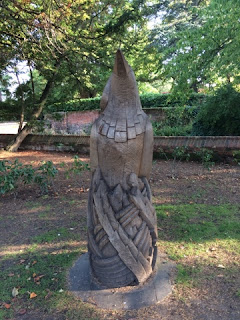 How could one fail to be inspired in such a setting. Knowing that all these years ago E. Nesbit sat here and wrote such magical books, filled me with a sense of wonder. It also filled me with inspiration to write books which could be enjoyed by readers so many years down the line.

Over and above the literary aspect of Well Hall Pleasance it is also a beautiful place to walk and think. The sun shone that day and I wandered down narrow paths over a winding stream and through woodland. There are also well laid out gardens, exactly the same today as they would have been in Nesbit's day. 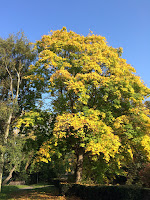 Being October the trees were just beginning to change and the colours were glorious. Nature was displaying one last burst of technicolour brilliance before winter set in. Truly awe inspiring stuff and also inspiring in a literary sense. This is the stuff that books are made of. In my case this is slightly worrying as I write crime books which require a dark atmosphere rather than a beautiful natural setting. However, all is not lost. As the paths wind their way through the woods one strolls through areas which are dark and eerie  This is a perfect portrayal of the way in which life is made up of both light and dark. Did I manage to conjure up any dead bodies. I will leave you to decide that.

My exhortation to you, when writing this post, is to step outside the norm. Do something different. It will fire up your imagination and you will never know when inspiration will strike.

Lynda Alsford said…
How wonderful to be able to visit that place. I loved her books when I was a child. They have been so good adaptations on TV as well.

Bill Kirton said…
Sounds great, Wendy. And I'm with you on the notion of beautiful, sunlit places where all is serene and hopeful being the sort of contexts that throw the blackness of crimes into even greater relief. A killing in some satanic ceremony is almost commonplace, but in dappled leafy glades its disruption of the natural order is shocking.
16 October 2015 at 10:07

Mari Biella said…
Good advice there, Wendy, though I'm frequently guilty of ignoring it. To 'step outside the norm' is exactly what we need to do sometimes.
16 October 2015 at 10:42

Katherine Roberts said…
We have Agatha Christie's holiday home Greenway on the banks of the River Dart just a few miles away, which is also a magical setting even though she didn't write fantasy... maybe writers just need space and places where they can access their imagination? It's increasingly difficult to find.
16 October 2015 at 11:38

Lydia Bennet said…
I love Railway Children in particular. It's always inspiring or at least fascinating to visit the homes of writers we love or admire. Glad you came away with some inspiration of your own Wendy!
16 October 2015 at 14:20

glitter noir said…
Fine advice, Wendy. Funny how it happens, too. A trip to San Francisco last year and a walk in a strange, to me, part of town inspired me to write a different kind of book set...in upstate New York. OH, well.

By the way, kudos on your superbly branded covers. A third book coming out? You're getting faster and faster. I'll order #2 over the weekend.
16 October 2015 at 15:01

Wendy H. Jones said…
Thank you everyone. I love the sound of some of the places that you find particularly inspirational. I would love to visit Agatha Christie's holiday home. Tomorrow I am going to visit the Crime Museum in London. Now that should give me lots of inspiration
17 October 2015 at 21:22

Fran B said…
How right you are, Wendy. It was while on holiday and rambling in the south end of the Isle of Mull that I got the inspiration for my work-in-progress novel set in the Isles of Mull and Iona in 1920s. The cottages built then for the families of the men who built the lighthouses still stand, as well as their lookout tower for semaphore communication. Immensely atmospheric and inspiring.
21 October 2015 at 23:06