Reading My Way Round Dundee; by Chris Longmuir

By Chris Longmuir - October 19, 2015
In the past, authors did not concern themselves with promoting their books. That was a job for the publisher. But times have changed and authors, both traditional and indie, are now responsible for their own promotion. Now, promotion does not come easy to authors who are more attuned to closeting themselves with computer or pen and paper, and promotion is often a chore. However, I had the opportunity recently of engaging in a promotional task which was pleasurable and great fun.

Earlier in the year I was asked if I would accompany a group of American visitors on a tour of Dundee to visit the settings in the Dundee Crime Series, and on the next day accompany them to the fishing to talk about my fisher saga A Salt Splashed Cradle. Naturally I accepted this offer with alacrity.

It was a small group of fifteen people, and they were spending some time in Dundee following their visit to ’s crime festival, Bloody Scotland. They were a lovely group and I soon became friends with all of them. 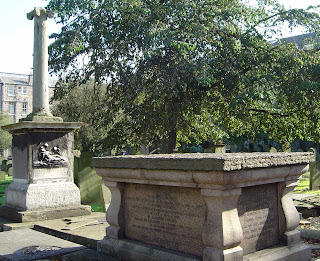 We started out on the Wednesday morning accompanied by the tour leader and a Blue Badge Guide. The guide provided a running commentary on and its history as we travelled through the city. The RSS Discovery, Scott’s famous polar exploration ship, was the first port of call, then we moved through the city until we reached The Howff, the ancient cemetery which I use as my initial crime scene in The Death Game. A flat topped gravestone provided an atmospheric quality to my reading of the murder scene, and it was easy for them to imagine the menace in the scene.

Onward and upward to the top of the Law Hill. The view from this vantage point is fantastic. A panorama of , viewed from all sides. But, of course, being a crime writer my excitement was in the number of places a body could be hidden on the journey to the top.

Next stop was and a visit to the Wildlife Centre which has now been promoted to the title of zoo. This was where I based a scene in Dead Wood. We all gathered outside the bears’ enclosure, where I read the scene and demonstrated how you can manage to throw a body (living) over the extremely high, alarmed and electrified, fence. I did ask for volunteers to prove my theory, but no one stepped forward.

Back to and a visit to the heritage site, Verdant Works, a preserved jute factory where it was possible to see some of the machines working, and find out about the history of jute. I had planned to give a reading here, but we were running quite late, so it was decided to do the reading after our meal at the Birkhill Inn. We had a lovely meal there. I chose the steak pie, and it was delicious. Then, once we were wined and dined, I stood up and read the mill scene from The Death Game.

Following lunch we travelled to Templeton Woods, the scene of historical murders, as well as the ones in Dead Wood. The ranger met our bus and escorted us to a clearing where he had a camp fire burning, and he plied us with tea and biscuits while he talked about the woods. It was here I read some of the Templeton Woods scenes from Dead Wood. It was quite an experience, with wood smoke blowing round me. I doubt if I will ever have such an atmospheric reading again.
The ranger escorted us on a walk through the woods, and then it was time to return to the hotel. A brilliant, but hectic day. And I have to do it all over again tomorrow when we go to Auchmithie. But I’ll leave that visit for my next blog post. Be sure not to miss it.

Catherine Czerkawska said…
Chris, this sounds so entertaining that I wish I'd been able to go. Went to the Verdant Works last time we were in Dundee and thought it one of the most interesting museums I'd ever visited. But what a very good idea for a writer - and a very 'novel' promotional idea too. Excellent.
19 October 2015 at 09:52

Dennis Hamley said…
That's wonderful Chris, and I'm creased up with envy. Oh how I'd love to take a crowd of interested Americans - or any nationality in the world, I'm not fussy - on a ten-day (at least) tour from Suffolk to Anglesey via London, Oxford, Coventry, Hereford and the whole of mid- and North Wales stopping at the places Joslin passed through in my medieval mystery sequence The Long Journey of Joslin de Lay. Well, I can dream, can't I?
19 October 2015 at 11:18

The tour with your American friends sounds amazing. Your novels must have come alive for them. Perhaps I should do a Glasgow - Mumbai with my book 'Bombay Baby.' You have opened up a great new 'travelogue/novel' idea Chris.
19 October 2015 at 13:17

Mari Biella said…
What a fabulous idea, Chris! If promotion were always that much fun, perhaps I'd be more enthusiastic about doing some...
19 October 2015 at 14:44

Chris Longmuir said…
Thanks for your comments, folks, and yes, it was great fun. I told the tour leader I'd do it again in a heartbeat. I hope she doesn't forget!
19 October 2015 at 14:55

Bill Kirton said…
Great stuff, Chris. You put me to shame with your energy and involvement in these initiatives. It sounds like fun for everyone - and especially for readers with an active interest in your genre. When are you going to start seminars on promotional ideas for Dummies? Sign me up.
19 October 2015 at 17:34

Lydia Bennet said…
Such a great opportunity and such fun! Brilliant getting this set up, you are a powerhouse of promo!
20 October 2015 at 11:40