By Leverett Butts - October 23, 2015
Welcome to the second installment of my second count down. This time around, instead of counting down my favorite novels, I'm discussing my five favorite comics/graphic novels that are in some way metafictional. That is, comics that are on some level aware of themselves as works of fiction.


Last month, I discussed Dave Sim's 300 issue saga, Cerebus the Aardvark, which involves a fictional world that includes fictionalized versions of writers from Oscar Wilde to Ernest Hemingway to Dave Sim himself. This month we are looking at an alternate version of the "real" world in which the events of all fiction actually occurred. 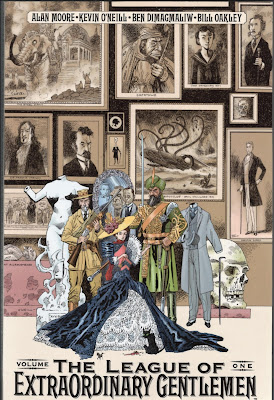 The League of Extraordinary Gentlemen is essentially Moore's answer to the superhero team-up comics that became popular during the 1960's and 1970's such as Marvel's Avengers and DC's Justice Society/League of America. 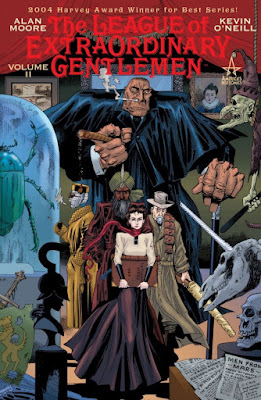 Essentially, a super group of literary heroes, the League of Extraordinary Gentlemen acts as a secret Victorian-era division of British military intelligence. In the waning years of the 19th century Mina Murray, one of the survivors of Dracula's reign of terror, is recruited to assist other heroes of Victorian England: including Allan Quatermain, Captain Nemo, Dr. Henry Jeckyll, and Hawley Griffin. Their mission pits them against both Fu Manchu and Dr. James Moriarty. 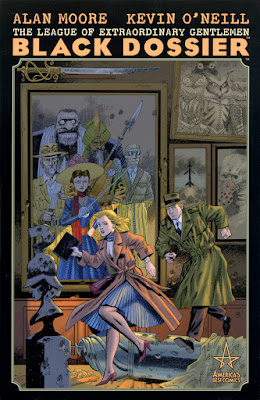 Later volumes have the League helping stop the Martian Invasion of 1898 (allying them with the likes of John Carter and Lt. Gullivar Jones), chasing down the secret history of the League after the fall of Big Brother (pitting them against James Bond, Emma Peel, and Bulldog Drummond), and throughout the twentieth and early twenty-first century, attempting to prevent the birth and ascension of the Moonchild, who wishes to bring about the end of the universe. 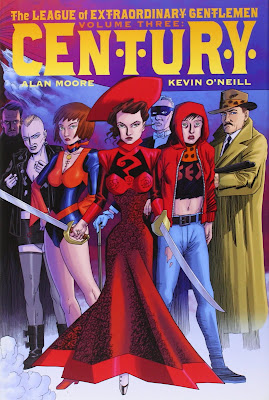 With this series, Moore manages to map out what he calls the planet of the imagination:


The planet of the imagination is as old as we are. It has been humanity's constant companion with all of its fictional locations, like Mount Olympus and the gods, and since we first came down from the trees, basically. It seems very important, otherwise, we wouldn't have it. Fiction is clearly one of the first things that we do when we stand upright as a species - we tell each other stories. Now, Nature doesn't do things for decorative purposes, [...] but since there seems to be little point to telling each other stories all the time - except there must be. We have depended upon them and to some degree the fictional world is completely intertwined and interdependent with the material world. A lot of the dreams that shape us and, presumably, our world leaders, are fictions. We're talking [in this series] about this very thing: the interdependence between the world of fiction and the world of fact.

What I find fascinating about these graphic novels is how seamlessly Moore is able to weave the plots of practically every adventure story from the dawn of fiction to last Tuesday onto one cohesive tale, itself woven almost seamlessly into our own historical narrative, and set in a world very closely resembling our own. The secret history of the League, then, is the history of literature, which is then a kind of history of ourselves. Where much of Cerebus, and indeed other titles on my list, explore how we create and structure stories, The League of Extraordinary Gentlemen discusses how stories create and structure us.

Lydia Bennet said…
Another fascinating glimpse into an unknown world, for me anyway!
23 October 2015 at 14:02