I can’t remember when I first attended the show. It could be as long as thirty years ago. Then it seemed impossibly daunting. So many thousands of books being promoted, none of them by me; so many people who all seemed to know each other well enough to air-kiss or hold intense meetings.

I wandered the aisles downstairs among the publishers for hours and then bluffed my way past the guards upstairs to wander among the agents as they haggled over foreign rights, overwhelmed by the enormity of it all. 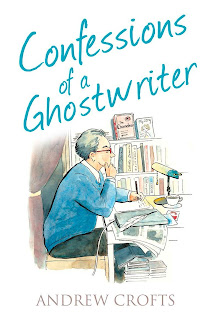 Authors were not expected to attend in those days, so at least I had rarity on my side, but no one really wanted to talk to me either, fearful that I might pitch an idea or ask what had happened to my outstanding royalties.

Once I became more established and had relationships with half a dozen agents and half a dozen publishers, the experience became less overwhelming. I actually had meetings to attend and sometimes I even got to appear on a panel. Now when I walked the aisles I would bump into people I knew and I could exchange air-kisses of my own. One year I even over-nighted in in order to attend two days in a row because I had so many people to see.

But still the facts remain; I became a writer for many reasons, some of which involve not having to walk around Earls Court or Olympia for hours on end, not having to be jostled by crowds, not having to queue to buy mass-produced food which I then have to consume standing up, or fight for a few inches at a table.

I have also become spoiled in my old age. If I have to eat in company I would prefer it to be somewhere where I will get plenty of elbow room and plenty of nice people constantly asking if I need anything and keeping my glass topped up.

In a remarkable and welcome change of emphasis, writers are now positively fawned over at LBF, which means that hundreds of them turn up and there is no rarity value to me being there any more. I am rather afraid of going anywhere where I will be confronted by the inescapable evidence of how many of us there are frantically chasing the same dreams.

It was only by accident that I discovered that almost everyone I follow on Twitter was either involved in the LBF or attending, so by following them I was able to feel like I was there while still fitting a few hours of writing and a few hours of gardening into the day – plus a bit of an after-lunch  kip.

Dennis Hamley said…
I had intended to go this year because there were a couple of things I wanted to be at. Sadly - or luckily, as I now think - I was ill. But I have been several times, mostly because it was a chance to meet people I needed to see but normally wouldn't, usually an American publisher. Twice I went, unannounced, to remonstrate with publishers who I believed - rightly - had treated me badly. I had hoped to take them off-guard and embarrass them. I failed miserably each time. Last time I went I had appointments with two very small educational publishers. One went well, the other never happened because their stall was so small I never found it!
27 March 2017 at 11:36

Anonymous said…
Ha ha, attending the LBF via twitter sounds much the best way to me! I wonder if the same method might work for the Chelsea Flower Show.
29 March 2017 at 11:01