Writing – a hobby, a career or a way of life? By Ann Evans

I'm starting to think that writing is taking over my life! It's not just that I'm spending every day writing something – an article, a bit of my novel, note for a writing class etc., it just seems that all my free time and social life seems to be taken up with going to events and places which I end up writing about.

I'm not actually complaining. In fact if it wasn't for my writing, I wouldn't have anywhere near as good a social life.

This weekend it's Crufts, next weekend it's Comic Con and the weekend after that it's Miniatura. All three events are working jobs, but what nice jobs!

I love dogs, and writing about them is probably my favourite topic. It's taken me all over the UK and abroad, covering so many different aspects of man's best friend. A visit to an army base in Northern Ireland and a trip in an army helicopter stemmed from an interview with Army personnel at Crufts.
We've been fortunate enough to interview Mary Ray and Richard Curtis, famous for their heelwork to music routines at Crufts. 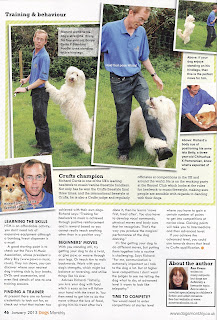 Today photographer Rob and I bumped into a number of people and organisations which we'd written about previously – one being Mrs Averil Jarvis MBE founder of The Cinnamon Trust, the charity that supports the elderly, the terminally ill, and their pets. 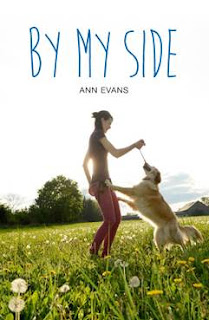 We've written a lot about various assistance dog charities, many of which are represented at Crufts, This led us to researching the work of Seizure Alert Dogs. And last year, I was able to write a short fictional teen book for reluctant readers based around this subject – called 'By My Side'. We'll be at Crufts again tomorrow, to see what other opportunities it opens up.

Next weekend is Comic Con which is wacky and fun, especially seeing all the cosplay people dressed in their weird and wonderful outfits. Plus there's always a line up of celebrities. We've had some great follow up articles from chatting to various famous faces. One that springs to mind is when the late Alexandra Bastedo from Randle and Hopkirk invited us to visit her animal sanctuary which resulted in a really nice article in The Countryman. Stories gathered here often work for Collector's Gazette magazine too. 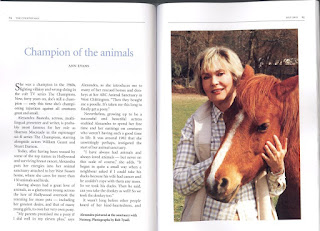 The last weekend in March sees the 68th Miniatura Show. This is an amazing exhibition which has to be seen to be believed. Top miniaturists from all around the UK and abroad exhibit an incredible array of hand crafted miniatures of just about everything you'd find in a real full sized house perfectly scaled down to 1/12th, 1/24th, 1/48th and even 1/144th which allows a furnished doll's house to fit inside a dolls' house. There's lots of skilled craftspeople to write about here, and generally my articles go into Dolls House and Miniature Scene magazine. 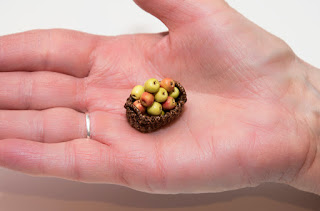 Now if only I'd thought about writing a book about a miniaturist before a certain Jessie Burton did. Ah well!

Anonymous said…
What a joy to be able to combine all the things you love best in life and write about them! And I'm fascinated by the miniatures fair. I didn't know it existed but it sounds an amazing showcase for skillful craftsmen. Not necessarily as spooky as Jessie Burton's wonderful book...
14 March 2017 at 13:09

Ann Evans said…
The miniature fairs are fantastic, you can't believe the detail that goes into the tiny objects, And no, not spooky at all, although I'm writing an article on a haunted dolls house (not really haunted) just with lots of spooky decor. That's for Halloween.
14 March 2017 at 19:40

madwippitt said…
cor that mini basket of fruit! Makes me very covetous :-) And ooooh getting to spend time with Mary Ray, you lucky thing! - everyone's favourite dog lady - so talented and such a lovely 'yes I am rushed off my feet and everyone is trying to get my attention but I can spare you five minutes right now, no of course it is no problem!' person :-) Loved her routine this year - one of her very best :-)
17 March 2017 at 12:00