By Leverett Butts - March 23, 2017
I generally try to stay out of politics on this blog as much as possible. I do enough ranting and raving on my private Facebook page that, to be fair, if the current administration was actually enforcing a pogrom on political dissidents, I'd already be calling dibs on the top bunk of a FEMA camp/artist "colony."

It's not even that I am surprised a conservative president wants to cut resources for these two programs, as far as I can tell, every conservative president since the programs were enacted fifty years ago has wanted to restrict their funding out of some kind of belief that supporting the arts does not add much to the country's benefit. I would point out, however, that the word "much" still allows some benefit, possibly why even the staunchest fiscal conservative has not gone quite so far as to completely eliminate the programs. However, the assumption of the current administration is that these programs have no value whatsoever, one supporter, Brian Darling, a former aide to Senator Rand Paul, has gone so far call them "waste." Others, such as Budget Director Mick Mulvaney, have said that arts endowments "sound great" but aren't "helping anybody."

And that is where I draw the line. Now I could write an entire blog equating this desire to eliminate our country's two most important cultural endowments with the long history of censorship, but honestly, that has been done to death, and more importantly, when you start calling folks you don't agree with fascists and dictators, it becomes hard to make others see real fascists and dictators when they arise. Besides when we consider things like the NEA Four and Piss Christ, it's hard not to argue that sometimes we artists bring it on ourselves.

What I do want to point out, though, are a couple of ways that these programs do help lots of people, beyond simply giving artists money to create work of debatable value.

The NEA and the NEH offer grants to local arts projects all over the country. I'm not talking about just big cities like New York and Los Angeles, but little podunk towns like Newnan, GA, where the local amateur theater company uses grant money to help fund acting summer camps for local children, pay some of the production costs for shows. These programs are important to these smaller communities because they allow people who cannot afford to go to a Broadway show, or even a show in their own nearby metropolises, to experience live theater, a tradition that is literally as old as civilization itself.

Museums are also funded by grants from these endowments. Again, losing funding to the MOMA in New York may not spell the end of Manhattan arts. There are plenty of rich donors lining up to help cover the operating costs of big city museums. However, in small towns, many learning museums, that is museums with hands-on activities designed as specific educational experiences for children, would almost certainly go under.

Many summer and after school programs designed to bring arts, theater, and literature, to schoolchildren will be lost.

Sure defunding arts programs doesn't mean that the arts will disappear, but it does mean that many lower income folks, especially children, will lose what little access to cultural literacy they have. The arts will be something for rich people only. 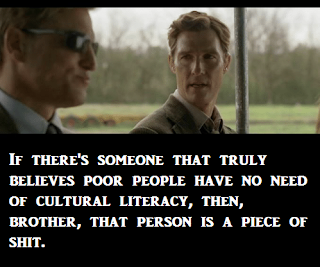 The NEH specifically funds projects that help raise awareness of veterans issues and help veterans cope with the stresses of civilian life.  Their Standing Together initiative seeks "to promote understanding of the military experience and to support returning veterans" by awarding grants to projects that "explore war and its aftermath, promote discussion of the experience of military service, and support returning veterans and their families."

In addition to funding documentaries that explore war and its aftermath, such as Ken Burns' The Civil War, this initiative funds more hands-on activities for veterans such as the Talking Service Project  and YouStories which use literature and drama to help returning veterans, their families, and their communities deal with the problems associated with returning home from a war zone.

They also fund The Warrior Scholar Project, which helps veterans transition from soldiers to college students by developing "the analytical reading, writing, and discussion skills critical to academic success while also learning about challenges to expect on campus." The Literature and Medicine program is designed to help Veterans Affairs staff better understand the needs of their charges. The Military History Workshop helps develop digital humanities in the field of military history.

I frankly find it ironic that the proposed budget seeks to expand our military (which is already funded as much as the combined military funding of next eight industrial nations), while effectively ending these programs designed specifically to help our returning military personnel. 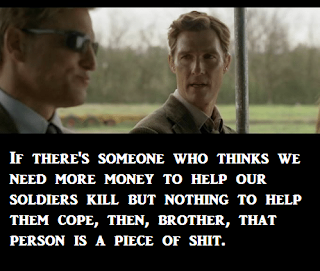 All of these programs that help communities, children and veterans will be severely crippled if not outright killed if the NEA and the NEH are destroyed. Fortunately, all hope is not lost. The new budget is simply a proposal. Congress has to approve or replace it, so at first glance this seems an empty hope: Both houses of Congress are controlled by the conservative party, which has always spearheaded the move to defund the arts. However, there are some conservative lawmakers who are apparently ready to fight these cuts. Let's hope they can recruit enough of their colleagues to at least throw the arts a pittance (starving artists are still better than dead ones, I guess).

Bill Kirton said…
As you say, Lev, the Arts have always been an easy target and in a shoot-out between the elites - politico-financial and cultural - only one side can afford bullets. It's a Philistine attitude which, in the end, devalues even education. Barbarism isn't too strong a word for what's going on.
23 March 2017 at 13:49

glitter noir said…
Well put and beautifully argued. What's going on is a tragic but inevitable extension of electing a President who regards all arts as useless. Except the Art of the Deal.
11 April 2017 at 01:32