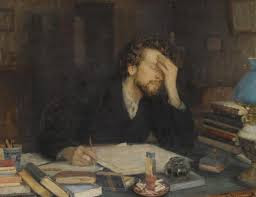 The cliched image of a starving author is of a shy and tortured creature huddled in a freezing garret dressed in tattered, dusty overcoat and fingerless gloves, scribbling furiously with a tattered quill pen by guttering candle light...
Well... okay. Maybe we aren't starving, though when you consider how advances have vanished in recent years it’s a fair bet most of us can’t afford to be without a day job; and maybe that overcoat is a favourite ancient woolly jumper; and maybe its not so much tattered as well-washed and the garret is your centrally heated back bedroom...  But the general theory is sound – isn’t it?
Writing is acknowledged to be a lonely occupation even by the most gregarious among us.  A great many of the writers of my acquaintance are shy flowers, at least when it comes to presenting their babies to the general public for inspection. It is a hard thing to proffer the words that you have sweated buckets to produce.
Social media does mean we can chat as we write, though most of us will recognise that unless you are incredibly disciplined it can be more curse than blessing. You only need look at the twitter and facebook feeds of most writers to see that most spend an inordinate amount of time ‘networking’
Writing gurus will advocate the need for platform building and networking across as many sites as you can possibly manage. Yet we all know that there comes a point where you spend more time building a following than writing something worth following.
Prevarication and displacement activity has never been easier!
That is the online activity and though networking online is important there is nothing quite like meeting and writers face to face. Having someone approach you, book in hand, and shyly ask for a signature is one of the most satisfying moments for almost any author.
I am not different in wanting to get away from the keyboard to speak with real people in real places and now that winter has (mostly) passed the events calendar is beginning fill up rapidly.
It set me thinking about the many ways we do interact with both fellow fictioneers and our readership.  On my Facebook invites list for this week:
One week containing book launches, readings, workshops, writing groups and festivals - and these are just some of the ways we get out of our garrets and into the literary maelstrom.
At the risk of cliche - these things are like buses and after a winter of near hibernation it just so happened that they all came along at once, which is shame as health issues dictate there are only so many things I can cram into seven days without crashing and burning!
Social media has made the world far more accessible – allowing us to connect with the world. And one never easier to search out those events. From March to December there are literary festivals and conferences in every county that you can attend, with your box of books tucked under one arm, with new ones springing up ever year.


Yes it is hard to find your audience, but that doesn’t mean you can’t have fun while you are doing it.
Authors Electric Blog jan edwards writing; facebook; networking; garrets; events; literary events