Meanwhile, in the Real World (by Cecilia Peartree)

By Cecilia Peartree - April 05, 2018
Somehow I have got myself involved in organising a writers' event in the real world. This is the kind of thing I never quite mean to do, because I know from experience that there will be a lot of work in it for very little, if any, reward. But on this occasion deciding to organise a writers' event was the lesser of the evils. The original idea someone suggested to me was that I, and another writer who lives locally, should have a stall at the local summer fair and sell our books from it in aid of charity. So I came up with the idea of an actual writers' event as a way of minimising the risk attached to the occasion.

At least we will be under cover, protected from the extremes of weather that often occur in Edinburgh in June, and (probably) not surrounded by the smell of burgers cooking on a barbecue, and the unpleasant noise of people complaining. 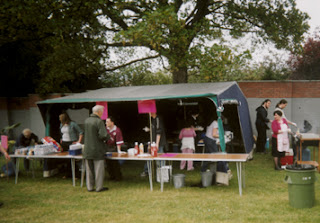 I hate the local summer fair, which takes place every other year in our part of Edinburgh, with such a passion that I am notorious for finding ways of avoiding it which range from going to Finland that day to developing arthritis in most of my joints. I am hoping the writers' event will provide me with a suitable alibi this year.

So what will happen at this literary extravaganza? The other local writer concerned, who also seems quite happy not to have to man a stall in the local park in all weathers, has suggested we use something called PechaKucha, which is apparently a Japanese method of making sure nobody speaks for too long at a time. He helpfully provided a link to some information about it, and I can now reveal that it means each speaker uses 20 slides, which are displayed for 20 seconds each, and that the speaker is not allowed to overrun these limits. I must admit I didn't really envisage any of the speakers using slides at all, and in any case I doubt if we will have so many that we need to restrict their allocation of time, but I think I can see the point of it, and I wish we could find a way of adapting it for use in our committee meetings!

We are both now in the process of rounding up more writers, and I think there should probably be at least six of us. I was thinking in terms of holding a sort of panel discussion, with someone moderating it as they usually do at the Edinburgh Book Festival, and then a break during which we might do a small-scale book signing and informal chat with refreshments, and then another discussion with a different set of writers. If there is enough common ground among some of the authors to divide the sessions by genre or in some other way, that would be good, but I think it will depend on which writers I can talk into coming along. I suppose we could replace one of the panel discussions with a session in which the writers introduce themselves - with or without slides - in some sort of time-limited format. I am also mulling over a raffle and/or some sort of competition - maybe writer bingo would be interesting. 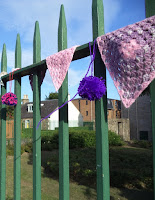 If anyone reading this is interested in joining in the fun, do please let me know! More information is available. I can see that if we use this PechaKucha thing we will definitely need more writers.
The event is not going to take place in isolation, but as part of a 'Festival' that will take place the week before the fair, so there will be a bit of a buzz around anyway, and I'm hoping we will get some sort of an audience because of that. Last time the 'Festival' included random events such as bicycle workshops, guided walks, music evenings, children's magic shows and yarn-bombing. In case I don't have enough to do, I'm trying to set up a short film event too.