WHAT A LAUGH by Fran Brady

Easter Monday and I am thinking of the first time I offered my services to the Edinburgh Easter Play. It was the earliest Easter for forty-odd years: the third weekend in March. It was also possibly the coldest, with Princes Street Gardens showing only a few snowdrops pushing through rock hard ground.

I had been enthralled since The Play began three years before, watching the actors in biblical dress enacting some famous lead-up scenes: the loaves and the fishes; Jesus routing the unscrupulous vendors outside the temple; the Pharisees debating Jesus’ fate; the last supper; and Judas’ act of betrayal. And then, the climactic scenes: Jesus tried, condemned and flogged; Gethsemane; Jesus carrying his cross; the Crucifixion; and the Resurrection. 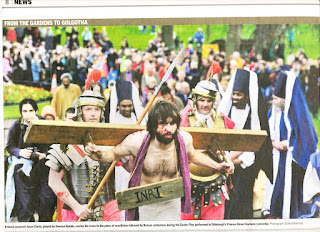 It is a ‘promenade play’, in the style of a medieval passion play. The Gardens, with their stunning backdrop of Edinburgh Castle, provide plenty of spots for the various scenes. The cross is carried by a sagging, bleeding Jesus (very effective stage makeup) across a footbridge over the railway track. Christ is crucified on the lower, grassy slopes of Castle Rock. By clever stagecraft, his body is spirited away, and he reappears shortly afterwards, now wearing a dazzling white robe, weaving his way into the watching crowd from the back, so that they turn in surprise and a ripple goes through the crowd: ‘It’s Jesus!’

I was excited to be given the job of looking after a team of ‘Welcomers’, who would be stationed at the nineteen gates and entrances to the Gardens. Not to ask for money - the performance is quite free - but to give people leaflets about The Play, direct them to the action and answer questions that people might have, as they perhaps stopped at a gate and asked what was going on. A large part of the purpose of The Play is to attract people into the Gardens, and there make them remember exactly what it is that Christians celebrate at Easter. There are always a lot of church-going folk there; but also many tourists and visitors to the city, as well as people who just happen to be taking a route through the Gardens or walking their dogs.

I had about thirty Welcomers and I went to meet them the week before to brief them. To my surprise, they were from Brazil! A contingent of students on an exchange programme, who had all caught wind of an appeal for help with The Play. A more delightful, friendly, willing, enthusiastic bunch of early-twenties you could not wish to meet. They all, to a man and woman, had broad, beaming smiles and did a great deal of hugging and laughing uproariously. I had to hope they were laughing with me. They were going to make wonderful, warm welcomers.

The only trouble was that they spoke about ten words of English between them. I efficiently handed out my briefing sheet, a copy for everyone. I found most of them in the bin at the back of the church later. I moved on to oral communication (speaking louder and louder, as you do), and then to sign language (not BSL), and then to just grinning and hoping.

We had been having a very cold early spring/late winter (sound familiar?) and I cautioned them, with much miming and showing of pictures in a John Lewis catalogue, to wear very warm clothes. Bitter winds and snow showers were forecast for Easter Saturday. They all nodded cheerfully and almost killed themselves laughing.

On the day, they turned up in skinny, decorated jeans and light tops, the boys with flappy shirts, which almost took off in the freezing gale, and the girls in tight-fitting, cropped T-shirts and jackets, which exposed goose-pimpled brown midriffs whenever they moved. I, on the other hand, was dressed in so many layers that going to the loo was impossible.

I took them round the gardens and positioned them at all the gates and entrances, clutching their bundles of info sheets. I conveyed as best I could that, if they were asked a question by the public, they were to take the person/people to the first steward they could see. By this time - and the play had not yet started - they were all turning blue and it was beginning to snow. I thought of the poor actors in their loose, floaty costumes - clothes designed for a hot country - and I thought of Jesus, hanging on the cross with only a loin-cloth. I hoped the first-aid people were geared up for multiple cases of hypothermia. 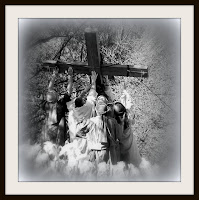 As The Play got underway, I noticed people, not in costume, darting around the actors as they moved from scene to scene and handing them something. On investigating, I discovered that these were hot water bottles. The actors could hide them in their floaty costumes, at least during the time they were walking from scene to scene. I thought of my poor Brazilian boys and girls. I waylaid one of the hot-water-bottle slaves and asked if there were any more and, if so, where were they? I was directed to the head gardener’s shed at the other end of the Gardens.

As I trekked towards the shed, I passed six different gates, fully expecting to see my Brazilians turned into ice sculptures. They were still hanging in there, although life expectancy was clearly dropping. I attempted to convey my mission to provide them with a source of heat, miming filling up a bottle, screwing on the top and then hugging it to myself. They nodded, still smiling - although their facial muscles were approaching rigor mortis - and several of them offered me a drink from their water bottles. So much for my mime skills.

I managed to locate five hot water bottles. Waiting for the antiquated electric kettle to heat the water took most of what was left of my patience, but I eventually staggered forth clutching my very hot, unwieldy burden. I dropped two bottles almost immediately, picked them up, dropped another three, picked them up, dropped one … Have you ever tried to carry five hot water bottles when you are wearing four layers of clothes and two pairs of gloves?

By the time I had trekked around all the gates and identified the neediest cases, the Play was almost over, and the bottles were almost cold. Unbelievably, my half-clad Welcomers were still smiling as they trekked back to base and returned the leaflets they had left over. Not one of them nipped off on the first bus home or for a hot cup of coffee in the Starbucks on Princes Street, which had been doing a roaring trade all afternoon with frozen playgoers. 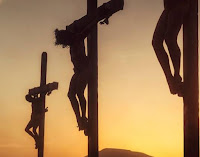 I thanked them all and expressed my very genuine admiration for their commitment and perseverance in the face of crippling odds. One girl found enough English to say what they were all probably thinking: ‘Hey! Eez Scotland. Eez always cold.’

‘Not usually as cold as this at Easter,’ I said, defensively.

They laughed a lot at that.

FRAN BRADY lives in Scotland, near Edinburgh. She is the author of four published novels which have a strong Scottish flavour. She also writes poetry, short stories, memoir and reminiscence stuff - and 'The Adventures of Max Bear' (serialised on her website), specially for her seven-year-old goddaughter.

Her website is: www.franbrady.com
Posted by Fran B at 01:30

Hugely enjoyable, Fran. Thanks very much, and well done for being part of such an inspiring event.

Thanks, Bill. It's always a triumph of hope over experience! But so worth it.

I really enjoyed reading this - a few of my theatrical friends have taken part in this over the years but now I feel as if I've found out the inside story!