The Power of the Short Story: Ali Bacon gets involved

By AliB - April 22, 2018
In a very busy week (book launch, book launch!) I found myself a last-minute stand-in for one of a a series of talks called Desert Island Books in which the theme was The Power of the Short Story. I jumped at the chance to contribute (isn't my novel at least in part a series of short stories?) then wondered if, as a somewhat reluctant short story reader, I was the right person for the job.

In fact the discussion was a good humoured affair - organised by the Friends of Redland Library in Bristol - with a very well-informed audience who posed some acute questions. I'm now cross with myself for not taking notes, but here are the topics I recall took  up most of our time.

Does the short story form give freedom or impose restrictions on the writer? 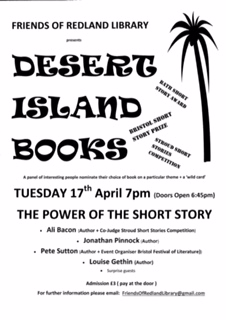 It was generally agreed that the short form at least brings freedom from the weight (physical and mental!) of a novel-in progress. Otherwise it was left to  Pete Sutton to suggest that just as poetic form (sonnet, villanelle etc)  grants a kind of freedom, the same could be said of the restrictions of word-count implied by a short story.

I understood where he was coming from, although it occurred to me later that for me to concentrate on a single episode or character also granted freedom from considering a wider and more complex story arc - yes, a plot! Which was probably how I came to write In the Blink of an Eye in the way I did. The wider story was in my head, but I resisted the desire to think about it while dealing with the immediate concern of the 'short story' or chapter I was working on. In retrospect I think this was a good thing, even if it began as an escape route - a virtue of necessity!


How has the short story developed in recent times?

I think the factor of length was mentioned - the trend towards shorter forms which are readable on a commute, flash fiction, and even story tweets. Also the proliferation of media outlets - audio, podcast and short story vending machines!

I thought it worth considering that short story styles mirror fiction writing generally, e.g.  the modern preference for 'close' view points rather than the omniscient narrators of previous eras. Which brought us to the next question..

What are the origins of the short story as we think of it?

Here was an excellent opportunity for us all to show off a bit with mutterings of Homer, Chaucer, Arabian Nights oral tradition etc etc until an audience member brought us to heel with a reminder of the antecedents of the literary short story which we agreed began in the nineteenth century. Serialisations were also mentioned - from Dickens to women's magazines today.

The future of the short story

I'm not sure this was addressed as a separate question, but as well as developments mentioned above, Jonathan Pinnock talked about the relative increase in short story publishing via small presses and also the trend to use short stories as the basis for a novel. Here I was a bit too excited at being held up as an example to notice who else came up, but I know I've referred to Ali Smith and Donal Ryan in this context before, to which I would add Kent Harulf's stunning Benediction.

Here are some of the other books and authors who featured in our Desert Island choices - with apologies for the lack of detail. (It has been a long week!)
Jonathan Pinnock - Labyrinths by Jorge Luis Borges, The Redemption of Galen Pike by Carys Davies.
Pete Sutton - The Weird Compendium edited by Ann VanderMeer & Jeff Vandermeer
Ali Bacon (me) - Sandlands by Rosy Thornton
Bertel Martin (http://www.citychameleon.co.uk/) Collected Stories of Aldous Huxley
Louise Gethin - stories by Roald Dahl

Thanks to my fellow panel members for their erudite and entertaining company and of course to  the Friends of Redland Library for the opportunity to meet and talk - and for the reminder of the huge part libraries play in our lives.

Ali Bacon's In the Blink of an Eye, is a novel in ten voices and nineteen stories , inspired by the work of early photographers Hill and  Adamson.
'Brings colour and texture to a story only told before in black and white.' (Roger Watson, Curator, Fox Talbot Museum, Lacock, Wiltshire)

'Written with insight and passion, I couldn't put it down.' (Rob Douglas, 21st century calotypist)

Available in paperback from Linen Press and on Kindle

Debbie Young said…
Very interesting post, Ali, thanks for sharing the experience of the event. Having published short stories myself before I started publishing novels, I was interested that one of my early reviewers commented that every chapter felt like a short story, despite the clear narrative arc of the whole book. I wonder whether there is less of a dividing line between the two forms than we often think. Looking forward to reading the rest of your book in the garden this afternoon!
22 April 2018 at 12:03

AliB said…
thanks Debbie - I think there is a lot more blurring between genres now - and fewer really long novels! Maybe TV also plays a part - drama series with connected but separate stories? Ali
22 April 2018 at 14:59

Umberto Tosi said…
Food for thought here: I can't decide is the opus I'm working right now is a series of short stories or a novel, or a collection or what... just doing it. Thanks.
22 April 2018 at 17:03