I am at that chatty stage of my new novel. It’s still new enough that I can  talk about it without boring myself rigid. I have 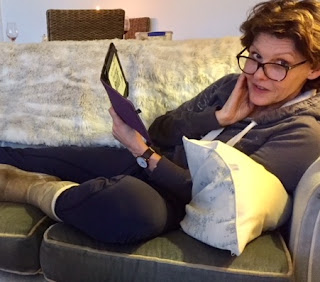 instead bored my husband rigid, not to mention a few other family members, who have all expressed just the right degree of enthusiasm. They know me well and they know they won't have to endure it for long: the chatty stage  won’t last. Soon, even a polite inquiry will be met with a grunt and an expletive and not long after that, the novel will be a topic that is simply not discussed. Ever.

Although this is a relative good moment in the  novel writing cycle, it is a slightly dangerous one because the story of the story gets shorter with each retelling. That’s great for elevator pitches, but as I’m more of a stairs girl myself  (and the backstairs at that ) I don’t need to make a story shorter and simpler, but longer and wilder if it is going to go the distance. I don’t like to know too much too clearly or I lose interest so fixing a story's form through conversation can kill it dead.
Luckily, I am not the only one doing the talking: my characters are bickering in the background, having coffee together, going to the pub speculating, gossiping even soliiloquising in the low level, largely ignorable way of the radio. I don’t think this means I’m mad. I hope it doesn’t make me mad. Whenever I catch myself thinking, I am thinking about the next scene, eavesdropping really. I rarely write the scenes I’ve overheard,  at least not in the way I’ve heard them. Maybe because, having imagined them one way, I have to write them another, in order to keep myself interested.
I realise this all makes me sound like some hyper active teenager with a low boredom threshold and a tendency to start projects she doesn't always finish, and apart from the teenage bit, that is not an unfair representation of my mental state. Finishing a novel requires me to walk this narrow, slippery tight rope  slung between the beginning and the end, knowing neither too much nor too little.
At some stage even this chattering will stop, the characters will only perform on the page and sometimes not even then. The tightrope will swing  and my balance will grow ever more precarious and it is all about somehow making it to the end before I fall off it altogether. Is that how it works for you?

Bill Kirton said…
In answer to your question, it would happen that way if only I could make myself step onto the tightrope. With my present intentions, the book that will be the last in my Jack Carston series has been researched, the notes have been collated and the characters are sitting there (patiently, I assume), waiting for me to let them loose. For me, though, there'll be no 'talking stage'. If/when they do get active, I'll be their slave exclusively until 'THE END'.
29 April 2018 at 10:11

Umberto Tosi said…
When characters start speaking for themselves without my
"thinking" words into their mouths, I pretty sure I've crossed a threshold. Then I have to figure out what they want and find the blind spots that can get them into trouble - that leading roughly into a plot. Works for me, anyway, except that I have no control on when and how this happens. Just have to keep writing and biting my nails. Sound's like you're well on your way to something lively and worth writing. Good luck!
30 April 2018 at 03:20