Aladdin's Cave is closing down - Griselda Heppel laments the loss of the Book House, Summertown

Two weeks ago I had the melancholy task of collecting a book from the Book House, Summertown, Oxford.  Before I am deluged with outrage that I could ever describe a bookshop visit as melancholy, I’ll explain that this wonderful, deceptively spacious (as estate agents love to put it) jewel of a bookshop is closing in June 2018, and they’d asked me to take back the one copy of Ante’s Inferno still on their shelves.

A younger sibling of the glorious Aladdin’s Cave that is the Book House in Thame, the Book House, Summertown, has been a fixture of this part of Oxford for nearly 30 years. During that time the Summertown shopping centre – as so many throughout the UK – underwent a sea change in character, with traditional stores giving way to coffee and charity shops. When I arrived in the 1980s, there were 3 butchers, 3 greengrocers, 2 newsagents, 2 off licences, a toyshop, pet shop, post office and, oh joy, a bookshop. All have gone now, with the Book House holding out valiantly years longer than the others. Life has changed, our shopping habits have changed and – saddest of all – so have our reading habits. We are all reading less than we used to; according to the wonderful Book House assistant Renee Holler (herself a prolific children’s author), sales are down even in children’s books, supposedly a growth area in the UK market.  Competition from ebooks, Amazon and supermarkets offering cut-price paperbacks add to the pressure and increasingly, it’s all too much for delightful independent bookshops like the Summertown Book House to withstand.

One reason for the decline in reading among children, according to the annual Understanding the Children’s Book Consumer survey from Nielsen Book Research, is that we are reading to them less than we used to. In 2013, 69% of preschool children were read to daily in 2013; five years later, only 51%. Parents of three to four-year-olds apparently ‘struggle to find energy at the end of the day.’ 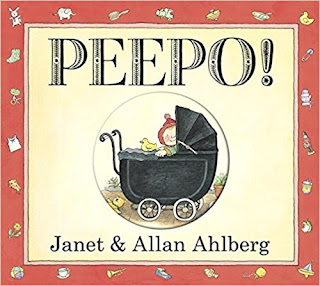 Call me a dinosaur (ooh, yes please) but this statement puzzles me as much as it saddens. Do these parents not put their toddlers to bed? In my memory, the nightly chaos of clearing up (rarely happened), cajoling squalling youngsters upstairs, into and out of the bath and finally to their beds, that moment when at last we sat down together and read Janet and Allen Ahlberg’s Peepo or Judith Kerr’s The Tiger Who Came to Tea was the gentlest, easiest and most relaxing of parental input. So relaxing, in fact, that I’d frequently read myself to sleep, much to the annoyance of the child on my lap who’d turn and pinch my cheeks awake again. How do these parents, who lack the energy to read to their children, settle them into their beds without it? 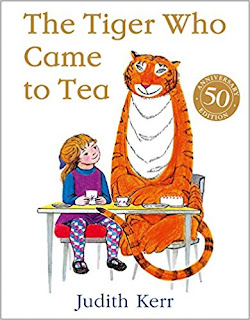 Now I have a 2 year-old grand-daughter, bedtime isn’t (yet) one of my tasks. But during the day she only has to set eyes on me to demand ‘Old King Cole’ (her current obsession, narrowly running ahead of Humpty Dumpty and the Grand Old Duke of York) before taking my hand and leading me to the sofa for a surfeit of nursery rhymes. I’m only too happy to comply, having always found reading aloud much less effort than creating imaginary games of Shops, or Lions and Zookeeper (to pick two of my daughter’s favourites when young). Their time will come, of course, along with the joys of television, ipads etc which for now the parents can control. But when it does, I’ll do all I can to keep alive this early love of books.
Meanwhile, a heartfelt plea: I totally get why Amazon is so successful. Online ordering is so convenient; I love having things delivered direct to my house instead of having to traipse round city centres trying to find them. So why not use the online ordering system operated by bookshops such as Blackwell’s and Waterstones? Often the prices match Amazon’s; you may have to wait a couple of days more for the delivery, that’s all. The difference is that you’re supporting not only the bookshops but also publishers, since while bookshops and wholesalers demand a 40 – 55% discount on the RRP of each title, Amazon is the greediest with its insistence of 60%.
And above all – as an 8 year-old girl at Pegasus Primary School (part of the Blackbird Academy Trust) advised the Duchess of Cambridge on a recent visit – read to your children!

Chris Longmuir said…
Great post. My granddaughter's favourite book at bedtime was the Ladybird version of The Gingerbread Man. I read it so many times I could have done it from memory. I think it was the repetition she liked. As she grew up she went through phases of reading and not reading. She's 15 this week and it's a nonreading phase. Teenagers seem to have better things to do with their time (according to them). However, I reckon that once you're a reader you're always a reader once you get the teenage years done and dusted.
1 May 2018 at 10:16

Bill Kirton said…
I agree with every word, Griselda. I don't understand parents 'being too tired' to read to their kids. They don’t know what they’re missing. My own ‘kids’ are now in their 50s and I can still recite Dr Seuss’s Yertle the Turtle in its entirety, not to mention Mother Goose’s |Nursery Rhymes and lots of A A Milne. For me, grandchildren were different: first because their parents (one of whom is married to an actor who ‘does the voices properly’) enjoyed doing it themselves; and second because Granddad’s turn came at around 6 a m when he was woken by them leaping onto his bed and demanding an original composition.
1 May 2018 at 10:49

Dennis Hamley said…
First of all, Griselda, yes, the loss to Summertown - and to everybody - of the Book House is tragic. Do we know if the main shop in Thame is going too?
The decline of reading to children is, if anything, even more tragic and a disturbing symptom of the sickness which has enveloped our lovely country. Reading every night to mine remains a treasured and significant memory. Knowing that my grandchildren have been granted the same privilege by the same one-time children I read to so many years ago is a wonderful comfort.
1 May 2018 at 13:02

Umberto Tosi said…
Always sad to see an independent bookstore closing: You lovely post reminds me to be glad I read to each of my children as they grew up. Nothing beats that for bonding and sharing a love for words and stories. Now they read to their own. Thanks.
2 May 2018 at 08:29