We Are All Cracked - Fran Brady 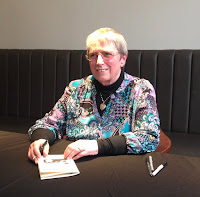 A couple of weeks ago, I had the privilege of attending a book launch in Glasgow. The author, Irene Howat,  is a writing buddy of mine and I like and admire her and her writing. She has been a prolific writer: biographies, poems, books for children and for adults. Her latest book, The Crackit Cup, just thirty-two pages long, is something quite special, if not unique. It is written in both Scots and English simultaneously, with Scots on the left page and its English translation on the right.

The story is told in verse, in the style of the great epics and sagas. But Tumheidit Tam (Empty-headed Tam), the ‘simple’ central character, would be amazed at being compared with anything so grand.  It is set during the First World War: all the young men in Tam’s village are enthusiastically enlisting; but Tam is rejected (due to his mental disability). ‘The King had nothing I could do for him.’ 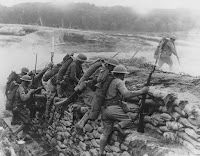 As the village gradually loses all its young men, it is Tam who shoulders all the hard, manual work; as the terrible news from the battles comes back to the village, it is Tam who comforts the bereaved women; as the shell-shocked men come back, it is Tam who listens without judging. Tam’s War (which is the title of the last poem) is a different one from the brave lads who fought and died, but no less heroic and vital. Tam may be rejected by the army as a simpleton, but he does a job as important and necessary as those on the Western Front - just as a ‘crackit cup’ can still hold water.

In her introduction, the author says: ‘Tam is the cracked cup - useful and still beautiful despite a little damage. The world is a better place for the likes of him’. We are all cracked in some way, but we can all still play an important part in the world.

From the first shots fired at Sarajevo, the author takes us to rural Scotland of a century ago, and the devastating effects of world events on those least likely to have control over them. It is a moving evocation of remarkable lives in obscure places. My throat tightened as I read about ‘full coffins and empty arms’, and of ‘round numbers’ of casualties. Not round numbers at all, they were: ‘Stuart who planted kale before he left’; and ‘Fritz, much-loved son of old Frau Krueger’.

‘The profound simplicity of the journey of the narrative is beautiful because it is built out of brokenness.’ Kenneth Steven poet.

Although I am Scottish, I am not a Scots Language speaker; so, I initially read the English alone. Then, I went back and read the Scots - and I loved it! Especially if I read it aloud. The author, Irene Howat, says: ‘English is my head language, but Scots is the language of my heart’. Getting to know this wee book has given me an understanding of why she feels that.

You can read the whole book in less than half an hour but it will stay with you for a long time.

Fran Brady is the author of four published novels and is currently working on her fifth. She also writes short stories, memoir and reminiscence pieces, poetry, and children's stories. Find out more about Fran on her website: www.franbrady.com

Bill Kirton said…
From just the few wee examples you give, Fran, it sounds as if this book expresses everything I feel each time I see photos or footage of those poor, miserable men and boys in the trenches and mud. 'Full coffins and empty arms' is so poignant. And your description of how you read the book and the impression it made on you guaranteed another sale for Ms Howat. Thank you.
2 May 2018 at 09:20

Cecilia Peartree said…
It sounds like a very moving book - sometimes the books with fewest words say the most.
3 May 2018 at 20:14