And finally... Russia by Elizabeth Kay


Several years ago I wrote a book set in an imaginary ex-USSR country, Karetsefia. It drew on my experiences in Poland, the Czech Republic, and Ukraine. It was called Beware of Men with Moustaches.

I had a lot of fun with it, and it was shortlisted for the Dundee International Book Prize in 2013. The story concerned a group of poets who have been invited on a cultural exchange, but it turns out there’s a hidden agenda. As the daughter of a Polish refugee I have always regarded Russia with suspicion – it’s in my blood. Nevertheless, I felt the time had come to see it for myself. I have O level Russian, but I got that fifty years ago, and was pretty sure I had forgotten it all! I booked the holiday some time ago, long before the events in Salisbury, and was bitterly regretting my decision. However, everyone was very nice, and seemed rather unaware that there was anything going on elsewhere. Moscow seemed friendlier than St Petersburg, although the cabin crew on the BA flight said it was the other way round for them. They are not allowed visas, so the only people they meet are the ground crew, which may explain it. The electronic noticeboard in St Petersburg Airport was rather a surprise, though. It read:

Beware. A propaganda bullhorn is at work here.
The longer you watch the more upset Hillary Clinton becomes.
Come closer, and find out who we are planning to hack next.
Missed a plane? Lost an election? Blame it on us.
The CIA calls us a propaganda machine. Find out what we call the CIA.
Yes, we are the ones the French president is lying about lying about him.(sic)

I was part of a group, and we went to all the tourist places – in Moscow, the Kremlin, Red Square, and the Moscow Metro, which is amazing.
The Tretyakov Gallery was a revelation, as very little seems to be known in the UK about Russian art of the past. I discovered to my surprise that I remembered quite a bit of the Russian language, that I understood a certain amount of what was said to me, and I was always understood in return, even though my grammar was execrable. Everyone was surprised that it had been possible to learn Russian at a state school in the UK, and my efforts at communicating were always very well-received. This is not at all true in other countries, which shall remain nameless! In St Petersburg we visited the Winter Palace, with more chandeliers than I've seen in my entire life, the Hermitage, the Summer Palace and the Faberge Museum. By the time I got to the Summer Palace the extravagance was so over-the-top, with gold leaf everywhere, that I could quite see why they had a revolution. I had been aware of this penchant for extreme decoration in my previous visits to Ukraine – even extending to shoes. Here are a few excerpts from my book: 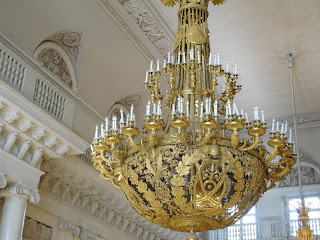 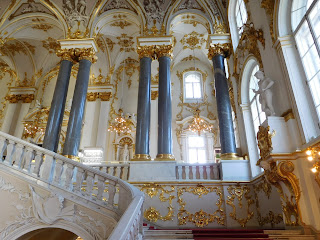 A middle-aged woman with bright pink lipstick spotted the four of them immediately, and arrowed over. She was wearing ludicrously high heels, decorated with what appeared to be barnacles and seaweed. She stopped in front of them and said, “Professor Stevens?”

…Julie bought some perfume. She didn’t normally wear it, but all of a sudden it seemed like the thing to do. Then she went completely mad and bought a pair of blood-red high-heeled shoes, decorated with sea horses.
“I bet those sea-horses are real,” said Sybil, as they left the shop.
Julie looked at her in horror.
“Of course they’re not,” said Ferris, giving Sybil a dirty look.
They had lunch at their previous venue, and when they returned to the hotel the journalist who was to interview Steve and Ferris was already waiting for them. She was wearing a pair of shoes with golden ammonites embedded in the heels.
“Are those fossils real?” asked Sybil immediately.
“Of course,” said the journalist. “They’re pyritised Hildoceras.”

…The cakes were divine. There was a strong similarity between shoe design and cake decoration; it was easy to believe that people switched from one profession to another, taking their themes with them as they went. The barnacle and seaweed motif was equally at home in either leather or marzipan.

It is well-known that the Amber Room in the Summer Palace was dismantled and removed by the Nazis, and has never been found. It has been re-created since. The walls are amber, the floor is amber, the chandeliers are amber… When you consider that amber is only found in relatively small pieces, being fossilised resin, the amount of work that went into creating just one wall was considerable. Our guide suggested that the original might be found in Fort Knox. But when she told us that Rasputin had been murdered by the British Secret Service she was greeted with laughter, which did not go down well. The Faberge Museum is small, but fascinating. and it's very easy to spend a lot of money in the gift shop.
I really enjoyed my visit. Russian champagne is still only £4 per bottle, twice the price it was in Ukraine ten years ago, but I wasn’t complaining and it is very good indeed. And caviar is a fraction of the price it is over here. So once more, I discovered that you really can get fed up with champagne and caviar for breakfast.
Our biggest extravagance was going to the Bolshoi. There’s a link below to YouTube, of the same production that we saw of Spartacus. It was breathtaking. The tickets were very expensive, but a third of the price they’d have been if we’d bought them online over here. Our guide had a contact…

Umberto Tosi said…
Fascinating! Thanks for taking us on your illuminating tour.
17 May 2018 at 11:09

Celina angel said…
This Stupid free Advertising give me 18 sales per day https://salesclickz.wordpress.com
17 May 2018 at 11:59

Bill Kirton said…
I loved this, Elizabeth, not just for itself but for the reminder that I read the book ages ago (but, mea culpa) never got round to posting a review, which is unforgivable because I did enjoy it a lot. So belatedly, a word to fellow AEs, get it now. It's an excellent, highly enjoyable read.
17 May 2018 at 17:27