No, I don’t mean those times when you hear a recording of yourself speaking and shudder with humiliation and embarrassment, though I’ve experienced that too. (Where did that flat-vowelled squeaky-voiced twelve-year-old with a frog in her throat spring from?) And no, I’m not at all ashamed of my Yorkshire accent – just amazed that it still survives after all these years of living in many different places.

Anyway, the subject under discussion is not my speaking but my writing voice. Anyone else get those times when you can’t write ten words in succession without recoiling in disgust? You may have an exciting new novel buzzing in your head, a bunch of characters all ready to express themselves and a plot worked out, if not down to the last detail then at least with some idea of what’s happening and when. But the actual words and sentences... it’s not so much that they won’t come as that when they do they make you want to rip up the page or clobber your keyboard in fury at their pretentiousness, awkwardness, banality… whatever the judgment happens to be on that particular day. 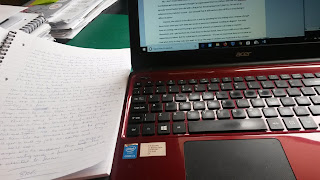 And the reason – it’s simply because the words are your own. You’d never be as hard as that on any other writer’s work. Even as an editor or critic, you’d read it and perhaps decide some changes would be a good idea. You’d adjust a comma or two or point out you couldn’t tell who was speaking or that Mavis had blue eyes in Chapter One – but you wouldn’t recoil in disgust and hate the writer for ever imagining they could write at all. Yet you do it to yourself.

Or is that just me?

Anyway, I’ve discovered a way round it that seems, so far, to be working. It involves tricking your brain into thinking you are not the author. You take the pen out of your own hand and give it to one of your characters. Over to you, you say, and you really mean it. This is your book, or your bit of it, from now on. Of course, this results in first-person narrative, which is fine by me. If I later decide it would be better to use third person, I can change it. I can make edits just as though it were someone else’s work – because it is. I may choose to correct my character’s style, grammar, consistency of eye colour and anything else I choose, or I may leave it as it is. I don’t hate it, because I didn’t write it. I’m simply the scribe and we make a good team. Sometimes, believe it or not, I can almost read the writer’s mind. Occasionally I might enjoy one of her (or his) turns of expression. Or maybe not, but that’s OK.

It's such a relief.

I took this remedy/trick/evasion to such lengths that I’ve just produced a novel that’s the product of an (imaginary) writing group, where the members take it in turns to have their say. It felt more like listening (or reading) than writing. It was fun.

My next book, now at the planning stage, won’t be in this style, or not by the time it’s finished. It can’t be, because of the nature of the story. But I’m going to write it in a similar fashion – giving the pen to each character in turn and letting them tell their own part of the story; giving their own view of things. Later I will edit, and it’s possible that few if any traces of the hatching process will remain. We’ll see how it goes. The main thing is (I hope) that I’ll feel free to read the early drafts and change them, with no need to suffer that awful humiliating feeling that the words came out of me.

If anyone reading this has suffered a similar can’t-stand-the-sound-of-your-own-writing-voice and found a way round it, I’d be really interested to know.

Now out in paperback, price £2.95 from Amazon UK
From the Heart of a Copy Editor... 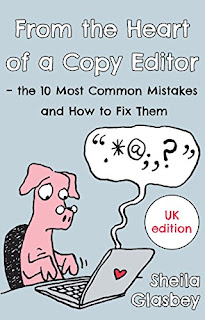 Umberto Tosi said…
Yes. I know how that is. And yes to letting characters and fictional narrators take the lead (and the rap.) I'm with you, and judging from your works, you do it quite compellingly. Thanks for the thought-rendering post.
4 May 2018 at 02:50

Bill Kirton said…
I suppose it afflicts me in a different way, Ros. I rely on my characters for everything. I just sit here, watch what they do, listen to what they say and write it all down. At first, I've only a vague idea of who they are, where they're going, how they're going to behave, but they soon let me know and I put it on the screen. All of which is a bit of a problem when there are none in my head waiting to be let loose.
And that all seems to be contrary to the first advice I give any would-be writer who asks for it, which is 'Trust your own voice'. I don't understand the alchemy, but I'm glad I have access to it.
4 May 2018 at 13:06

Rosalie Warren said…
Thanks for these interesting responses, Umberto and Bill. Sorry for the delay in replying - I was travelling all yesterday and am now in Vancouver B.C.!