BEFORE HARFLEUR by Bill Kirton 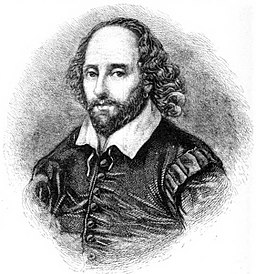 Those uncomprehending one star reviews can lead to despair, but don’t let them dishearten you. It’s happened to the best of scribblers.

Samuel Pepys found Midsummer’s Night’s Dream ‘insipid’ and ‘ridiculous’ while Tolstoy thought all the Bard’s plays were ‘trivial and positively bad’ and that he was ‘an insignificant, inartistic writer’.
So here’s an imagined exchange to keep that pen or those keys moving.

HENRY: Yeah. I got this army to lead into battle in a minute, I can’t seem to get ’em goin’.

HENRY: What is it?

SPIN DOCTOR: Special speech. Thought one might be needed. I just wrote it. You can ’ave it for a guinea.

HENRY: Let’s have a look… (HE READS THE PROFFERED SCRIPT) I can’t say this. ‘Once more unto the breach, dear friends, once more, or close the wall up with our English dead.’ You’re round the bend. ‘Our English dead?’ They think the only danger is from syphilis when we get to Paris.

HENRY: Yeah, look at it. ‘Now set the teeth and stretch the nostril wide.’ Like talking to a sewage convention. And what’s this bit? ‘Cry God for Harry, England and St George.’ I’m not ’avin’ this lot calling me ’arry. Took long enough to get ’em to call me ’enry. And they still get the number wrong. Who are you, anyway?

HENRY: Oh yeah, I’ve heard of you. Not all that successful by all accounts.

HENRY: Well, I was talking to the Danish ambassador the other day and…

SPIN DOCTOR: Ah. Not my fault, Squire. That was his bloody prince. Couldn’t make his mind up. I even had his bird Ophelia fixed up with the European Interflora concession and she goes and falls in that bloody river.

HENRY: Oh yeah, and what about the Scotch bloke? You didn’t half bugger him up.

SPIN DOCTOR: Who, Macbeth? Not my doing, Sunshine. Forestry Commission did a reclamation job on Birnham Wood. Not in the schedules.

HENRY: You’re the kiss of death, mate. Especially for royals.

HENRY: OK, convince me. What have you ever done?

SPIN DOCTOR: Well, for a start, I did a lot for both parts of your father, and who’d heard of him when he started, with a name like Bolingbroke? And how about old Lear? Everybody thought he spent a lot of time up on the blasted heath. Not a bit of it. My spin, that was. Never left his geriatric ward.

HENRY: They all died, though, didn’t they?

SPIN DOCTOR: Listen, Squire, you can please yourself. From where I’m standin’ though, royals aren’t exactly flavour of the month. D’you want this speech or not?

HENRY: I don’t fancy it much. Got anything else?

SPIN DOCTOR: Well, you can try this one. I was saving it for Agincourt, but it’ll do.

HENRY: ‘For he today that sheds his blood with me shall be my brother.’ ‘My brother?’ Look, if I said that to this lot, they’d be up at Kenilworth every night wanting to play darts. Anyway, I’m not shedding any blood.

SPIN DOCTOR: Please yourself. But I’ll be frank with you. When the fightin’ starts, the press are goin’ to be looking for celebrities. They’ll put ’em on tapestries but that takes ages. What they want is quick updates, soundbites.

HENRY: But I’m the king.

SPIN DOCTOR: Not enough, Squire. Nobody gives a toss about that any more. You want exposure? You need to modernise.  I s’pose I could do your Christmas speech for you.  That’d be two groats, mind.

HENRY: Got anything for a groat?

SPIN DOCTOR: OK, tell you what… I hear you’ve been seein’ that French bird, Catherine of Valois. I could do ’er a sonnet for Valentine’s Day. In English, o' course - none of your foreign rubbish. That’d be a groat’s worth.

HENRY: I’ll take it. You can shove the rest, though. You’ll never make a living out of writing.

SPIN DOCTOR: Nobody does.

Jan Needle said…
'Balls, my liege.'
Now, was that the playwright, the spin doctor, or (most likely, apparently) Paul Dacre? Strangely enough, Bill (is the shared name a coincidence or an affectation?) I once wrote a comic play about the Bastard of Avon with the last line: 'You'll never be writer, lad.'
As someone might well have responded, 'Balls, my liege'!

Bill Kirton said…
Jan, it wouldn't surprise me to hear that 'Balls, my liege' was the motto on the escutcheon, surcoat, or tabard which bears your family's coat of arms.

Chris, my lady, would you thus condemn me to a life of penury?

Umberto Tosi said…
Lots of fun. Came late but enjoyed your party swimmingly and left re-inspired to keep my pen moving, one-stars and spin doctors be damned!
13 June 2018 at 08:13

Bill Kirton said…
That's the spirit, Umberto. Just need to find a tongue-tied army leader, set your rates and you're laughing.
13 June 2018 at 11:02