Handing over by Sandra Horn


I’ve been thinking a lot lately about the pleasures and pains of handing one’s work over to someone else. I’ve enjoyed writing for performance ever since I was a child. We lived in a cul-de-sac  then, and the blind end had a street lamp over it which made the perfect evening performance space.  I can’t remember much about the scripts, although one play involved costumes made of raffia knotted round string to make ‘hula hula skirts.’ I wrote and directed them and carried on doing that through school, devising my own versions of My Fair Lady, Snow White, and a something Shakespearean with someone playing a recorder, for which I wrote the music. I can’t write music. When the hapless player asked me what key it was in, I said, ‘C’ because it didn’t have sharps or flats (what?) She gave me a funny look. Maybe I had/have a control-freak streak, but I knew how I wanted the parts to be played, my words to be spoken. I've gone on doing it intermittently ever since.

Writing for small children has been great fun. The first ‘go’ at Babushka was a play for children, performed twice at consecutive Christmases, once with puppets.  I also wrote a creation myth play for them, based very loosely on the Aboriginal Dreamtime stories. Fired up by these little successes, I wrote a script and lyrics for The Silkie and even cheekily got Sally Beamish interested in writing the music  (she’s lovely! and incredibly famous!) but we couldn’t get a commission for it, so it is languishing.

More lately, I’ve carried on writing for the stage but other people have directed. It’s been mixed. One student performance was something of a disaster when it became clear – on the night – that the Director hadn’t understood what it was meant to be about. He hadn’t asked me to sit in on rehearsals. I sat cringing in the audience and would like to have committed ABH on him. Then there was a piece of performance poetry – oh, cringe again! It’s called Echo and Narcissus. This is part of the third verse:

Echo, echoing the last word he said, which also makes a commentary. Clever stuff, I thought. The actress missed out all the echoes...Cringe again!

I’ve been much luckier with other things; Little Red Ella and the FGM was done brilliantly by Siberian Nights, and both my monologues for the Salisbury Fringe were performed extremely well. I’ve even sold one performance copy of ‘Encountering the Gods’ via Lazybee Scripts!

When it comes to handing over my stories for someone else to adapt for the stage, it’s been hard to know what to think.  Tattybogle, Babushka and The Moon Thieves have all been made into musicals, as I’ve no doubt said before, by a very skilled and experienced writer.  I did make some suggestions about the scripts, but they were not taken up, and there were additions I never would have made and don’t much care for. 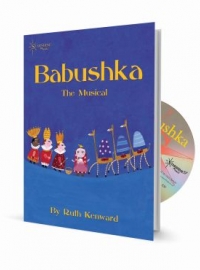 On the other hand, the songs and music are terrific and the shows have been pretty successful, especially Tattybogle, which has enabled us to keep the books going and, most astonishingly, got us that wonderful trip to South Korea, so what do I know? I know I want to try to do it myself, that’s what! So, I have. With songwriter Martin Neill, we’ve created a musical based on my picture book Nobody, Him and Me. 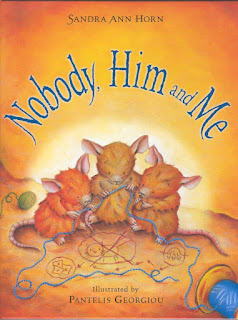 It’s been trialled in a school and the feedback was very enthusiastic  but lacked any details about problems, possible improvements, etc. We haven’t been able to get it published, which is either because it doesn’t work or because publishers of schools musicals prefer to use in-house writers so they don’t have to pay royalties. I’m still not sure which it is and was about to give up on it, but hope springs eternal, etc. So instead, we have had a couple of bound sample copies printed, together with leaflets, and we will be taking them to Hursley Park Book Fair this coming weekend to see if we get any takers. Am I being pig-headed? Do I not know when to admit defeat? Possibly. Probably. We’ll see.

Sandra Horn said…
Aargh! I wasn't at my best when I wrote this, and forgot - or suppressed - the keen young Director who tried to turn my Saturday Sitcom into a piece of physical theatre, with all the props in a box (why? why?) and the actors moving the furniture round...Absurdist for all the wrong reasons!
20 June 2018 at 07:16

Bill Kirton said…
For all the aspects of theatre with young people you note so entertainingly here, Sandra, there's one (mentioned just once) which I've always found makes it worth doing many times over - the fun everyone involved (perhaps especially the adult writer and/or director) seems to get out of it. Your post reminds me of many very happy (and instructive) hours spent with totally uninhibited and unpretentious kids with no thought of fame or celebrity who just committed to delivering totally honest performances and had a great time in the process.
20 June 2018 at 17:08

Cecilia Peartree said…
I loved reading this. I used to write plays (usually with elements of pantomime) with one of my sons for our local youth drama group to perform, and it was always great fun, though with the kind of hair-raising moments most amateur productions have.
Our writing process was so slow (one of us was a perfectionist) that we would have to release the scenes one at a time to the group, and part of the fun was to see the kids reading through them to find out what happened next. I think my favourite show was our musical version of 'A Christmas Carol' although of course it wasn't nearly as good as the Muppets' one.
24 June 2018 at 10:46