By Debbie Young - August 30, 2018
After a fortnight's holiday near Glencoe in a minimalist cottage and abundant fresh mountain air, I returned to my own cluttered cottage ten days ago determined to ditch surplus possessions. Even (whisper it) a few of my large collection of books...

Fate sent me a helping hand in the form of a request from the landlady of Dinneywick's pub in Kingswood, the next-but-one village from where I live in the Cotswolds. She asked me whether I could donate any secondhand books for the pub's new free library scheme.

I've had a Little Free Library on my front garden wall for a couple of years, and there are more like this popping up all over the country.


A Bookish Pedigree for a Pub

Aggie's interest in doing something similar came as no surprise. When she and her partner Guiseppe ran The Fox in Hawkesbury Upton, they gained a reputation as an innovative, energetic couple full of ideas for keeping a country pub afloat. One of these ideas was to support the first ever Hawkesbury Upton Literature Festival when I founded it four years ago. They generously provided the venue, and for the next two Festivals were a key player in its success. As a tribute to their support, the cover of the first Festival's anthology sported a drawing of The Fox by Festival author and illustrator Sophie E Tallis.


Earlier this year they moved to the delightfully quaint Dinneywicks pub in Kingswood, near Wotton-under-Edge.

Dinneywicks customers will be able to borrow books for free from the Dinney's Little Library whenever they drop into the pub.

This is a valuable social service to a small rural community without its own public library. Customers are welcome to access it at any time during opening hours. Aggie is hoping that it will encourage people to come in for a coffee and chat during the day, as well as during the busier evening hours.

The eagle-eyed reader familiar with my Sophie Sayers Village Mystery novels may spot a brand new set of them on the second shelf down at the right hand side. I was happy to throw those in for free for three reasons:


When Free Books Act As Ambassadors for Authors

It's a similar situation to finding a book in a charity shop or jumble sale. When a reader picks up a book for £1 or even pence there, the author may not profit from that sale, but he does gain valuable exposure and a connection with a potential new fan. That fan may go on to snap up full-price copies from conventional bookshops after that. 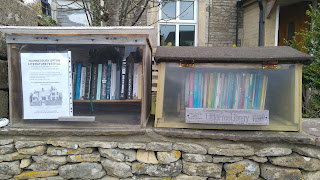 I confess I only made this connection a few years back when I was interviewing Hereward Corbett, the proprietor of The Yellow-Lighted Bookshops in Nailsworth and Tetbury. I asked him whether he minded so many charity shops selling books in those towns, assuming he'd view them as competition undercutting his prices.

Not at all, he told me, because readers would often take a punt on an unknown author, and once hooked came to his shops to order brand new copies of their other books at full price.

I wish Aggie and Guiseppe every success with their new venture, and I hope their example will encourage other pubs to follow suit.

Of course, Dinneywick's isn't just about books: it's a delightful pub, which they've just refurbished to a very high standard, with a cosy, attractive interior, pleasant walled garden and terrific food. So if you're passing that way, do call in to see them - with or without a book to donate! 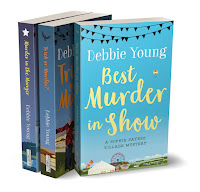 Katherine Roberts said…
There's a little free library on the sea front at the beach hut end of Paignton beach. It works by donating a book you've finished reading and taking another book out of the box in return... perfect for those beach-read paperbacks!
30 August 2018 at 17:52