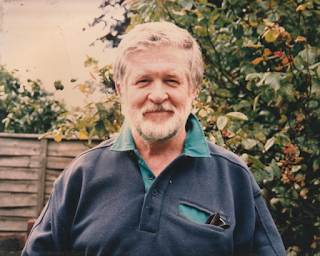 Today would have been my father’s birthday - a once forgettable date, lost between Christmas and New Year which led to rather a meagre birthday present haul. I never forget it now.
He died twenty eight years ago, a few months before his 58th birthday, the very same age that I am now and I still miss him desperately.

He was a painter who gave up painting for twenty years - from my early childhood until his early (and too brief) retirement. He gave up because it was impossible to combine painting with earning enough to support us. He was good at what he did and exhibited widely before I was born. Would he have ‘made it’ if he’d carried on? Maybe. Did he regret the sacrifice ? I don't think so.


Anyway, the struggle to find time to teach, paint, and be a family man was too much. I still have a portrait of me he began when I was about four. I outgrew the dress I was wearing before he was able to finish it, which says it all. Consequently, I grew up with the knowledge that doing what you love is a privilege not everyone can afford.

My father always fostered my ambitions, even my mad decision to give up teaching, study for an MBA and become a business woman. He thought I was bonkers, but supported me none the less. He died before I discovered what he had always known - that I wasn’t really that kind of person.

I began writing only after his death, when suddenly life seemed short, precarious and altogether too precious to waste on work I hated. I had always wanted to write ‘one day,’ but dying days are certain and ‘one days’ aren’t.
He never saw me published and never met three of my four children.
Whenever things go badly with my writing, which if I’m honest is often, I wonder what his advice would be. Would he tell me to stick with what I love, to seize the day, or to face up to economic realities as he had to do?
You hear so many stories of authors having huge success after many bleak periods of obscurity but you don't hear anything about the ones who carry on to no avail. I suppose the newsworthy story lies in the exception, the unexpected and not in the more common truth. 'Success' of course means different things to different people and I know that he cared most about producing good work, and later relished the pleasure, the luxury of having the time to produce any work at all.

I have no answer to the conundrum and still, after all this years, I long to ask him and hear his.

( A version of this post first appeared on http://awfullybigblogadventure.blogspot.com/ in 2010)
N M Browne

Enid Richemont said…
A heartbreaking but wonderful post, and so full of love for your father. Is there any link to his work?
30 December 2018 at 15:32

Nicky said…
I tried to post one, but failed!

Umberto Tosi said…
This moving tribute to your father reminds me of my mother, departed some 25 years ago, a talented opera singer of limited success, who carried on nonetheless. It's been a long time, but I still miss her.
31 December 2018 at 02:46

julia jones said…
Well I'm with you Nicky -- yes, it may be to no avail, I'm never going to become a famous or successful writer bu when I think about the things that truly matter to me, deep down, it's writing. It's part of my essential identity and that DOES matter. So, on we go ... (and respect to your dad)
9 January 2019 at 10:23

Karen S said…
He was my godfather and my father’s first cousin and close friend . A very talented artist , but , most of all for us as children he was a loving and extremely funny person . We laughed until we cried whenever we had family get togethers . Happy memories.
8 July 2019 at 19:37