Ramblings about rhyme by Sandra Horn

What with it being That time of year and the Big C word looming, I’ve been singing the odd carol now and then. I love them – but I think some of them have problematic bits. For example:

I wasn’t keen on singing ‘While Shepherds Watched’ to the tune of ‘On Ilkley Moor Baht ‘At’ either, but the Vicar said it was the original tune – and by the way, little known fact (by me, anyway): there are more tunes for ‘While Shepherds’ than any other carol. I pass this on in case it ever comes up in a pub quiz/Christmas Trivia, etc. 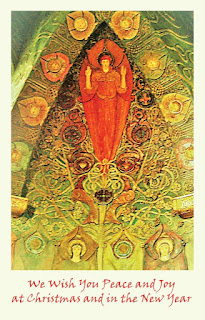 This was by way of a somewhat-sideways and twisted introduction to the real meat of the matter: the striving after rhyme and the horrors thereof.  I was once doing a school visit and asked the children what a poem was. ‘It’s short, rhymes and doesn’t make sense,’ quoth a child. The teacher smiled and nodded at her approvingly, which rather took the wind out of my sails. In another school in spite of trying to wean the kids off the idea of rhyme-at-all-costs, one spent ages trying to work out how to include the word ‘ponder’ in his poem because he needed something to rhyme with ‘yonder.’ Another one nearly gave himself a nervous collapse because he has a shipwreck caused by a tornado (I expect he hadn’t come across dado, but perhaps that’s just as well). I had begun to despair, but these were all primary school children, and when I worked with secondary level kids, the obsession with rhyme had disappeared and they had a much more sophisticated grasp of poetry – not surprisingly. Younger children are more exposed to jingly nursery rhymes and songs – quite right too and great introduction to rhythm – and later, as they read more widely, their grasp of the possibilities of language develops.

Obvious? You might think so, but there are adult writers of poetry around who seem stuck in that earlier developmental stage and use anachronisms, twisted sentence structures, oddities like ‘they did go’ instead of ‘they went’etc.  – anything In order to get a rhyming word on the end of a line.  Perhaps they were brought up on Tennyson and Wordsworth, who had it easy in some ways because the more formal language structures of their day allowed for rhymes that sat naturally, but aping Victorian English now doesn’t really cut it.

Some of the most successful modern rhymers are songwriters. Brilliant Cole Porter, for example. He’s often quite brazen and also very funny:

‘You’re the top, you’re Inferno’s Dante,
You’re the nose of the great Durante,’
Or, from Brush up your Shakespeare (Kiss me Kate):

And some, like Ogden Nash and Pam Ayres, are just outrageously cheeky, for the fun of it. Here’s Nash cursing the creations of the maker of a hat bought by his wife:

And here is Ayres reflecting on the state of things today:

It may not be very deep and meaningful, but it’s pithy and to the point.

Then there’s Edith Sitwell, hardly modern now, I suppose, but who sometimes wrote words-as-music as in Facade and rounded the poetic but sometimes nonsensical lines with rhyme, very satisfying, as is a rounded musical phrase:

But rhyming with serious intent is often a much more problematic affair. The slightest hint of contrivance and it’s dead. How to make a rhyme fall so naturally that it’s hardly noticed except that it feels ‘right’ is a considerable issue for a poet. Rhymes are not so much used now, it seems, and instead we tend to delight more in the subtleties of metaphor, rhythm, musicality, the ‘Aha!’ experience of the well-turned image – as in Norman Nicholson’s description of dandelion clocks, ‘held like small balloons of light above the ground.’ for example, or Alice Oswald’s River:

‘the earth’s eye
Looking through the earth’s bones
carries the moon carries the sun but keeps nothing.’
No need to mourn for rhymes when the poets of free verse give us so very, very much.

I enjoyed this, Sandra. What is it with vicars and the 'Ilkley Moor Bar T'at' tune? I joined my Christian partner, atheist brother and Hindu sis-in-law at a carol service last Christmas Eve and the young vicar had us singing something to that very unsuitable tune.

But for your main points -- yes, I am often lost in awe and admiration at the way poets like Duffy and Heaney -- or Arnold and Fanshawe -- put something so beautifully, seemingly without effort, while being constrained by poetry's strict form.

This was fun to read. I feel the same about 'Gaudete' having once, years ago, shared a house with two young men who liked to sing it, unaccompanied, in the kitchen very late at night after coming back from the pub!
I do like Ogden Nash poems. One of my favourites is where he rhymes Count Ciano with piano - I can't remember the whole verse and haven't got the book to hand so won't attempt to quote.

Lovely stuff, Sandra (particularly the primary child's definition of poetry).
I have two snippets to offer. First, my kids were inventive with their versions of the carols containing the lines 'O Come, Poorly Faceful' and 'Join the trifle in the sky' (Perceptive, eh?)
And my own rhyming was mostly saved for songs and sketches for shows we did at the Edinburgh fringe, gems such as:
'But for legitimate romance you'll
Want a girl that's more substantial'.
Happy Christmas.

Rhyme of the Ancient Obsessive-Compulsive..

An earnest young poet from Brookline,
obsessed over making his lines rhyme.
He suffered from angst
that he couldn't rhyme once-d,
And thus turned all his poems to crimes.

Bill and Umberto - thank you for the glimpses into your hitherto unknown (at least to me) extra talents! More, please!

Ogden Nash wrote a nice poem called "How be the little busy doth" about some of the ills of bad poetry.
)One of my favourite titles too.) Really Sandra what you seem to me to be saying is that you like good poetry (whether rhymed or not) and dislike bad. So say all of us! To the list of effortless rhymers. I would add Philip Larkin and, currently, Clive James. And Tom Lehrer deserves a mention as an outrageous rhymer, and in such good taste too (e.g. "My pulse will be quickenin'/With each drop of strych-a-nine/As we're poisoning pigeons in the park")

Yes, Bob! I should have included Bob Newhard and wonderful Flanders-and-Swan as well as Tom Lehrer (so long, Mom, I'm off to drop a bomb)but I ran out of time. 'Good poetry' though - not sure what that is, unless it's whatever makes my heart sing.