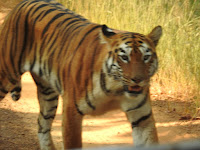 Tigers have played a big part in literature, from the factual in Jim Corbett’s Man-eaters of Kumaon to the literary in The Life of Pi, And then there’s the children’s market – Tigger, in Winnie the Pooh and Hobbes in the comic strip Calvin and Hobbes. Tigers seem to be able to represent just about anything, from the Nazis in The Tiger who Came to Tea, to the dishonourable side of man – Shere Khan in The Jungle Books. And in some way they all retain their basic nature; Tigger exhibits tigerishness, but it is muted to the less threatening play of a kitten:

Tigger said: “Excuse me, but there’s something climbing up your table,” and with one loud Worraworraworraworraworra he jumped at the end of the tablecloth, pulled it to the ground, wrapped himself up in it three times, rolled to the other end of the room, and, after a terrible struggle, got his head into the daylight again, and said cheerfully: “Have I won?”
“That’s my tablecloth,” said Pooh, as he began to unwind Tigger.
“I wondered what it was,” said Tigger.
“It goes on your table and you put things on it.”
“Then why did it try to bite me when I wasn’t looking?”
“I don’t think it did,” said Pooh.
“It tried,” said Tigger, “but I was too quick for it.”


Many years ago I wrote a radio play about an escaped tiger, and I went to Chessington Zoo before it became Chessington World of Adventures, to speak to the tiger keeper. Expecting a tiger enthusiast, my first question was, “How long have you been doing this?”
And the answer was: “Too long.”
He regarded it as one of the most dangerous jobs anyone could have – and perhaps, with good reason. Tigers kill more people than any other big cat, both in and out of captivity. In 2017 Rosa King, a keeper of fourteen years’ experience, was killed by one and Howletts Zoo has had three keepers killed by tigers. Nevertheless, they fascinate us. 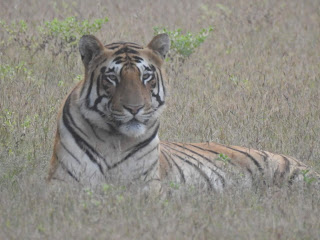 I had my first attempt at seeing a wild tiger in 1999, when I went to Dandeli Lodge in India. Tiger poo, tiger pugmarks, but no tigers. My second attempt was in 2014, in Bandhavgarh National Park. I didn’t see a single one, and it was with a certain amount of resignation that I decided to have a third go in October this year, in Tadoba, in Maharashtra State. Shortly before I left there were reports of a man-eater not too far away. Sadly, after I returned home she was shot, much to the dismay of many people in India who didn't regard her as a dedicated man-eater, just a big cat who'd been in the wrong place at the wrong time.
The holiday was amazing. I saw tigers on five days out of six, eight different individuals. But the star was undoubtedly Maya, who is now quite famous. Our guide has documented her life over the last eight years from when she was a cub, and written several articles about her. So it was a real privilege to see Maya close up – the closest our 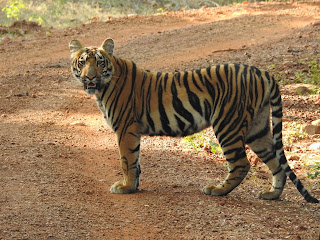 guide had ever been to her. We were in open-topped jeeps, and I could have leant out and touched her. She accompanied a clutch of jeeps down the road for a while, crossing back and forth from one side to the other. She just seemed mildly curious, but the moment we made eye contact will remain with me for the rest of my life. I never felt threatened, despite the fact that she could have dispatched me in seconds. She was stunningly beautiful, in tip-top condition, and seemed to be fully aware of her public and their interest in her.

We saw another tiger freeze, one paw raised, and then hare off out of sight after a wild boar. The day before, we watched two spotted deer approach a tiger that was lying in the grass who saw them before they saw him. He flattened himself to disguise his outline, but they caught on and made a dash for it. 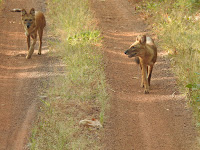 There were a lot of other animals that made their presence felt. I’d always wanted to see dholes, the Indian Wild Dogs, and we came across a pack of five of them. They’re the colour of dingos, but although they’re smaller they bear a strong resemblance to the strikingly marked African Wild Dogs. Two sightings of sloth bears, which aren’t scared of tigers at all, and a marvellous moment when dozens of green bee-eaters decided to have a communal dust-bath.
I took a lot of photographs, as you can see, but I don’t currently have any plans to write about tigers. I do intend to paint them, though!
A rather exiting moment occurred on my first night, when I found a small snake in the loo. It looked remarkably like a krait, which is deadly poisonous, so I hurried off to fetch someone. In the end the staff at the resort found three of them – but they were harmless wolf snakes, krait lookalikes. I went to India with Exodus, and it was my fifteenth trip with this particular company. They’re mid-range, and they are very good indeed. I’ve seen jaguars, lions, cheetahs and Iberian lynxes, although leopards continue to elude me. But my mind is now turning towards snow leopards, as our guide runs a trip there - in 2020, maybe. And they’re remarkably beautiful, too… 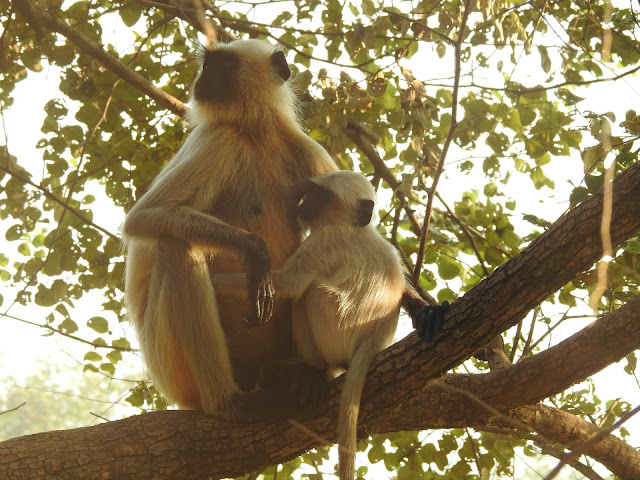 Lovely post! I am just back from the Sunderbans which is a gorgeous place but alas, we saw no tigers. I am glad that they are still flourishing though, especially in their natural habitat, despite the ecological threat to our entire world.

Thanks, Elizabeth. A lovely reminder of what a fascinating (and beautiful) world this can be when our own species with its embarrassingly narrow and often incomprehensible preoccupations isn't at the forefront.

What magic to actually see a tiger in the wild, a privelege so few of us experience. Thank you for sharing it. As William Blake put it:
Tyger Tyger, burning bright,
In the forests of the night;
What immortal hand or eye,
Could frame thy fearful symmetry? ...
... Indeed.

Dipika - what bad luck. I thought Sunderbans was pretty much guaranteed. Mind you, that's what they said about Bandhavgarh four years ago. Not much comfort, though.

Last year i went to a talk by the wonderful Judith Kerr, who professed herself highly amused at the theory that the tiger in the Tiger Who Came To Tea represents a Nazi knocking at the door. Now, it may be she was in denial.... but I've never been convinced by the idea (promulgated possibly by Michael Rosen?). The tiger is huge and furry, and the little girl cuddles it as it eats everything in the house. It feels more like an enormous, very hungry pet (or even a relation?) - there's never any sense of personal menace either to the girl or her mother, which I think you'd need if the tiger is really a metaphor for the Gestapo. Sometimes tigers really are just tigers.

That's really interesting, Griselda. I suppose I always thought the tiger didn't eat the girl because she was too small to be a threat. But clearly, Judith Kerr is the real expert on this!