By Cecilia Peartree - December 05, 2018
I tend to frequent various writing forums, and one topic that crops up fairly often is whether it's essential to outline your novel before starting to write. Discussions on this tend to stray into the different methods of outlining, and at some point people will usually express amazement that anyone can write a novel without outlining. This is rumoured to be particularly impossible in the mystery genre. 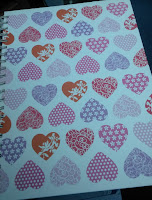 Although I'm very firmly on the 'not outlining' side of this debate, I do plan my novels as much as I can short of outlining. For my recent NaNoWriMo effort I started out having only a vague idea for (yet) another story in my mystery series, but during October I did write very short summaries in rather a pretty notebook of what I thought would probably happen in the first three chapters, mostly to make sure I got off to an easy start.

Last week, after I reached 50,000 words, I hadn't finished the story but I knew where it was going (thank goodness - that doesn't always happen) so I wrote short summaries of the final few chapters, mostly to make sure I actually got to the end without falling down any rabbit-holes. Part of my editing process, which will happen in the next few weeks, will be to list the chapters with a couple of sentences for each,  in case anything has got out of order in the timeline. I think this is my most common problem when writing.

Coincidentally at about the time I was finishing NaNoWriMo I also got into a discussion on a writers' forum about Myers-Briggs personality profiles. Interesting that this way of 'measuring' personalities has apparently fallen into disrepute just at a time when quizzes on Facebook and elsewhere can allegedly diagnose your personality according to whether you like fluffy kittens or venomous snakes better. Incidentally, I have now resolved, not for the first time, never to do one of these quizzes again after discovering that the monarch I most resemble is Elizabeth Tudor, probably my least favourite of all monarchs anywhere.

Anyway, the main point of contention in this case was to do with one of the traits, which can be either 'J' (judging) or 'P' (prospecting). I hadn't thought of it like this before, but I was interested in the idea that people who came out as 'J' might be more likely to be planners and outliners in their writing life, whereas the 'P's were those who just sat down and wrote, letting the story take them where it will in the hope that it will lead them to gold! As it happens, my own result when I did the test, which I didn't do online but as part of a training course at work, was only just on the 'P' side. I actually didn't understand what was meant by prospecting until I had a follow-up interview soon after the test, at which we discussed this in quite a bit of detail because the tester hadn't been entirely sure whether to score me as 'J' or 'P'.
So I suppose my writing method sort of backs up this part of the personality profile, although naturally the main point I seized on at the time was that the interviewer told me the reason I hadn't tidied up my desk was because I hadn't had a deadline to do so. From this I also extrapolated that I hadn't tidied my house because I didn't have to, having no family or in-laws likely to descend for a visit. Knowing this is the case hasn't actually made me do anything about it, but at least I don't feel quite as guilty. After all, I didn't choose to have the personality of a prospector.
Myers-Briggs NaNoWRiMo planning a novel

Umberto Tosi said…
Whatever the outsome, 50,000 words is darn good for October. I go back and forth about outlining and the Field-of-Dreams, "write-it-and-the-story-will-come approach. Glad to have your company. Whatever. You seem well on your way to another fine book. It helps to have experience. Thanks.
5 December 2018 at 20:49

Bill Kirton said…
There's no logic or reason to how I write but I never really know the outcome of a story until I've written the ending, which I then sometimes discard for one that I think is better. Apart from anything else, I don't want to inhibit my characters. Their autonomy, their ability to surprise me is part of the pleasure of writing. In fact, a lot of the time I feel as if I'm just an observer, writing down what they say and do. And yet, perhaps surprisingly, I still argue that 'fictional reality' always seems more meaningful, purposeful than the everyday variety we live.
6 December 2018 at 12:28